One of the things I’ll miss most about UMW is the UMW Console, it looks like it may even become a more permanent attraction that will highlight random years across the decades. For example, we recently secured a Nintendo Virtual Boy for when we choose to time warp to 1995 or 96. 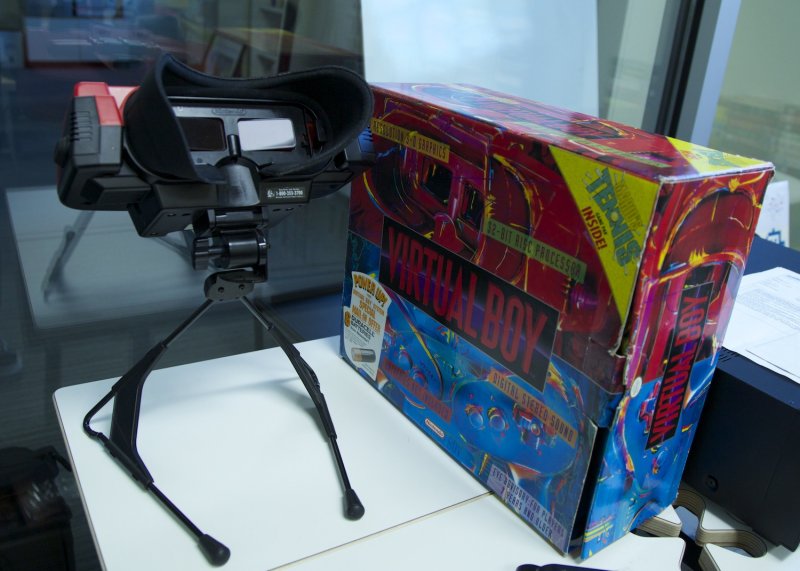 I’ll have to enjoy most of that remotely, but something Zach Whalen is working on right now has me pretty fired up. But before I go there, let me say that collaborating with Zach on this whole thing has been the single best collaboration I’ve been a part of at UMW. He is freaking awesome. I’ll really miss the way he just locks into a project like a pitbull, and quietly makes it all happen. He’s a real source of energy and inspiration for all things digital at UMW, and that may be no where more apparent in the project he is working on currently. Michael Branson Smith (MBS) came to UMW in April and he demonstrated how you could use a Raspberry Pi and a short-range TV broadcaster to create a list of videos and broadcast them over a local frequency that the old school tube televisions in the UMW Console could pickup and play on a designated channel. It was/is/and forever will be extremely cool.

MBS created that day of programming by editing together shows and commercials into a seamless set of 10-12 files that represented the shows for the day. For the last month or two Zach has been taking what MBS has done and started writing what is basically a TV scheduling program for the Raspberry Pi that will automatically add commercials from a pool of potentially hundreds whenever there is a break in a show. It will also be able to synch the time you turn the Pi on so that it automatically knows what the closest part of a show would be given the time of day. And the space in between when you turn on the Pi and the next time appropriate part of a given show is filled in with commercials. This program could enable us to effectively add commercials and shows to a Pi and have the machine do most of the more detail orientated scheduling with an element of randomness. There will still be the work of editing commercials and commercial breaks into shows, but after that you have a pretty granular scheduling system for any given network on any given day. It’s not all done, but the concept is there, and Zach has been getting closer and closer every day.

But none of that is what I was intending on posting about, what I wanted to share are these four 1-minute episodes from the 1985 series Computer Critters (not sure it had any more than 4 episodes). One of the interesting things about these short pieces is the way they they build on each other.

The first episode reminds everyone that computers are everywhere: elevators, airplanes, etc.
#1 Computers are Everywhere

The second episode explains what input devices are, such as keyboards, the n=mouse, etc.

The third episode tries to establish how these machines are actually useful. For instance, how they can help you organize your comic collection or recipes. The power of databases!

Finally, the fourth episode introduces the most practical use case for a computer yet: word processing. [Although I imagine the lost 5th episode was about games 🙂 ] How computers can help change the way we imagine writing. And interesting idea given how much that new way of writing is completely dominant now, there doesn’t even seem to be an old way although as recently as 1985 computers were still being evangelized as a thing to be taken seriously.

I love these short series on educating an entire generation about the coming shift in how we will experience the world. there is a moment in one of these videos where two of the younger critters exclaim “we are the computer generation.” This is a far less compelling series, not to mention foreshortened, than Canada’s Bits and Bytes educational TV series about computers, it comes highly recommended, but it certainly suggests the 1980s was fairly self-aware of a coming computer generation that would be effectively transformed by this technology, and say what we will about their limits and possibilities, by 2015 it has more than come to pass. This is one of the things I live about the UMW Console, it can highlight this through the culture of 1985 in some strangely popular and subtle ways at once.