ds106radio is neither radical nor safe, it’s an experiment 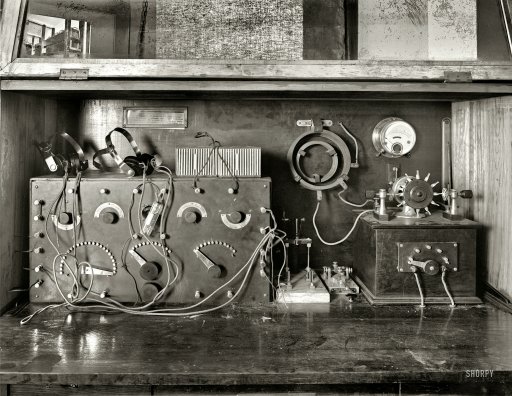 A week or two ago Alec Couros tweeted a few questions about the appeal of ds106radio and its seemingly deviant relationship to copyright and/or licensing. You can see his tweets below:

The question as it pertains to copyright was followed up brilliantly by Giulia Forsythe in this blog post (where a conversation like this might have a bit more space to stretch) in which she lays out a number of approaches to the idea of copyright and something like ds106radio. She argues, as Dr. Garcia did as well on ds106radio (Update: here is Dr Garcia’s 4 minute “Editorial on Deviance and ds106radio”), that deviance and the “being bad” aura is not necessarily what is driving the energy around ds106radio—which I imagine Alec was arguing with his tweets above, even if a bit cagily. Follow that up with Stephen Downes‘s response to Giulia’s post that frames ds106radio as not devaint either, but rather as always, already perfectly safe:

As for #protocol, there was definitely a protocol, the thing with ds106 radio wasn’t so much the deviance as it was the community that formed around it. It was like pirate radio, but it wasn’t really, and was always perfectly safe.

And while ds106radio couldn’t be as safe as Elluminate even if it tried, it struck me that whether ds106radio was safe or deviant was really not the point at all. It seemed like the discussion found ds106radio in a paralyzing binary—even though I think both kinda miss the point of the whole thing. Whether ds106 is too radical or too safe doesn’t really matter as much as it provides a way of imagining community through yet another platform—and not a community of one, which obviously would result in no listeners, no connections, and no real value. What ds106radio provides is a model for yet another platform for sharing, creating, and trying to foster conversation. Grant Potter is basically writing the book on what’s possible with this platform right now, it is simply amazing. And what kills me is he is doing it alone while we are talking about safe, deviant, or whatever. There are still a number of technical details to be hammered out. What’s more, there are many others involved that are imagining the cultural details of how we interact, engage, and share in this space. It’s far from perfect, but so far it has been pretty impressive how well people have gotten on, shared, and generally come up with some basics of a protocol that works. Questions that highlight “deviance” or “”safety” seem to forget that this is an experimental platform that other people might consider starting up and playing with on their own—as Downes has—though it’s hard to see the value of a one-man radio station. It could be an awesome way for students in that upcoming MOOC (you know the one that seems a lot like IT Conversations 🙂 ) to have the people taking the class to actually engage, share, and program a whole world of ideas around their course—rather than simply come to hear the expert of the week.

Point is, I really don’t want to engage the copyright issue because I don’t believe the way the US, in particular, is thinking copyright is at all beneficial to an educator trying to help people think critically about their culture—in fact, I think it is a huge impediment. What’s more, the idea of platforms as potential springs of liberation attracts me deeply, and I would rather think of a platform like globally distributed, interactive web radio along the lines of what the Italian radio station from the 1970s Radio Alice (thanks for the link Grant!) was imagining as a direct attack upon the mindless culture of work, money, and fear we find ourselves in. I don’t care about deviance, safety, or copyright—what I want is some alternatives to these predictable and imprisoning classifications. Freedom radio.

This entry was posted in digital storytelling, ds10699, ds106radio and tagged ds106, ds106radio. Bookmark the permalink.

8 Responses to ds106radio is neither radical nor safe, it’s an experiment