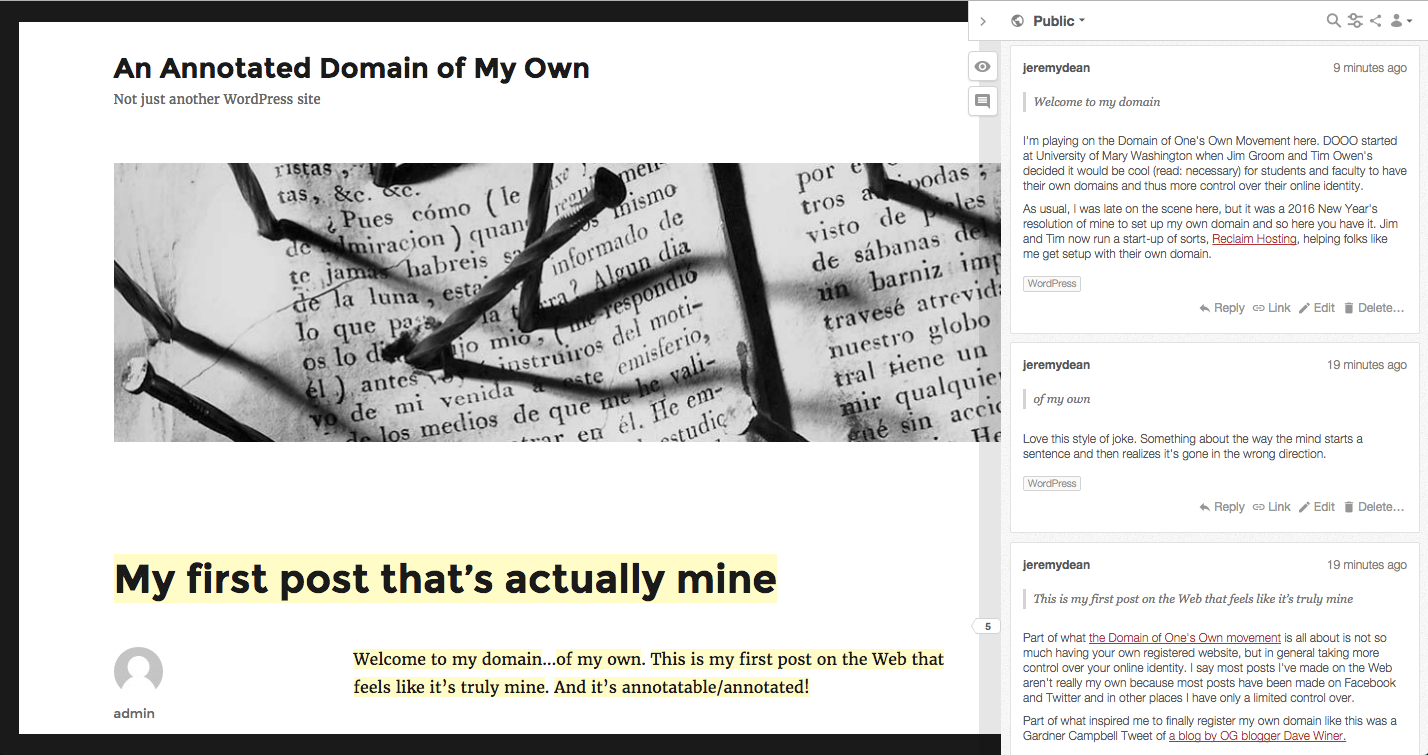 I wanted to point folks to Jeremy Dean’s excellent post “An Annotated Domain of One’s Own” that details getting up and  running with the web annotation tool Hypothesis on a  self-hosted WordPress site. Now I’ll admit it, it didn’t hurt that Jeremy highlighted the awesomeness of Reclaim Hosting in his post, but regardless of that he provides an excellent conceptual framing of why managing your own domain is important as well as hands-on, practical how-to for getting up and running with Hypothesis using WordPress.

Additionally, I have to hand it to the folks at Hypothesis. I’ve been really impressed with the folks that work(ed) there. Last March at the IndieWebCamp in Cambridge I met Benjamin Young, who was in a prolonged conversation with Sir Tim Berners-Lee about some spec I have no idea about. Super smart person, and when we had dinner later that night totally down-to-earth and awesome. Looks like he since moved on to work for W3C, REST Fest, and the Apache Software Foundation, good for him—that some open web stuff right there! Jeremy Dean’s bio frames a long history in higher ed, and I love that he’s out and about blogging his process, tweeting support, and generally getting folks excited about Hypothesis. What’s more, when you’re showcasing projects by faculty like Robin DeRosa and Larry Hanley, it’s a good sign you are building your community from the ground up.

And then they went and hired one of my very favorite people who invented the internet: Jon Udell. It’s no secret Udell’s thinking has provided inspiration for so much of the work we did at UMW over the last decade, and it continues here at Reclaim Hosting. Bringing Udell on as Product Manager certainly reflects brilliantly on Hypothesis. What’s more, I was really excited to see on Twitter the other day that Udell was speaking at BYU. Sending Udell on the road to talk about the open web, decentralization, and higher ed is boon for all of us!

So, if you judge an organization by it’s people, then Hypothesis has been on a bit of a tear as of late.

This entry was posted in reclaim and tagged hypothesis, jon udell, reclaim. Bookmark the permalink.

1 Response to Reclaim Your Hypothesis