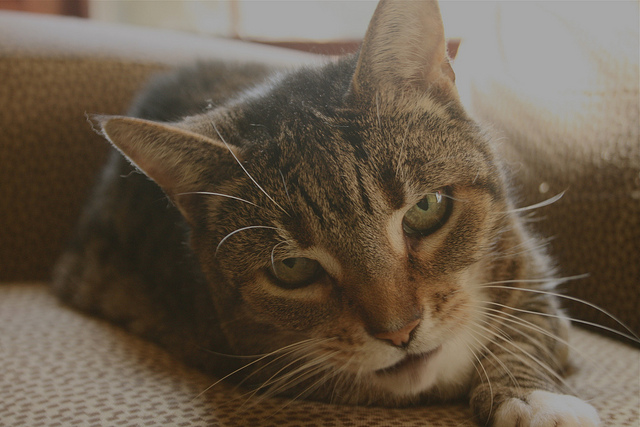 I’m a bit late for yesterday’s Daily Create, but when I saw the assignment was based around the theme of 12 I couldn’t resist. I have a long love affair with the number 12, I was born on the 12th and I also loved Terry Bradshaw growing up. What’s more, it has always seemed like one of the foundational numbers of Western Civilization akin to three or seven: the 12 disciples of Christ, 12 months in a year, the 12 labors of Hercules, etc. Fact is, 12 is not a throwaway number, it has real cultural gravity. So, it makes sense that since my early twenties I wanted to name my first child 12. Not twelve, but 12—it had to be numeric.

But (and some would say thankfully) that never happened, not because I wouldn’t have named my first kid 12, but because before I could fate got in the way. I found a stray cat rolling around on the sidewalk outside my apartment in Brooklyn in the Fall of 1998. I never owned my own pet before, and the neighborhood kids were begging me to give her a home. Beign the sap that I am, I did. What’s more, I named her 12. Not only sparing my first child that cruel fate, but also creating a deep link between man and feline that is still going strong. Twelve never seems to age, I took the above image of her basking in the morning sun on my blogging chair in the den.

I dig 12. She was never a particularly affectionate cat, on the contrary she spent much of the first three or four years of our relationship attacking me. Despite this she has been a loyal companion, and has been a constant in some of the most awesome and painful moments of my life over the last fifteen years. She was there when I was married, when my mom died, when my three kids were born. What’s more, she makes the list when my youngest lists who’s who in our family—12 is not a just number, she’s a free cat! So, when seeing yesterday’s Daily Create I had to take the occasion to capture her presence amongst us. She’s been with me for so long now I’m afraid I’ve started to take her for granted. I don’t want to, because I know I’m gonna miss it when she finally decides to join all the other cats in that great internet in the sky.

This entry was posted in digital storytelling and tagged 12, dailycreate, ds106, tdc630. Bookmark the permalink.