Bring me the Head of Joaquín Murieta 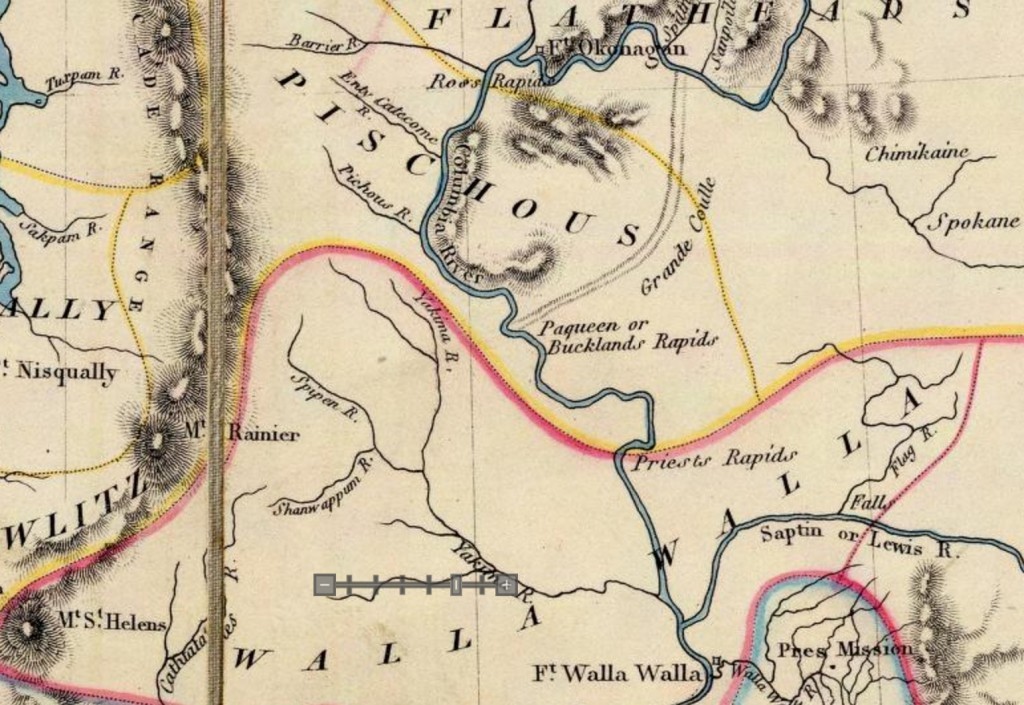 Today’s Daily Create is pretty awesome. It provides an old gold map of the Oregon Territory published in 1844  via the David Rumsey Map Collection, and asks you to pick a spot on the map that would provide the setting of a story. Our job is “to write the opening to a a story that might take place there.” The spot that I immediately gravitated towards was the “Shaste” region. 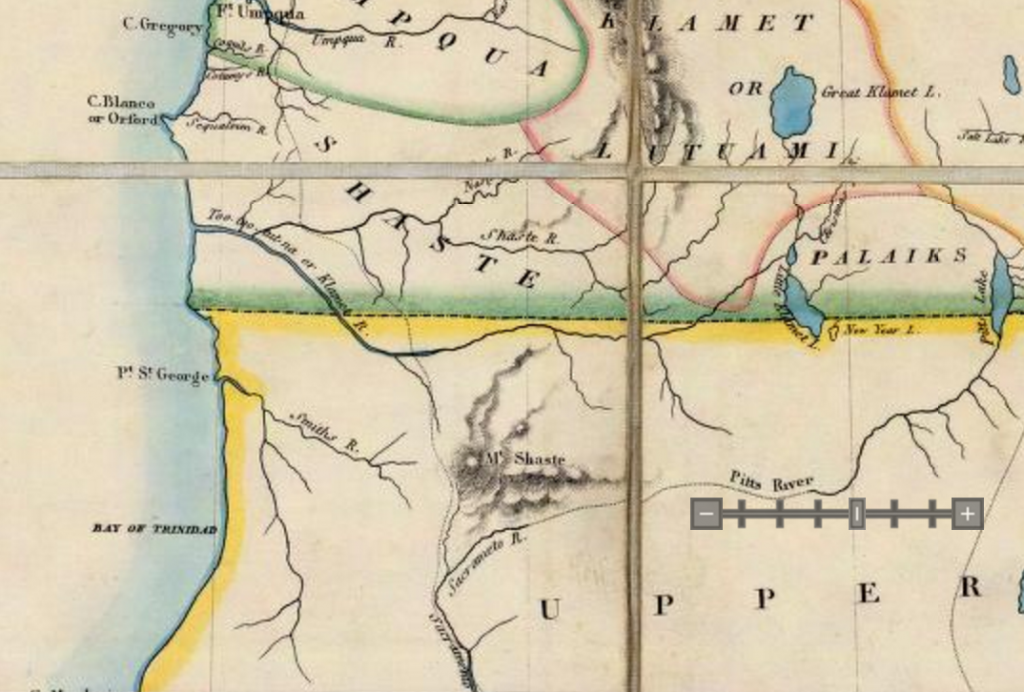 The Shaste region in the Oregon Territory

Or more specifically, Mt. Shaste in Upper California, or what is now know as Mount Shasta in Northern California 🙂 “Why Mt. Shasta?” you ask. Well, my brother lives in Red Bluff, California, not far from Mt Shasta, and I spent a fair amount of time up there in the 90s. It’s a gorgeous spot at the southern tip of the Cascade Mountain range that runs all the way up to British Columbia. What’s more, that “Upper California” region stills has remnants of the California Gold Rush which brought the first Euro-American settlements into the area. And that provides a beautiful segue way for both the time period, setting, conflict and action of my humble Western tale: “Bring me the Head of Joaquín Murieta.” 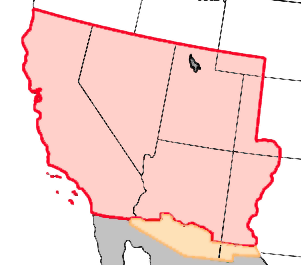 The Mexican Cession, shown in red, and the later Gadsden Purchase, shown in yellow.

But before I write the opening, a little historical context is in order because the other reason I chose Mt. Shasta is because it was one of the settings referred to in a dime novel I read while in grad school by John Rollin Ridge titled The Life and Adventures of Joaquín Murieta (you can find a PDF of the novel here).¹ In fact, this is a novel that has a couple of pretty impressive firsts: first novel written in California and the first novel written by a Native American. The novel frames a pretty interesting moment in U.S. history right after the Mexican American War. This conflict is seldom talked about, and while it only lasted a year and half it resulted in Mexico losing more than half of its national territory, including  Arizona, Utah, Nevada, California, and parts New Mexico, Colorado, and Texas. Talk about a land grab! It’s in many ways the final realization of Manifest Destiny, but one piece of a much longer history that had been written in blood for more than three centuries by that point. I think that might be one reason the Western continues to speak to (or is it haunt?) the U.S. psyche—it can provide a bloody reminder of how we got where we are. What’s more, the Mexican American War opens up broader questions about impulses towards imperialism in the early U.S. that often aren’t suggested until the 20th century.

So, in the late 1840s, early 1850s (just a few years after the map prompting this post was drawn) you have California as a newly annexed territory of the U.S., which means you have an intense, shifting border zone with increased conflicts between the European-American speculators and the existing Mexican and Native American communities (who are increasingly seen as subjects of the U.S.). What better setting than the Gold Rush in Northern California to underscore the violence and greed undergirding this expansion! You can start to see it unfolding, right?

But wait, there’s more. The figure of Joaquin Murrieta (sometimes spelled with one r) is one of legend and lore. Murrieta, once a dignified citizen of Mexico, becomes a legendary bandit after his gold mining claim is violently taken from him. He then takes his revenge on his tormentors. To quote U.S. historian Susan Lee Johnson from Murrieta’s Wikipedia page:

So many tales have grown up around Murrieta that it is hard to disentangle the fabulous from the factual. There seems to be a consensus that Anglos drove him from a rich mining claim, and that, in rapid succession, his wife was raped, his half-brother lynched, and Murrieta himself horse-whipped. He may have worked as a monte dealer for a time; then, according to whichever version one accepts, he became either a horse trader and occasional horse thief, or a bandit 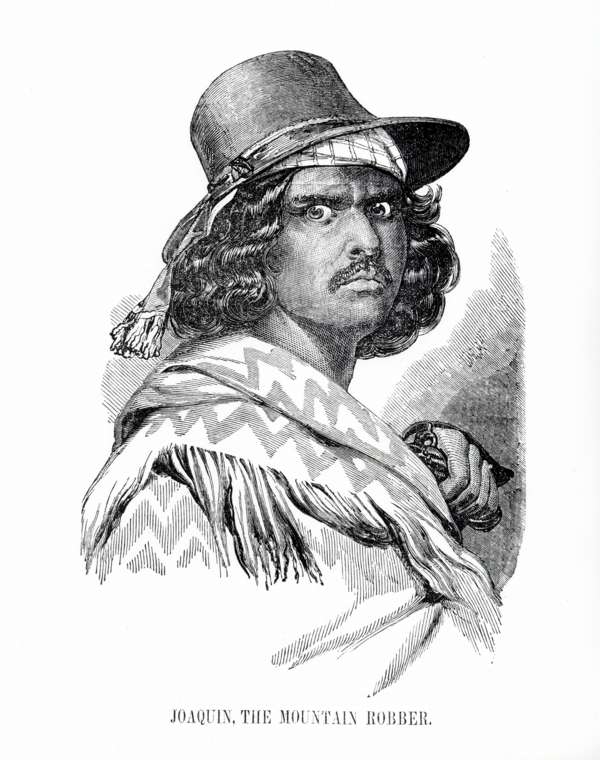 A Portrait of Joaquin Murrieta, “The Mountain Robber”

His wife raped, brother-in-law lynched, and him horse-whipped to within an inch of his life provides an almost textbook example of some of the most horrific violence apparent in a number of contemporary re-tellings of Western tales. And this violence is something Sandy Brown Jensen reacted to in her recent post about the Male Revenge Fantasy specific to this genre of films. And she is right, it’s a story told again and again. After reading Ridge’s novel, I wondered if Clint Eastwood was using it as inspiration for the beginning of one of the most visceral Western revenge fantasies ever:  The Outlaw Josey Wales (1974). A film that starts out with the protagonist watching on helplessly as his wife and son are murdered, the blind revenge for which becomes the driving logic of the entire film. Murrieta’s legend provides a very similar case. He went to Northern California in 1849 to find his fortune in the Gold Rush. He encountered racism from the white prospectors, and when the fins out he has struck gold, the miners turned on him and lynched his brother, raped his wife, and nearly beat him to death. After that, he and a band of fellow Mexicans become outlaws and fight the existing power structure, killing numerous European and Chinese-Americans in retaliation.²

A narrative of male revenge fantasy? Yes. But also an allegory for the land grabbing exploits of the Mexican American War, the racism at the heart of Manifest Destiny, and a broader look at the violence that has made our refusal and outrage at it now even possible. Fact is, to tell a tale like Murrieta’s is to be constantly reminded how integral violence was (and is?) to the formation of the U.S. Take, for example, the fact that in 1853 the California legislature hired 20 Texas Rangers to kill the “Five Joaquins“:

The legislature authorized hiring for three months a company of 20 California Rangers, veterans of the Mexican-American War, to hunt down “Joaquin Botellier, Joaquin Carrillo, Joaquin Muriata [sic], Joaquin Ocomorenia, and Joaquin Valenzuela,” and their banded associates. On May 11, 1853, the governorJohn Bigler signed an act to create the “California State Rangers“, to be led by Captain Harry Love (a former Texas Ranger and Mexican War veteran).

The Five Joaquins could be the subject of a movie in and of itself, add to that the formation of California State Rangers and the manhunt for Murrieta that would, according to legend, ultimately end with his head—preserved in alcohol—being shown for $1 a viewing. It doesn’t get much more violent, and I am just referencing history here.³ The title of this post is inspired by the detail of Murrieta’s head in the Wikipedia article, which makes me wonder if Sam Peckinpah might have been playing on this tradition in another 1974 Western Bring me the Head of Alfredo Garcia (which plays more like a noir than a Western).  And whether or not all the facts in legend around Murrieta are true, I don’t think any of us find the details hard to believe if they were, am I right? 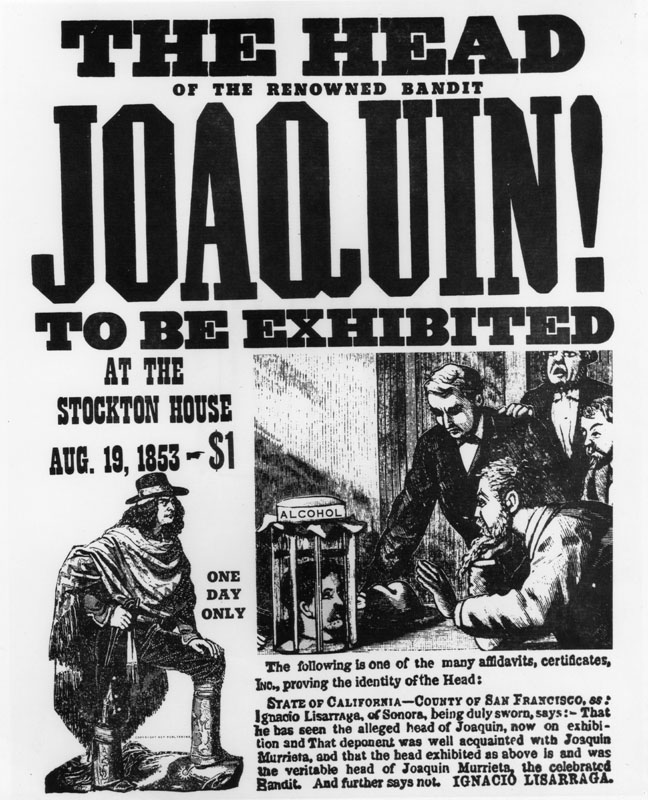 A poster advertising the display of the supposed head of Murrieta in Stockton, CA. 1853

As a follow-up to the tale of Murrieta’s demise, the Rangers received the $1000 reward for bringing back his head, but questions about whether the Rangers murdered an innocent and bribed people to swear out affidavits emerged—who needs an imagination when you have Wikipedia? The whole thing is simply crazy, and its hard not to see the violence as part and parcel of this genre given the history it interrogates.

That said, the narrative implications of Murrieta’s story have seemingly endless possibilities for a a revisionist Western, but it also points to the fact that the violence of our past is so easily forgotten in time. I can’t help but think that’s what Cormac McCarthy’s is talking about in his ultra-violent Western novel Blood Meridian when ruminating about the carnage all around one of his characters in the novel:

All about her the dead lay with their peeled skulls like polyps bluely wet or luminescent melons cooling on some mesa of the moon. In the days to come the frail black rebuses of blood in those sands would crack and break and drift away so that in the circuit of a few suns all trace of the destruction of these people would be erased.

All that said, I digress. All I had to do for today’s daily create was pick a point on a map and write the introduction to a story, so here you go:

The scene opens with a shot of Mt. Shasta and the camera pulls out to show a well-built cabin alongside a running stream. It’s an idyllic scene with lush swaths of green and yellow against a striking blue sky embroidered with the Cascade Mountain range in the distance.

Cut to two attractive Mexican men (brother-in-laws, in fact) knee-deep in a stream panning for gold while laughing and telling stories of their exploits in Sonora before heading to “Upper California” to try their luck in the California Gold Rush. They got a jump on the the rush of ’49 that followed later that year, and were able to stake an impressive claim in an out-of-the-way spot on a tributary of the Sacramento River. They have had no luck yet, but that was all about to change, in more ways than one….

Now I want to write the rest of this film. Thank you Daily Create!

5 Responses to Bring me the Head of Joaquín Murieta