Give the Chronicle Some Love 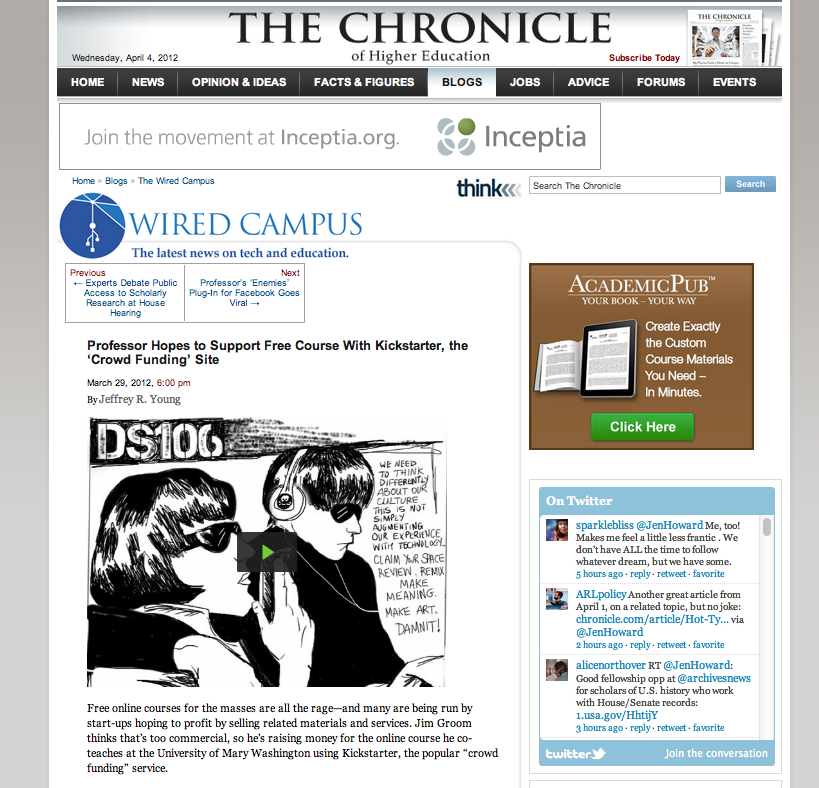 It’s pretty easy to call the Chronicle of Higher Ed on hyperbolic headlines, trumped controversy, and brash over generalizations (all of which I employ here at the bava, mind you), but sometimes you have to acknowledge when they get it right. And while the Chronicle article “Professor Hopes to Support Free Course With Kickstarter, the ‘Crowd Funding’ Site” by Jeff Young undoubtedly serves the ds106 community, I have to also acknowledge that it was on-the-mark. No LMS-baiting, no mention of EDUPUNK, rather just some solid reporting on an emerging model for funding an open, online community like ds106. I mean this gets at the facts pretty well:

Free online courses for the masses are all the rage—and many are being run by start-ups hoping to profit by selling related materials and services. Jim Groom thinks that’s too commercial, so he’s raising money for the online course he co-teaches at the University of Mary Washington using Kickstarter, the popular “crowd funding” service.

Now one of the things I had to make clear to UMW was that raising funds for the server to run  the ds106 site is not directly related to raising funds for the UMW course. Let’s be clear here, President’s are in the business of raising funds for universities, not instructional technologists 😉 I get paid by UMW to teach the course, but the ds106.us site provides an aggregation hub for seven universities that we know use this space, and there may be more. There’s also a large number of open, online students who aren’t associated with any specific course and are using the site throughout the semester to varying degrees. So we thought the idea of the community supporting the costs for the server made total sense given ds106 shouldn’t be conflated within any one institution. What’s more, we figured one potential measure of the vitality of the community might be how willing everyone was to support it going forward, and in that regard the people have spoken. So, thanks to Jeff Young at the Chronicle for running the story and nailing the details, and a huge thanks to UMW for understanding what we are doing here and everyone involved in the ds106 community that made this whole thing so awesome, you all rock!.

This entry was posted in digital storytelling and tagged ds106, Jeff Young, kickstarter, The Chronicle, umw. Bookmark the permalink.

2 Responses to Give the Chronicle Some Love