I Can Read Alien 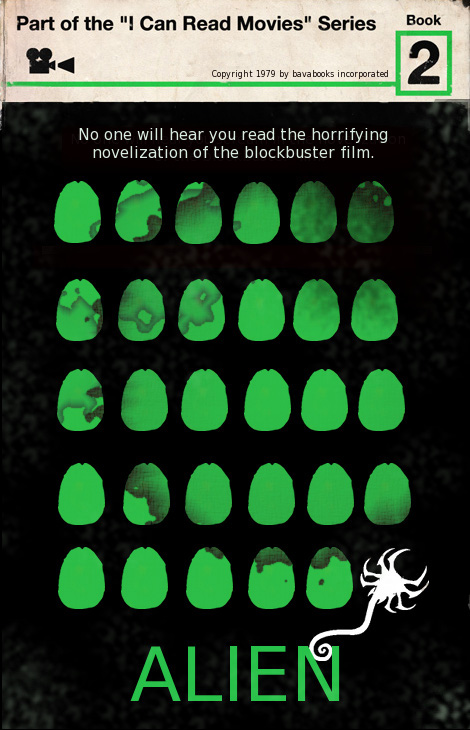 One of the assignments I have been dying to do for over a year, but have never been brave enough to try is the I Can Read Movies design assignment. My first attempt at this assignment is rather derivative, I stole the design idea from Spacesick, the orginator of this awesome series. I took the basic design for his Gremlins book cover, and applied it to one of my all-time favorite films Alien (1979).

So basically I imagined a series of rows of alien incubator pods that end in a fullblown face hugging alien. What’s always been interesting to me is that in the original movie poster the alien pod serves as the dominant image. It is a rather minimalistic poster in its own right, and the fact that the pod in all subsequent sequels is relegated to insignificance, when for me it was one of the most powerful images of the first, and best, film is interesting. I understand the original movie poster didn’t want to give the alien’s form away, a form that would thereafter become iconic. But as much as James Cameron tried in Aliens, the feel and aesthetic of the first half an hour of the first film has never been reproduced convincingly. It’s as masterful as set design has ever gotten.

Anyway, this book cover is certainly not that masterful either but it does pay homage to the pod garden, what’s more it gives the facehugger some love. I also built in at least one easter egg wherein the film’s original tagline “In space, no one can hear you scream” is re-worked for the novel. I also made it a bavabooks production with the same year the film was released. Simple, I know, but this is my first go around with actually trying to do much more than map some text on an image, so gimme a break.

I am gonna do a fullblown tutorial for my work on this, but I have to give a shout-out to MOME, his tutroial on using brushes allowed me to begin adding some texture and making this look a bit more convincing. It was cool to learn a bit more about textures, and I am getting more and more familiar with GIMP, which is nice.

1 Response to I Can Read Alien