If we don’t, remember me 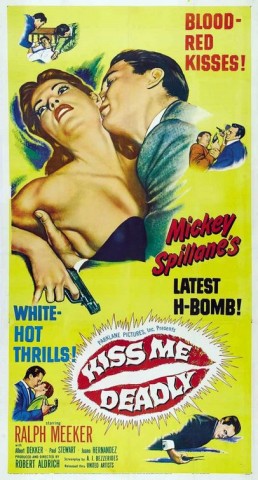 I was watching the noir cult classic Kiss Me Deadly for the first time in many years last night. It’s an amazing film, and I highly recommend it to anyone who hasn’t seen it. And when you consider both Kiss Me Deadly and Night of the Hunter were made the same year, one would have to assume 1955 would remain the most important year for hardcore film violence until 1967-68 when Bonnie & Clyde and The Wild Bunch are released. Kiss Me Deadly is deeply disturbing on many levels, but unlike Bonnie and Clyde and The Wild Bunch little of it happens on screen, it’s all offscreen but communicated psychically with kicking feet, ear piercing screams, and deeply disturbing instruments of torture. Kiss Me Deadly is a textbook example of how to haunt and horrify the audience by creating a simple image that forces viewers to interpolate the horror.

But I told you all that, just to tell you this. While watching the first 10 minutes of Kiss Me Deadly (one of the greatest intros of any film ever) I realized that the title for the blog that transformed the way I imagined animated GIFs, If we don’t, remember me, was from the intro to Kiss Me Deadly. You can see it at 8:25 of this clip on YouTube. I can’t say I was totally surprised since the proprietor of the IWDRM blog obviously knows and loves film, but I was struck when I went back to the IWDRM archives to find there isn’t one animated GIF from Kiss Me Deadly, so the following GIF is my meager homage to both the great Kiss Me Deadly as well as the proprietor of IWDRM, whose art has inspired me to have fun not only thinking about, but in some real way interacting with, all those scenes that have so deeply affected me over the course of my movie watching life.

And this next GIF is not so much an homage as it is a capturing of what has gotta be one of the earliest telephone message machines in cinema. When I first saw this Kiss Me Deadly in L.A. during the early 1990s I was dumbstruck by the presence of a telephone answering machine in the 1950s, how could it be? Turns out the first commercially available answering machine was available in 1949—how crazy is that? Some one should do a animated GIF homage to all answering machine in film 🙂

This entry was posted in digital storytelling and tagged animated gifs, ds106, Kiss Me Deadly, Night of the Hunter. Bookmark the permalink.

1 Response to If we don’t, remember me