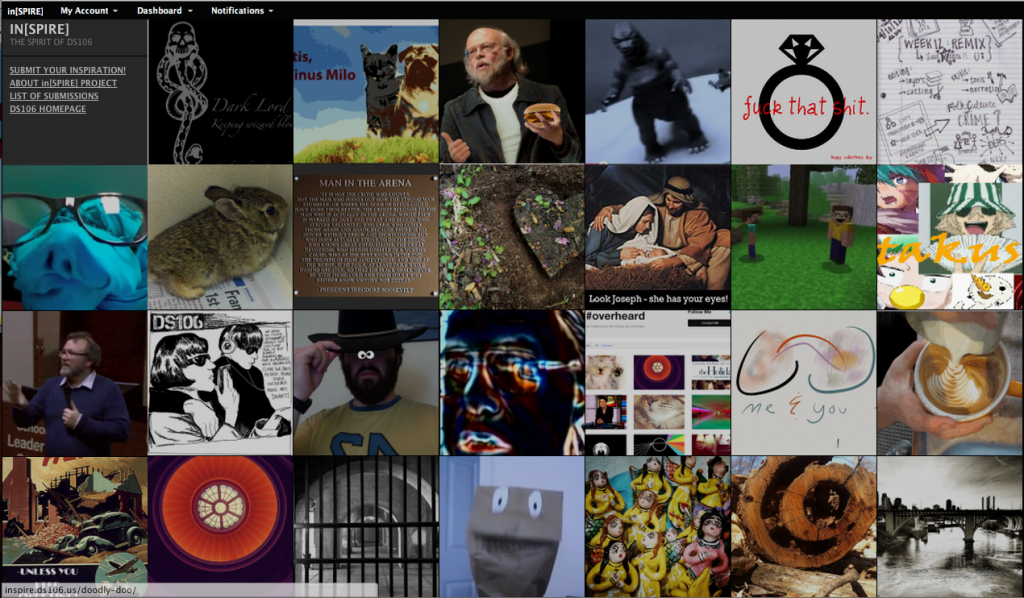 Maybe one of the coolest things about ds106 is the framweork is loose enough that students can not only dream up how to make the community better, but can almost immediately implement it in some pretty powerful ways while the class is running. It reminds me of the idea of building the plane as it’s flying, and UMW ds106 students Linda McKenna and Rachel McGuirk did just that brilliantly by conceptualizing and executing in[SPIRE], which is a testament to the kind of thinking at the heart of ds106: if you can imagine it, it is no dream!

What is in[SPIRE]? Well it’s a site that let’s anyone feature work from around ds106 that has inspired them. But Linda and Rachel say it better in the about page:

A key part of the ds106 community is the connections between all of the pioneers. We have knitted together an intimate community that is not only participating in its structure but also creating it. The in[SPIRE] project wants to build a narrative of these connections in an ever-growing diagram. Be a part of the project and submit works that have inspired you and watch the diagram grow!

I’m not sure the term “diagram” fully captures what they’re doing here, they’ve built a mechanism for visualizing, promoting, and archiving the best work from around the ds106 community. What’s more, you can feature work from any of the previous semesters. How cool is that? Linda and Rachel imagined and implemented a piece of the ds106 technical infrastructure that will benefit everyone and move forward with the course—so rad. What I also like about it is that it opens up the possibilities for acknowledging inspiration and featuring good work without making the instructor the single locus of power in this regard—a concern that Stephen Downes has raised again and again and one I remain mindful of.

Linda has written about the process and planning for the site here, here and here. What’s more, they sat down with Alan and myself a few times, and the site finally took on life when the genius and magician Martha Burtis showed us all the intricacies of Gravity Forms, WordPress Views, Custom Types, and some custom template kungfu (which is the recipe we hope Martha writes up soon 🙂 ). And let me tell you, Martha is enfuego right now, and for every time someone has said to me “That can’t be done in WordPress!” all I can do is smile and think about all the amazing things Martha is doing with WordPress right now, she is killing it.

I am going to be requiring all the students in my section to in[SPIRE] at least four works from this semester, which will prove easy given how much awesome stuff has been created, and I’m also hoping ds106 alum from previous semesters will swoop in and feature stuff. It think it would not only be cool for preserving the work and building a more centralized archive for ds106, but Linda and Rachel built in a mechanism so that you can sort not only by media type but also semester going forward. So amaizng, so don;t stand there go in[SPIRE] something!

This entry was posted in digital storytelling and tagged ds106, in[SPIRE]. Bookmark the permalink.