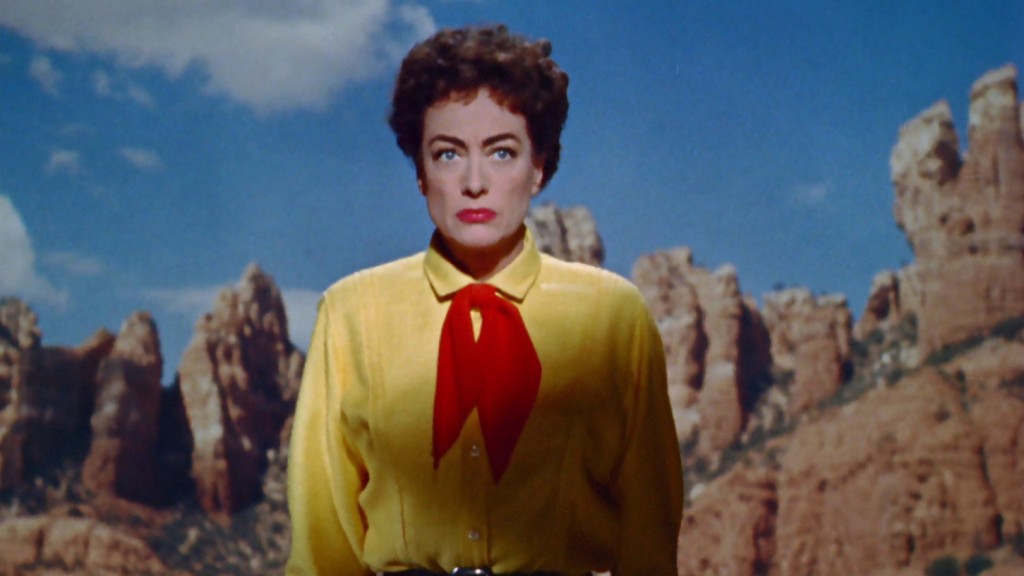 After seeing today’s Daily Create priming folks to do some research for the coming Western-themed ds106, I got the urge to write about a particular Western (although not a Spaghetti Western) that rules: Nicholas Ray’s 1954 Western dream vision Johnny Guitar. It has got to be one of the most unique Westerns ever made. Joan Crawford is, per usual, a complete bad ass, and I have always had a soft spot for Sterling Hayden. According to the Criterion extras on The Killing, Hayden notes that he and Crawford fought like cats and dogs during the making of the film. Some of that dynamic comes across in the brilliant “lie to me” scene below:

Johnny Guitar centers around Vienna’s (Joan Crawford) refusal to cow to the threats of her community, which can be seen as subtext alluding to Joe McCarthy’s political witch-hunt during the early 1950s. This is nowhere more apparent than in the brilliant piano scene in which Vienna refuses to turn over her friends.

This moment puts it alongside Fred Zinneman’s High Noon (1952), which provides a critique of those in Hollywood who did not stand-up to the House of Un-American Activities Committee.* But unlike High Noon, which features Gary Cooper as the hero, Johnny Guitar foregrounds Crawford as the strong, aggressive, nonconformist who challenges the status quo. One of the few staunchly feminist Westerns of the era.

Add to that the fact that it’s so beautifully shot in colors drenched in celluloid technicolor, and you have a nearly perfect movie. In his book The Films in My Life, François Truffaut described it as the “Beauty and the Beast of Westerns, a Western dream.”  Truffaut was struck by Ray’s use of bold colors, poetic dialogue, and cowboys vanishing and dying “with the grace of ballerinas.”

So, if you are getting ready for #western106 and want a film working on many levels, Johnny Guitar will not disappoint. Not only is it a gorgeous film, but it also demonstrates the amazing range the Western genre has for commenting and critiquing the cultural values embedded in the historical moment a given film was made. While Westerns share a lot of similarities, the joy of the genre is exploring the differences within the genre over the history of film. Hell, it’s the beauty of art all told.

*On the other hand, Western film giant John Wayne called High Noon “the most un-American thing I’ve ever seen in my whole life”.[1]