A couple of weeks ago Paul Bond reached out asking if I wanted to discuss Jack London’s 1908 dystopian novel The Iron Heel. I had recently read White Fang with my kids, so I was definitely game. I had heard the novel described as a kind of pedantic socialist manifesto thinly masked as a romance, and it pretty much lives up to that description. Paul already did a good job of discussing the limits of the novel, so I’ll pull a London from chapters 3 and 7 of The Iron Heel and basically lift and copy what he wrote here 🙂

Which brings up the question: Is it a good book? It feels like an odd question to ask, since we both invested time in reading it, thinking about it, and discussing it. It makes for interesting discussion, as a product of its time, as a vision (sometimes eerily accurate) of the near future, and for how it is relevant to today’s world. It is also tedious, sometimes pedantic, often unreflective, and lacking in nuance or subtlety. I wondered if London might be making a comment on the vacuousness of the newly-minted True Believer, but apparently he was one himself. As Jim pointed out, the most compelling parts of the story, the Red Virgin and the terrorist organizations, are only mentioned in passing, when they could be worth a novel in themselves.

In fact, the novel’s most interesting character is Anna Roylston, or “The Red Virgin,” but she is only mentioned in passing a few times. I would have loved an entire novel about her life. She is basically an assassin for the Socialists that targets the oligarchs and their henchmen, here is a bit about her:

Despite continual and almost inconceivable hazards, Anna Roylston lived to the royal age of ninety-one. As the Pococks defied the executioners of the Fighting Groups, so she defied the executioners of the Iron Heel. She bore a charmed life and prospered amid dangers and alarms. She herself was an executioner for the Fighting Groups, and, known as the Red Virgin, she became one of the inspired figures of the Revolution. When she was an old woman of sixty-nine she shot “Bloody” Halcliffe down in the midst of his armed escort and got away unscathed. In the end she died peaceably of old age in a secret refuge of the revolutionists in the Ozark mountains.

And she is mentioned about 3 or 4 other times. Rather than listening to Ernest Everhard (how about that name?!) go on and on about socialism at dinner party after dinner party, or lecture after lecture, I would much rather follow a character like Anna Roylston through the corridors of the Socialist underground. In fact, here character made me think about the character and plot-line of Wolfenstein II: The New Colossus. In fact, the 15-20 pages of description in Chapter XXIV when the Socialist uprising actually happens (known as The Chicago Commune) may be the best part of the book. The intense description of the abysmal horde rising from the beneath the city like the Mole people in Escape from New York was intense. Paul captured a great audio clip of that moment:

And the ways in which the people of the abyss were brutally mowed down by the mercenary army funded by the plutocracy was the moment the book lives up to its classification as dystopian. But again, it was the passing details that I found most interesting. For example, in the final chapter in the wake of the total failure of the socialist uprising in Chicago, various terrorists organizations emerge in response. The description of these groups seems like something out of The Warriors:

The annals of this short-lived era of despair make bloody reading. Revenge was the ruling motive, and the members of the terroristic organizations were careless of their own lives and hopeless about the future. The Danites, taking their name from the avenging angels of the Mormon mythology, sprang up in the mountains of the Great West and spread over the Pacific Coast from Panama to Alaska. The Valkyries were women. They were the most terrible of all. No woman was eligible for membership who had not lost near relatives at the hands of the Oligarchy. They were guilty of torturing their prisoners to death. Another famous organization of women was The Widows of War. A companion organization to the Valkyries was the Berserkers. These men placed no value whatever upon their own lives, and it was they who totally destroyed the great Mercenary city of Bellona along with its population of over a hundred thousand souls. The Bedlamites and the Helldamites were twin slave organizations, while a new religious sect that did not flourish long was called The Wrath of God. Among others, to show the whimsicality of their deadly seriousness, may be mentioned the following: The Bleeding Hearts, Sons of the Morning, the Morning Stars, The Flamingoes, The Triple Triangles, The Three Bars, The Rubonics, The Vindicators, The Comanches, and the Erebusites.

This whole bit on the terrorist organizations seems far more relevant today than anything resembling an international Socialist movement—which may be a good sign the plutocrats are winning. This text is a footnote in the novel that is delivered from 700 years in the future. And for me these messages from the future were often the most compelling parts. The novel is a framed narrative in which we are reading the manuscript of Avis Everhard which was discovered 700 years after she had written it, so basically the 26th century. The footnotes pepper the texts, and makes for a dialogue between realities that are framed inline as footnotes. It was off-putting at first, but I came to appreciate how London was experimenting with this back and forth in an attempt to denature the reader from their present reality, not to mention couching political and personal jabs as post facto realities. That said, I would rather  read a novel about the Valkeries or the Widows of War and their counterparts the Beserkers—complex human stories based on the tragedy of living beneath the Iron Heel—the book delivers very little of that in the end. 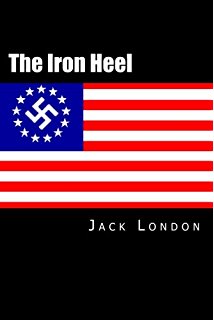 One more thing worth noting about the text I used. Given I’m still attached to paper, I ordered my version through Amazon and I have to say I got a pretty bad edition. The cover is pictured to the right, and as you can see it’s graphics are playing on the current political atmosphere which I stupidly fell for. When I got the book there was no mention of an editor or anyone behind the edition, and what’s more I noticed immediately the spacing was kinda crazy. Worse, some of those footnotes from the future were missing. I confirmed this when I compared the final chapter to the version of the novel on Gutenberg,  my version completely left out the final footnote telling the reader the novel ends abruptly:

*This is the end of the Everhard Manuscript. It breaks off abruptly in the middle of a sentence. She must have received warning of the coming of the Mercenaries, for she had time safely to hide the Manuscript before she fled or was captured. It is to be regretted that she did not live to complete her narrative, for then, undoubtedly, would have been cleared away the mystery that has shrouded for seven centuries the execution of Ernest Everhard.

Kind of a major omission in my mind. Given the novel is in the public domain anyone can make a copy, and I admittedly bought this one for the cover, not the edition. I regret it. I would recommend against this edition given it is pretty much a hackjob to make a quick buck—and what a book to do that with! 🙂