Well, if nothing else it should be clear by this point that Tim Owens and I do not play around—we are all business! Case in point, two years ago in this article in the Free Lance-Star we noted that at some point soon CoWork could have a VHS store that is remotely run by an international robot (a particularly attractive one at that). And now, it is my pleasure to introduce Reclaim the Robot! 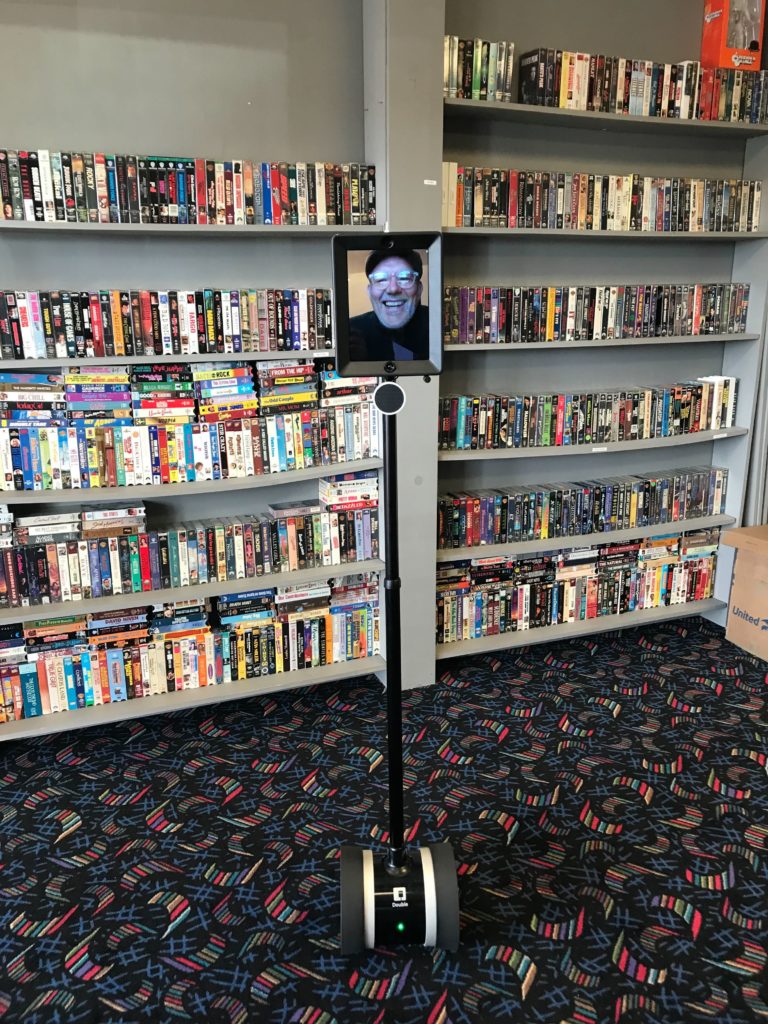 Can you dig it?! I knew that you could. Shabam! 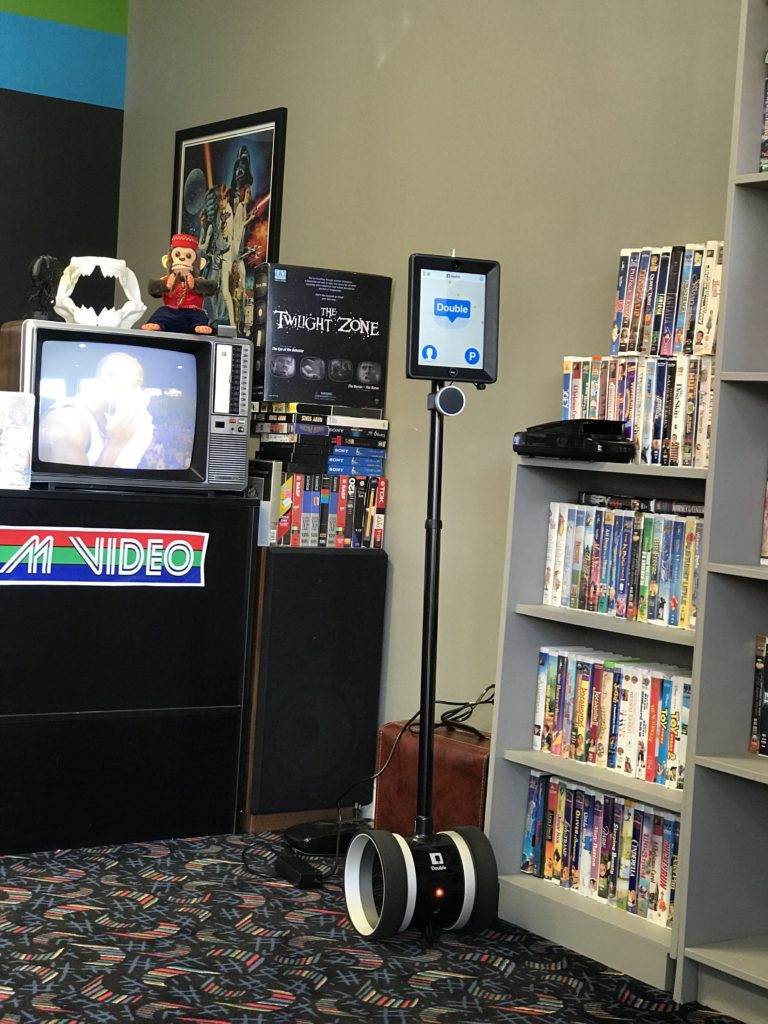 We’ve been dreaming of this madness for a while now, and Tim finally found someone who had a bit of buyer’s remorse online and we got it for a bit of a steal. It’s from Double Robotics, and it is marketed as the telepresence  robot that allows commuters to feel more connected. And given Martin Weller’s recent post about support (and Scooby-Doo!), and Downes’ connecting that to the importance of a sense of presence (which I totally agree with) I figured the higher ed community might look to the practices of the cutting edge VHS market for some ideas 🙂

What is it like? It’s trippy. You can control the robot from the browser, and adjust the height of the “head” which is an iPad mounted on a modded segueway. When you lower the “head” the robot can move pretty quickly, and you have more control to get around. One you are ready to stay put, you can park the robot and share links, pictures, videos, etc. What’s more, you can share your view with others remotely which effectively lets you take them on a tour of the space (any takers for a Reclaim Video/CoWork/Reclaim Arcade tour?). Tim was taking me on a tour of his work with Smash TV at CoWork while he was on his couch at home and I was thousands of Miles away. That’s wild. 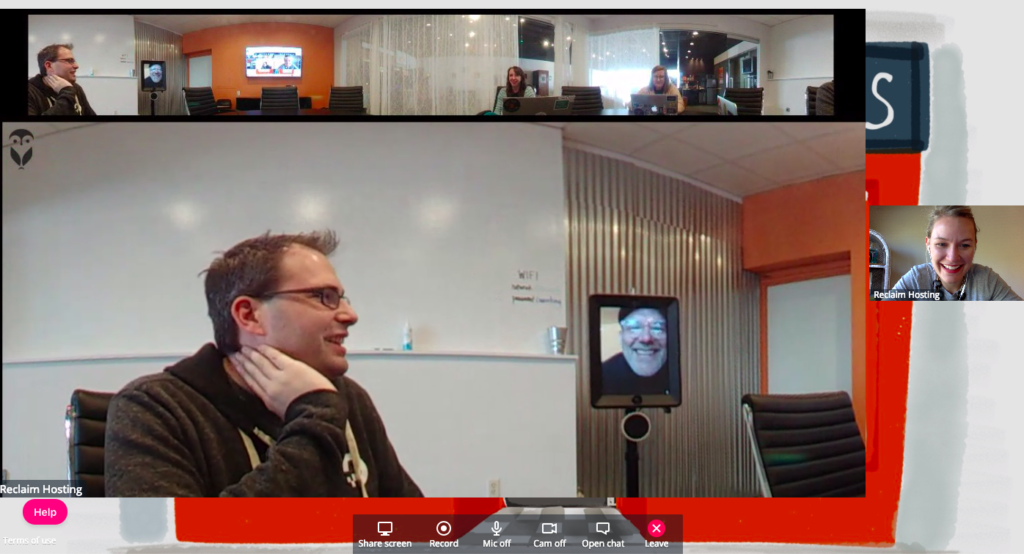 We kind of surprised the rest of our colleagues by calling an emergency meeting, and then I rolled into the room—with folks expecting I would show up alongside Lauren via video chat. The reaction was interesting because I think it was a bit uncanny for everyone. One immediate thing I noticed is that it’s hard to negotiate depth so personal space can get weird, but you do truly feel like you are in the room and at the table. 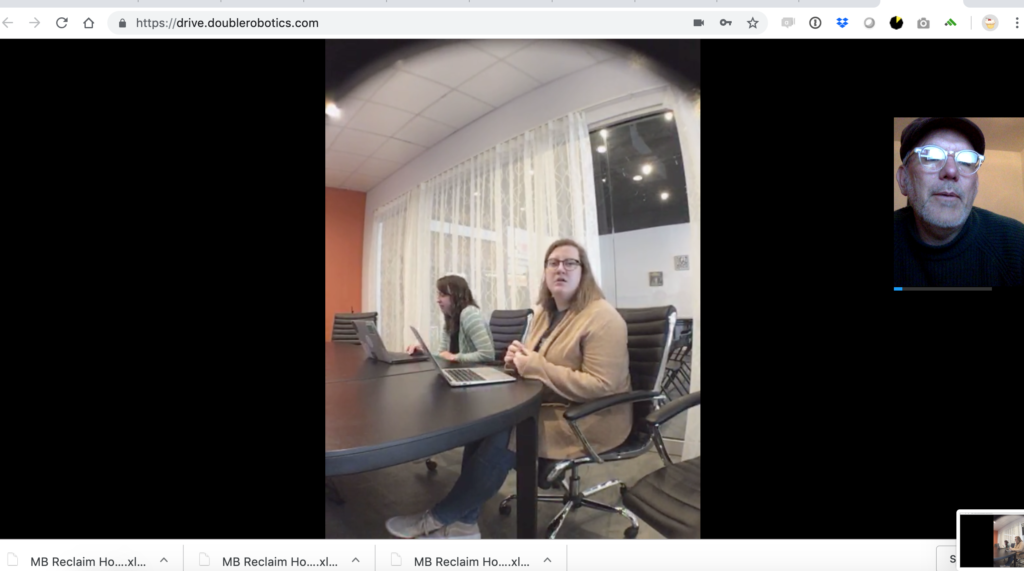 You can get a sense of how I see the others, and this image is awesome because it really is like Meredith is talk to me. The point of view is kinda like living in a virtual slasher film—although I probably need a better analogy 🙂

As you can tell by Tim and Lauren’s reaction in the above picture, it is both fun and bizarre. The sense of presence is definitely real, but also somehow unique and hampered. I can move around the space and talk with folks, but I still need help turning things on, plugging the charger in, turning on the video games, loading the tapes, etc. Also, I think folks feel weird talking to me as a robot, and I can understand that. I do wonder what the reaction will be when I greet my first Reclaim Video patron as a robot 🙂 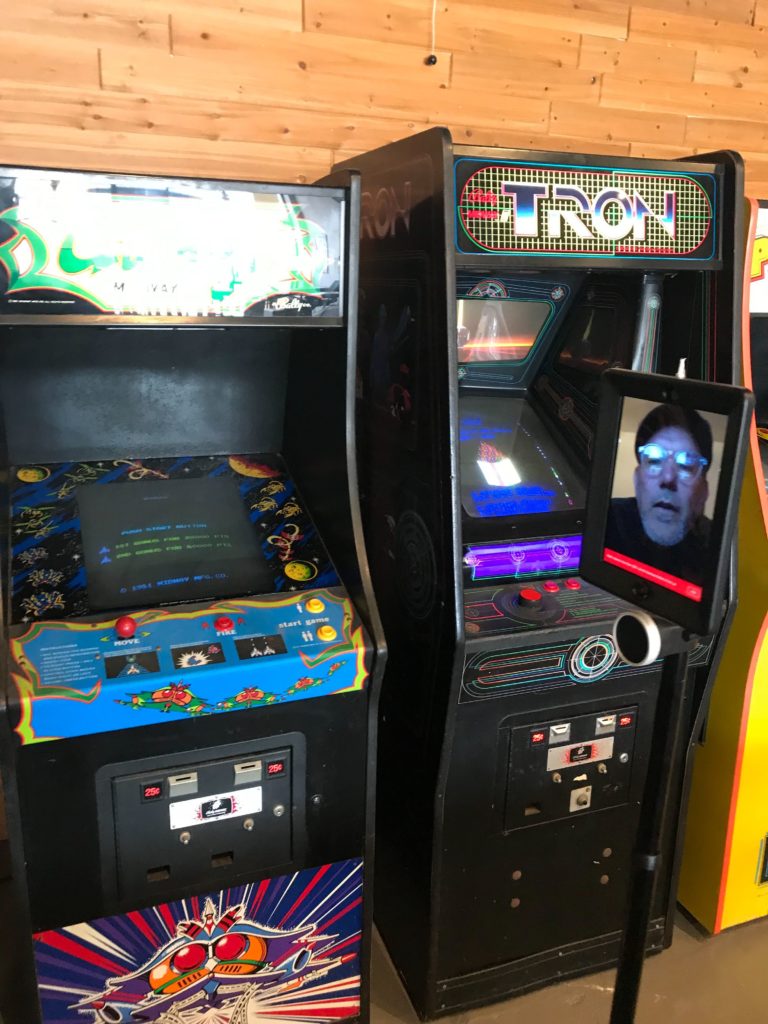 The other thing that was cool for me was showing Tommaso around Reclaim Arcade. He has been talking to me non-stop about the games we got and what they are like, so I could finally take him on a tour and talk through the games a bit. I hope to do much more of this! 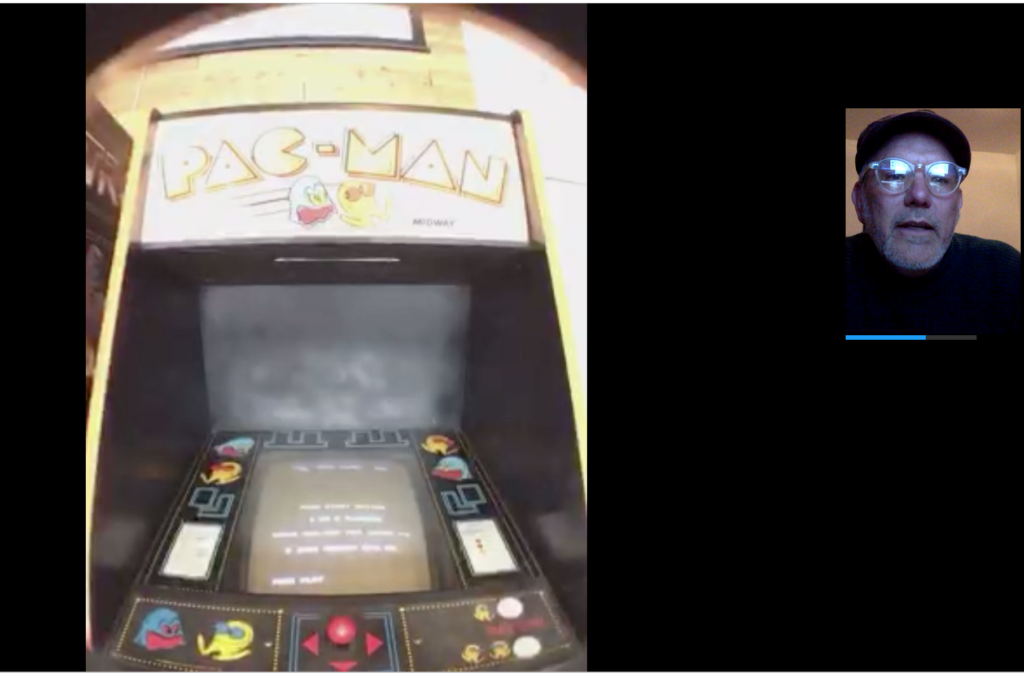 It was also cool because Tommy got into drive the robot, and he even parallel parked it once we were done. There is a camera that looks at the floor that is quite useful, and I have to say when Tim was driving he maneuvered between an old laserdisc player and chair that had no more than 18″ between them without issue. It is quite responsive, and the handling is impressive. Well, I have more to say, but my early morning shift at Reclaim Video is fast approaching, so I need to get over there and meet and greet the future! Robot Rock!

This entry was posted in reclaim, Reclaim Video, ReclaimVideo and tagged Reclaim the Robot. Bookmark the permalink.

9 Responses to Reclaim the Robot