This morning Tim gave me a tour of all the work he has been doing to automate Reclaim Video over the last week or so—it is pretty impressive. The first 15 minutes of the  discussion is of my face given the live broadcast was locked on me for a bit, but that gets resolved and you can hear us go through the various pieces that will essentially allow anyone to effectively run Reclaim Video remotely using Reclaim the Robot. The video is about 45 minutes long, and I am a realist so it might make sense to highlight some of the advances:

Shot from the Nest camera

Plex also allows you to synch videos playing in Reclaim Video with your home TV, which is crazy, and you can also use Plex on your phone to control what’s playing, so there is a lot of exploration still to come there. One thing Tim noted we need to explore is how to adjust volume on the 80s Fisher stereo, it was low when him and Tim Clarke were watching The Fly (1986), and it was impossible to adjust. The other issue to figure out is how we stream the audio online cleanly via something like ds106radio so that we can synchronously listen  while watching video through the Nest camera using something like Twitter or some other space to discuss on films playing in Reclaim Video. 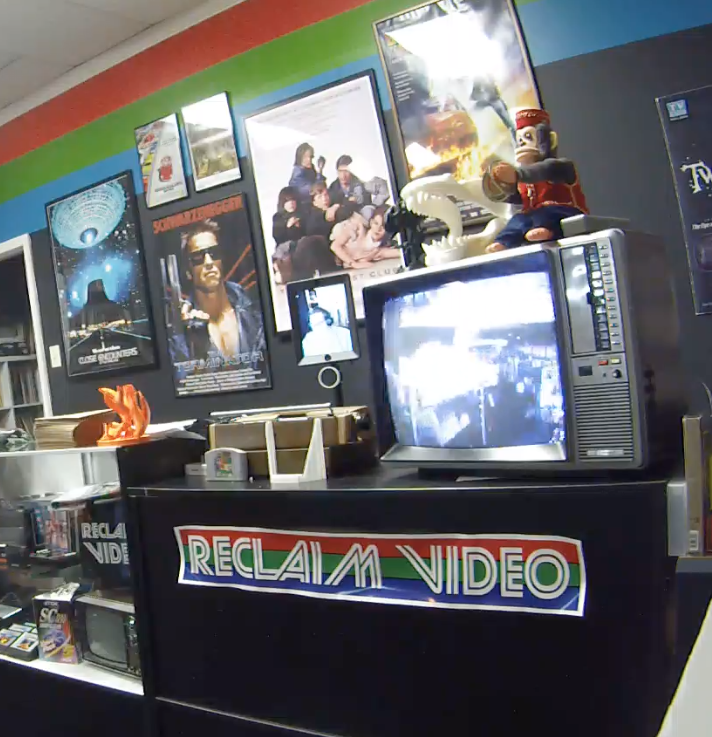 Tim working the counter at Reclaim Video as Reclaim the Robot

So, that is a quick list, and we are all for ideas, I am really excited about the potential of this space for playing, and as we noted in the video, it’s like we finally got our incubator classroom at Reclaim Hosting 🙂

This entry was posted in Reclaim Video and tagged plex, ReclaimVideo, robot. Bookmark the permalink.

2 Responses to Reclaim Video: Incubating the Future of VHS