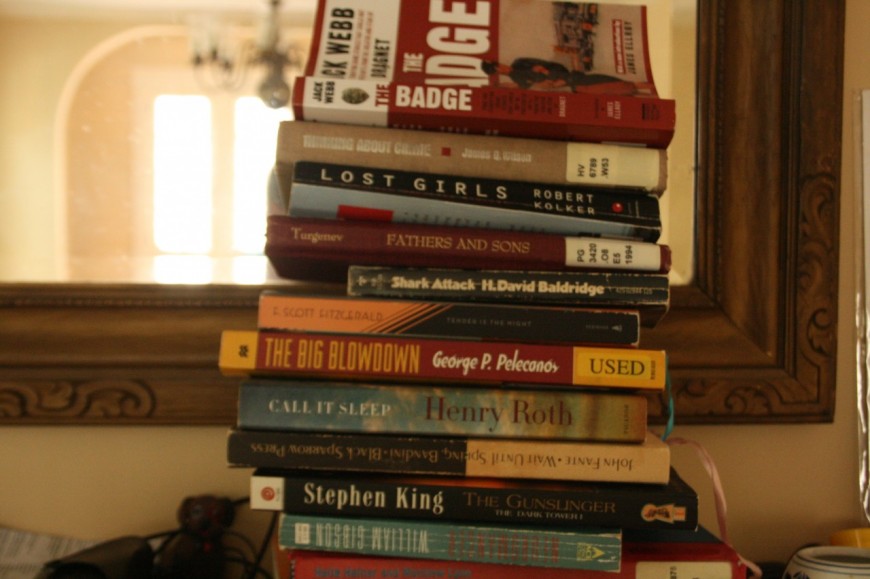 We’re almost a week into the Summer of 2014, and I’ve already polished off two books: Lost Girls (not the graphic novel) and The Badge. Now I recognize this reading spree got off to such a strong start because I’ve been at the beach for almost two weeks. But it has inspired me to try and come up with a reading list for the next month. Pictured above is my summer reading list through July. If I finish these books I’ll post another one for August, but don’t hold your breath 😉

As I already mentioned I read Jack Webb’s The Badge: True and Terrifying Crime Stories That Could Not Be Presented on TV, from the Creator and Star of Dragnet and this one was a real treat. I’ve been want to reading this since Paul Bond and I taught the True Crime class in the fall. And if we teach that class again, this book will be part of the syllabus. One could make the argument (coming in a future post) that this book is as important, if not more, than Truman Capote’s In Cold Blood for the True Crime genre.

James Q. Wlison’s Thinking About Crime is a book I want to read as I get ready to watch the HBO series The Wire again. This amazing comment from Mike Caulfiled a while back introduced me to the broken window theory of crime, and it got me intrigued. I am returning to the book by Wilson that introduces the theory in the 1970s as a way to think about theoretical and narrative elements of The Wire for the fall instantiation of ds106, which will be based on the TV series. What’s more, it is probably another book I’ll use for True Crime if we teach it again.

I’ve already read and blogged about Lost Girls. It’s another candidate for the True Crime class, and I am personally taken with it because it focuses on the story of a serial killer that operates on the south shore of Long Island, which is where I grew up.  I’m so intimately familiar with the places being discussed in the book that it adds an extra layer of creepy to the whole thing. What’s more, it has a whole angle on the role of the web in disrupting prostitution which gives this book a particularly 21st century spin on the nature of violent crime in a moment dominated by new media.

Fathers and Sons by Ivan Turgenev is a 19th century Russian classic I’ve been dying to read for two decades but never made the time. It’s relatively short, and I am half way into this one. It’s awesome, anarchists are all the rage, and it’s far more complicated than that because it’s a 19th century Russian novel. I’m really enjoying the strained relationship between the struggling aristocratic father and his loving, anarchic son. It’s the meat of the book, and through such a simple premise so much can be learned about not only a cultural moment in Russia, but life in general. There will be a bava post on this one that makes up for my inanities here.

Shark Attack by H. David Baldridge is one of the earlier books to capitalize on the exploitation of sharks that was Jaws. That said, Baldridge built the International Shark Attack File and this book narrates that process and digs deep into the data, and the gorey details, of shark attacks. This is a re-read for me, and it’s on the list because I still want to propose a freshman seminar on sharks sometime in the near future.

F. Scott Fitzgerald’s Tender is the Night is a novel Anto and I started reading while on vacation in Maine last Summer, but we never finished it. I want to return to the stories of Americans on the French Riviera living the life, and then watching it detoriate before their very eyes—and mine. How can you follow-up on The Great Gatsby? This is Fitzgerald’s attempt.

George Pelecanos’s The Big Blowdown was on the syllabus for the Hardboiled fiction class Paul Bond and I taught in the fall of 2012. It was bumped from the syllabus given we read so many books, that said I want to actually read it now because I put it on the syllabus blindly 🙂 Luckily, Paul Bond is better than me.

Henry Roth’s Call it Sleep, like Turgenev’s Fathers and Sons, is a book I’ve been wanting to read for a very long time. Antonella raves about it, and given my roots in New York and my time spent in Brooklyn I know it will hit home. I just have to sit down and finally read it, and I’m looking forward to just that over the next few weeks.

John Fante’s Wait Until Spring, Bandini (the book doesn’t even have its own Wikipedia page) is on the list for my trip to Los Angeles in July. No writer reminds me of the dark and the light that is LA, and I’ve written again and again how Fante should be counted amongst the LA hardboiled existentialist writers, even though his relationship to crime is cursory. Ask the Dust was on the Hardboiled syllabus, but now it’s time to dig into this novel which I have neglected for too long.

Stephen King’s The Gunslinger on the lsit because Martha and Ryan have been talking a lot about this series, and I read it so long ago that I don’t remember any of it. So, this one is an ode to memory lost. It’s kind of hard to think you spent hurs pouring over and deeply enjoying a book just to forget it. The mind is cruel.

Finally, William Gibson’s Neuromancer is a re-read that I’m doing becuase I want to add it to The Internet Course as a required text, along with Bruce Sterling’s Islands in the Net. I figure the scifi space of cyberpunk during the 1980s holds a fascainting space for a time that is still trying to imagine the future of the internet. I’ll probably bring in Stewart Brand’s Whole Earth Catalog as well.

That’s roughly nine books (subtracting the two I read) in about five weeks. Two a week would be a really good pace for me. As with anything, reading gets easier the more you do it. I think it’s time to commit to a little mind exercise to draw some connections and imagining beyond what I have to take care of next on my todo list. What’s more, I’m inspired by Chris Lott’s recent Katexic Clippings project which emails you a passage from a literary work, a word of the day, and some of the things that have him fascinated on the web. The email/newsletter approach makes it more personal and private, and I’m interested in that turn.

This entry was posted in reading and tagged summerreading. Bookmark the permalink.