Tales from the Crypt: “Last Laugh” 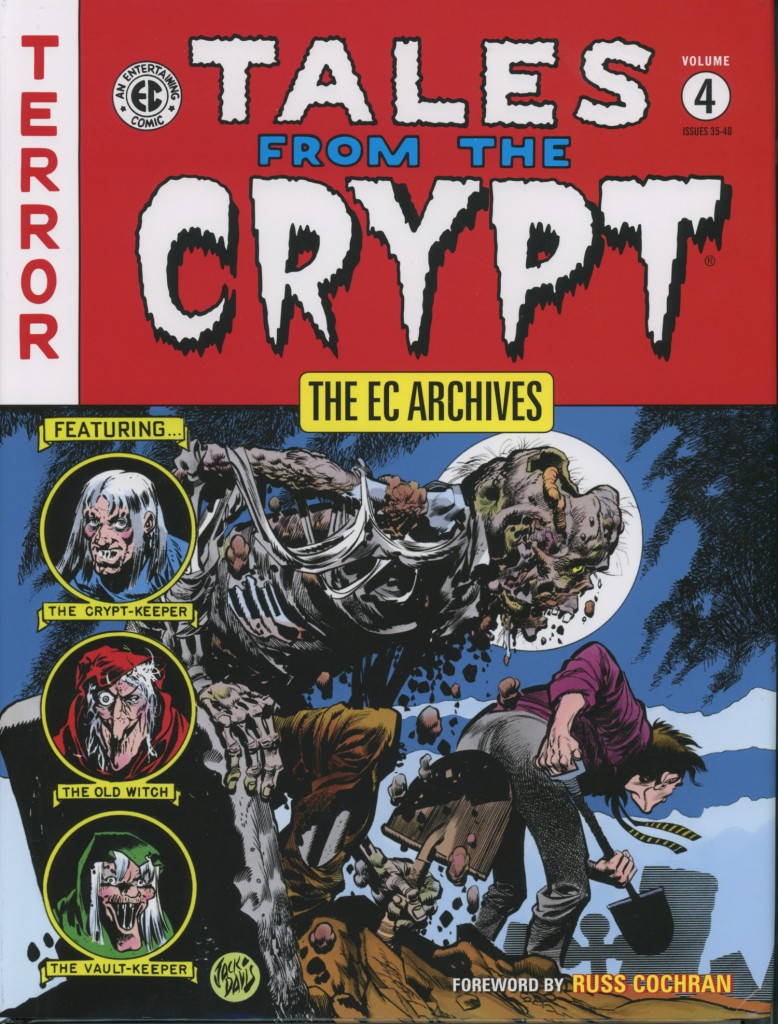 I got volume 4 of the Tales from the Crypt archive last week, and it’s even crazier than volume 3. It’s a beautiful edition published by Dark Horse Comics, and I highly recommend it to any and all fans of early 20th century pop culture. My son and daughter have been eating this stuff up, and I am enjoying reading it to them at night. I put on my best crypt keeper screech. Miles reads it again and again, and when I asked him which one of all the stories is the scariest, he points to “Last Laugh.” But not so much because it’s scary, but rather because it’s sad. And damn is it sad—the ultimate in parental parables of neglect and revenge! 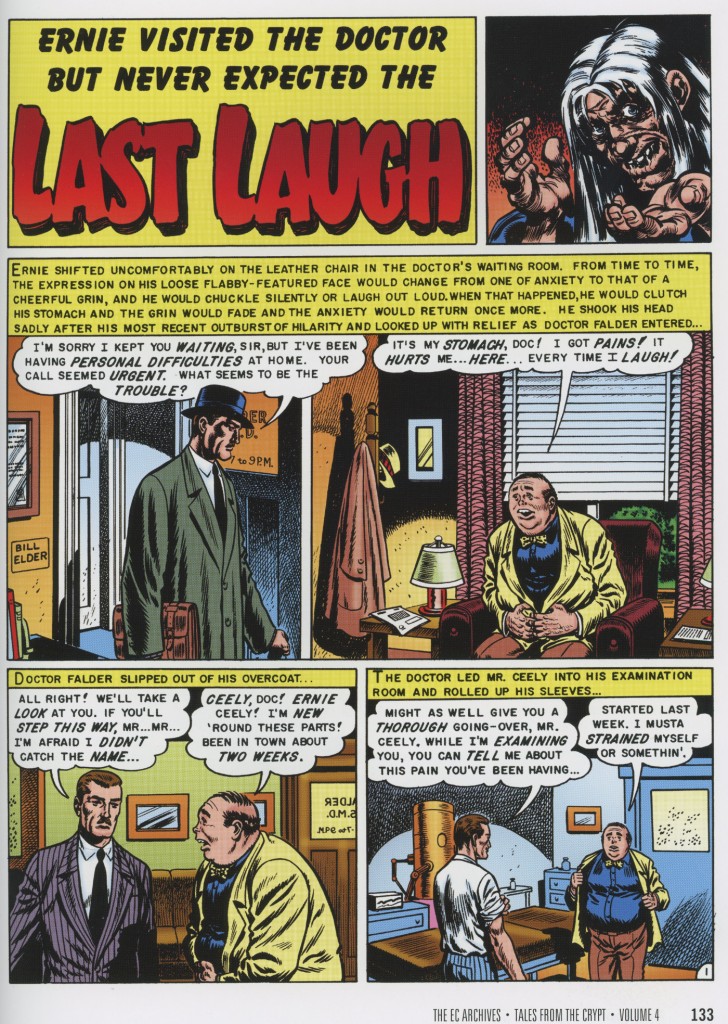 Let me explain, Ernie is a practical joker who goes to the doctor complaining of stomach pains. While being examined he explains how he strained his stomach pulling a particularly funny stunt. But before he gets into the details, he recounts some of his more quotidian practical jokes. Nothing like a classic crank call to characterize a harmless prankster. 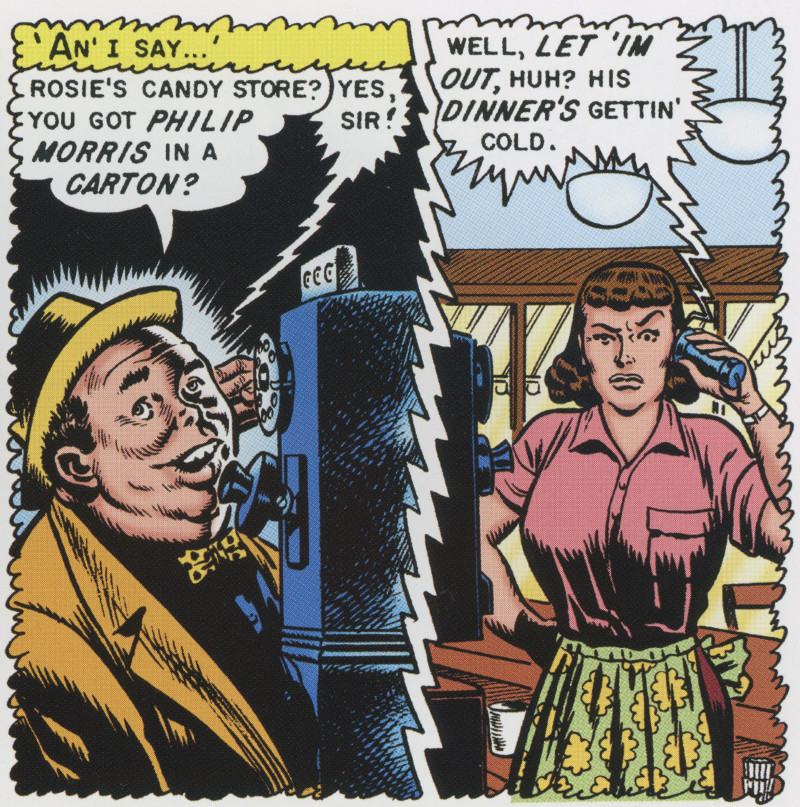 As a quick aside, the artist for this tale, Will Elder, was himself an inveterate prankster. He was also one of the founding artists for Harvey Kurtzman’s Mad magazine. In fact, as a testament to how formative EC Comics were to the comics industry, three of the four artists illustrating for this particular issue of Tales from the Crypt would eventually be comic industry Hall of Famers.¹ Also, any fans of Robert Crumb’s comics might quickly realize the influence of these artists on his own vision, the figure of the candy store proprietor seems right out of Crumb’s work.

Anyway, this practical joke takes is craft to the next level when he decides to dress up some horse meat in kids clothes and lay it on the local train tracks. WTF! 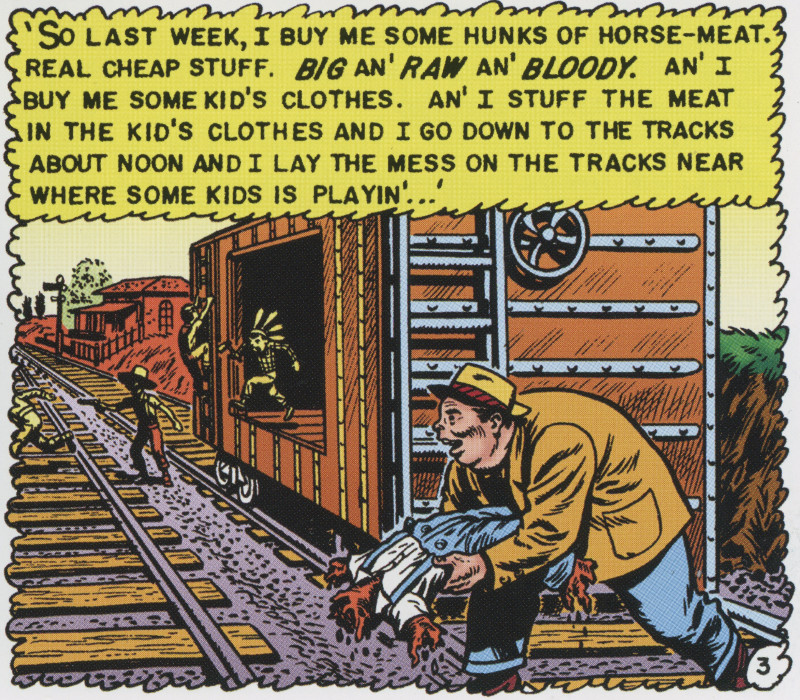 And, of course, why not hide behind a parked train car and let out a blood curdling scream to accompany the ravished torso to scare the neighborhood kids.

Can this comic get any darker? Well, yes actually. The shadowy doctor figure begins to recount a dark tale about a family from the area. Notice how the narrative is being filled in from another perspective, and you get another image of the train screaming by, but this time from the kids’ point-of-view. Also, I love how the Tales from the Crypt comics use the upper portion of the comic panels to provide full blown narration of events. Far more literary that most other comics in that regard. 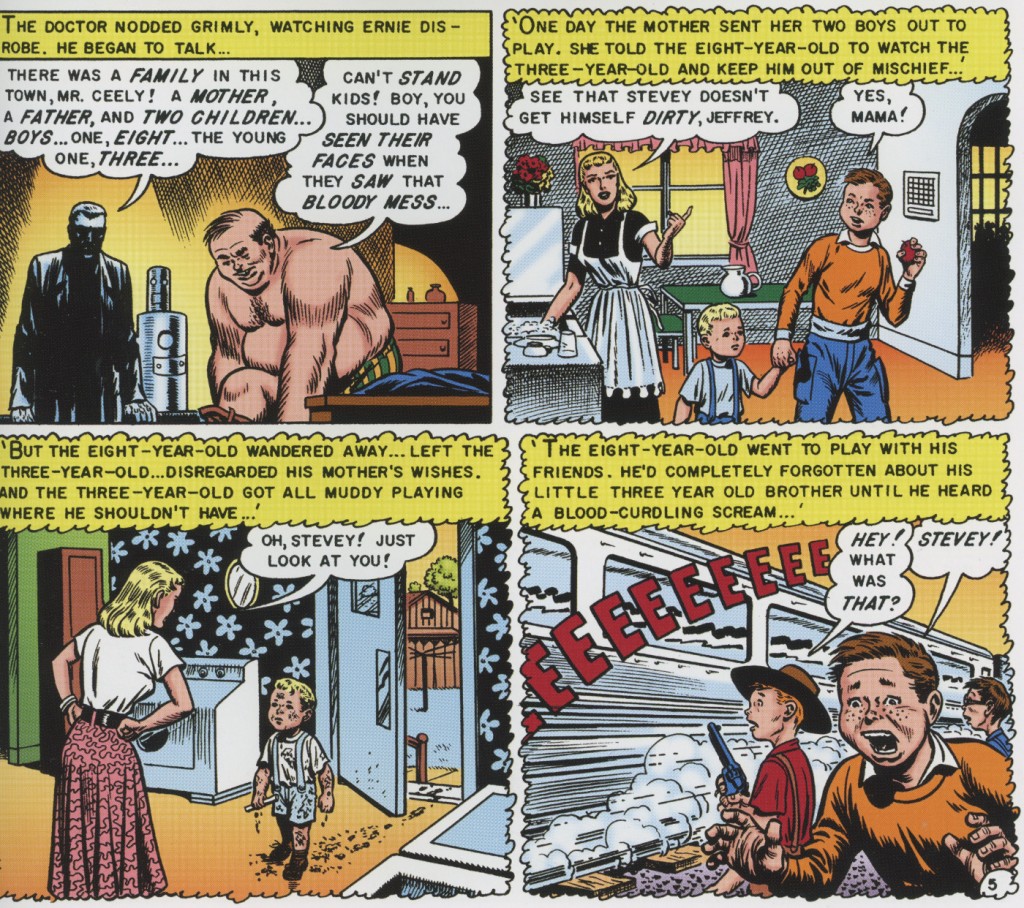 I mentioned it would get darker, right? This is the part that seems to have scarred Miles (Tess was unphased 🙂 ). Jeffrey, the 8 year-old charged with watching his three year-old brother, thinks the bleeding hunk of horsemeat is his younger sibling Stevey and freaks out. He runs home screaming bloody murder and in his state of trauma runs across the street and his hit by a truck. To make matter worse, his mother hears the scream and leaves the three year-old in the tub while running out to see what happened. Little Stevey drowns. Crazy, right? 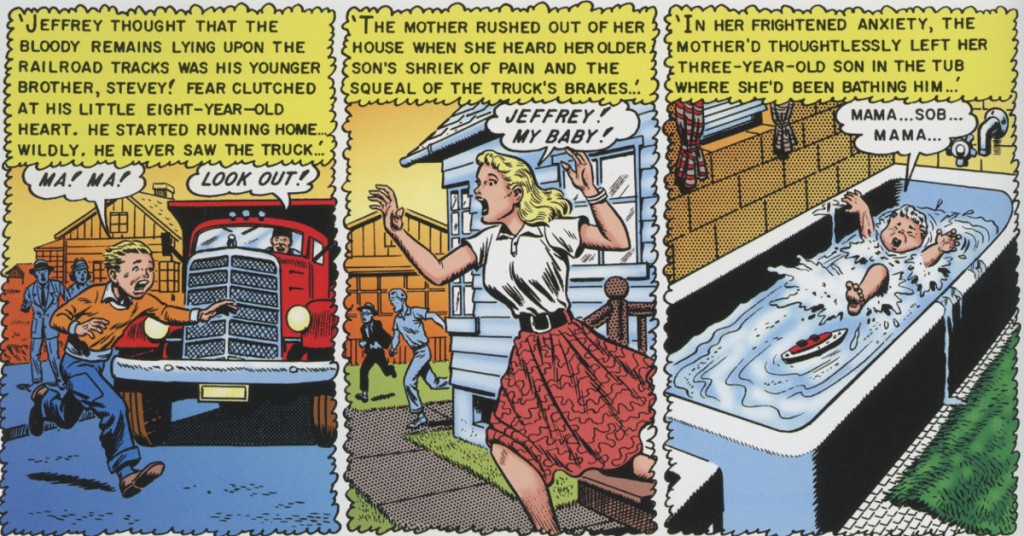 After that, we get the denouement.

That was the doctor’s family, and turns out when his wife realizes both her children had died within minutes of one another, she dropped dead of a heart attack! The brutal revenge killing ensues, and the story wraps up with some quips from the crypt-keeper. I just love the panel when the doctor does the reveal—I’ve seen it a million tines since in all those Marvel comic moments—but never with this much emotional baggage. Now that’s entertainment!

Turns out EC Comics horror comics were relatively short-lived, and the center of a broader political campaign culminating in the US Senate Subcommittee on Juvenile Delinquency. The subcommittee targeted violent comics like Tales from the Crypt, arguing they contributed to the juvenile delinquency crisis in America. As a result,  the self-regulating Comics Code Authority was founded and introduced censorship that seemed to target EC Comics horror magazines:

Publishers were forbidden from using the words “terror” and “horror” in titles, for example, and forbidden from depicting zombies, werewolves, and other gruesome characters and outré horror fiction trappings.²

So, not only did this publication launch the careers of some of the greatest comic artists ever, but was also behind an unprecedented outbreak of juvenile delinquency. That’s awesome! No wonder Miles and Tess love them. Hell, soon they may even graduate to video games 🙂

1. The three other artists that illustrated stories for the October/November 1953 issue  of Tales from the Crypt were Jack Davis, Reed Crandall, and Graham Ingels.

This entry was posted in pop culture and tagged comics, Tales from the Crypt. Bookmark the permalink.

3 Responses to Tales from the Crypt: “Last Laugh”