The Afterglow of Kilobyte Age Art

I came across the keynote presentation Bruce Sterling delivered at the transmediale conference wherein he discusses the afterglow of internet rubbish that is the basis of some of the most interesting digital art of our moment. His talk ranged far and wide—which is why they rule—covering web surveillance, corporate concentration, and the realities of the web we inhabit that are themselves temporary. The future afterglow of discarded data is the leftovers of who we once were and what we once did online.

My favorite part was when he mentions Olia Lialina’s and Dragan Espenschied’s One Terabyte of Kilobyte Age Geocities archival art project. I’ve written about this before on the bava, and Sterling’s framing it as an example of the afterglow is awesome, it points to the fact that the history of the web is both rubbish and art at once—mementos from an arguably transformative moment in time on a site that was one of the earliest planned communities on the web. What was a cool coincidence was that on the same day I found the video of Sterling  the One Terabyte of Kilobyte Tumblr posted the following screenshot: 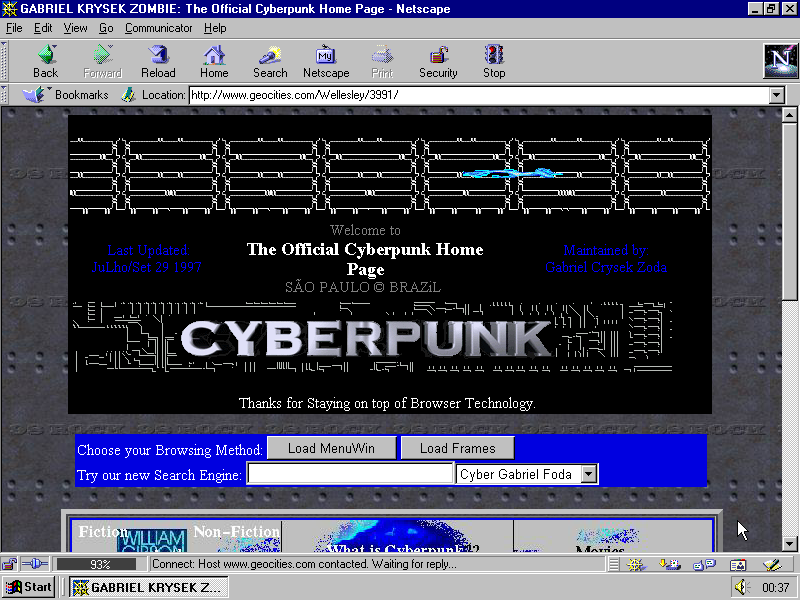 Something which Bruce Sterling picked up on and tumbled as well. It’s interesting because during The Internet Course I taught last night, one of the students was arguing, in terms of web history, Geocities was very much Web 2.0—easy, community driven, and place to create. Not sure about the easy when I used it in 1995 (although it was easier), but the idea of Geocities as a space to actually code a bit on the web and forcing you to understand some basic protocols like HTTP and FTP was a reality. It’s also crazy to be thinking of Geocities as part of the Afterglow, it’s recent history but art at the same time, the relics of a moment I see in my Tumblr on a daily basis are some of the most compelling images in my dashbaord. I can’t help but think about that moment, the afterglow of a web which has changed and will continue to change. It’s not necesssarily the beginning or end of anything, and that’s actually reassuring sometimes.

Add to the strange lattice of coincidence that also holds together the unvierse of Repo Man yet another thing: today is the one year anniversary for the One Terrabye of Kilobyte Age project. It’s all connected.

1 Response to The Afterglow of Kilobyte Age Art