The Art of Shit Talking

There are far more definitions of shit talking than I ever dreamed of in my philosophy, but the one I am referring to is the act of “saying things to amuse people and playfully mock them.” For me the web has many faces, but one of its most appealing is that it provides a uniquely playful space to banter with people. Spaces like blog comments and twitter provide remarkable opportunities for talking shit. For example, this afternoon I had joked with Tom Woodward (who is awesome at taking such things to the next level) and in turn he created an animated GIF to let me know I was skating on thin ice with my earlier remarks. Here is that GIF:

I wasn’t sure what the hell it was, I just knew it was nutty. Turns out it is a scene from this music video of that crazy South African Zef band Die Antwoord. I had mistaken it for an Alabama house party 🙂 Funny thing is, this started a bit of a back and forth on Twitter with me talking a little shit about how I could out exercise Tom, how I made ds106, etc., etc., run-of-the-mill stuff for me, getting under people’s skin is too easy on twitter, but it is also kinda fun. Sometimes there is a thin line, but within the right community a little friendly banter and back and forth can lead to great things. For example, after a fun back and forth with Tom he went on to create six more Die Antwoord GIfs that are all both disturbing and amazing. See for yourself.

I would venture if we weren’t going back and forth on Twitter they might not have gotten made. Would that be the end of the world? Maybe not, but he did make them, it was fun, we did connect, they are awesome, and as usual they are generated out of a sense of fun, play and shit talking. One thing is for sure, ds106 as a community is the better for it. Why? Well, two more of ds106’s finest artists, Giulia Forsythe and Michael Branson Smith, started to play along as a way of using the animated GIF to talk shit on me. Giulia oh so subtely suggests I might have had too much coffee with her bava attacks shark GIF:

And then pulls out another GIF to ask the question “what are you really made of?”

And then there was some allusions in the twitter banter about me being the ds106 overlord, kind of “the man with no eyes” prisoner guard in Cool Hand Luke, so Michael Branson Smith provided the visual—a little trigger happy Groom.

And what you start to realize pretty quickly is we are jamming, people are making stuff on the fly, having fun, talking smack through all kinds of media, and then the moment passes. And that’s that. It happens all the time in #ds106, these are the interstitial moments that are impossible to reproduce in your course systems—the hallway spaces that have little to do with the course and everything to do with the people in it. You shouldn’t look too hard for these events because they’re always there balled up in the potentiality that are the awesome people all around you—it just sometimes takes a little shit talking to activate them. As my good friend Todd Conaway knows all too well: 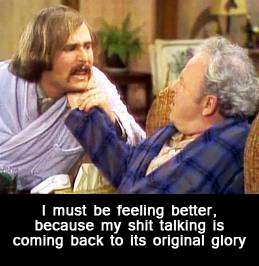 Make some art dammit, and talk some shit.

9 Responses to The Art of Shit Talking