The third iteration of ds106 is coming to an end in the next week or so, and there is no question in my mind that this last semester with its open, online component really elevated this course to the next level. That coupled with team-teaching with Martha Burtis at UMW has pushed this class into the stellarsphere. There is a lot to write up in this iteration, and this ds106 99 posts series is my simple way of pushing myself to try and chronicle some of the magic of this experience before it vanishes.

Anyway, something that happened last night—thanks to Ivania Martinez, Catherine Mohr, and Miña Recta (who actually took ds106 last semester)—was an excellent example of how this class has emerged as part of the fabric of the UMW community as well as moved beyond it. A simple thing Ivania started with the twitter hashtag #jimgroomstudentproblems illustrated for me how and why Twitter has been such an indispensable part of this course. It has been crucial from the beginning for the open and online portion of this course, but also proved invaluable for the completely online section I’m teaching at UMW. Let me explain what happened with this hashtag last night as a way to try and understand why twitter has blown my mind this semester in ds106. 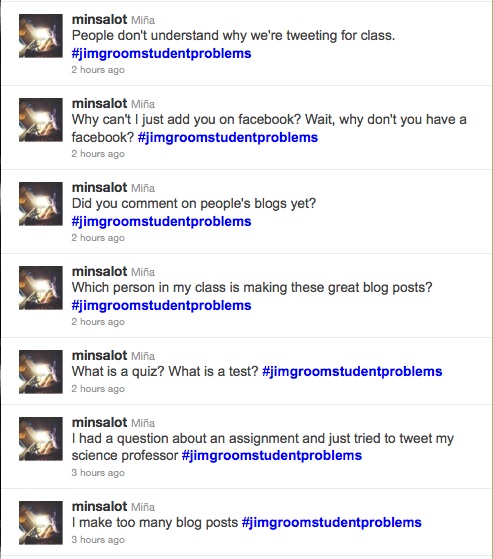 First off, Ivania was trying to get in touch with me last night through Twitter—as an aside Twitter has been where almost all of my communications with students has happened this semester in both my online and face-to-face classes—and I had been a bit incommunicado because I’d been working on some other stuff I needed to get done. Now when I say I am incommunicado on Twitter it usually means I take more than 2 minutes getting back to someone, say closer to about 10 or 20 minutes 🙂 And I really have had a constant stream of conversation and immediate feedback with so many of the ds106 UMW students on twitter that I believe this component has made the students in the online course at UMW feel like they are part of a larger learning community that is also instantaneous, even though they don’t have a scheduled class time (we haven’t met synchronously once all semester save the first day). 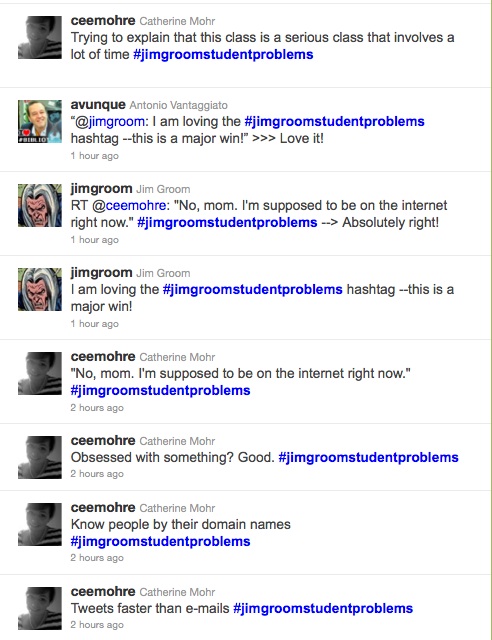 What twitter has brought to the online ds106 equation became apparent to me when Ivania, Miña, and Catherine (all disembodied presences in ds106) figured out a way to get my attention, have some fun, and use twitter as a tool to build the ds106 community. How did they do it? Well, they came up with a hashtag theme that uses creativity, banter, and a bit of comedy to characterize some of the unique problems of the ds106 student. When they did this they did a number of things: they turned a simple query about whether I had watched their mashups yet into a playful game; they framed a narrative about the class; and provided a way in for others to riff creatively on a theme. They were using twitter hashtags as a way to tell a kind of flash story—and what happened is at least one student from every one of the three sections of #ds 106 I’ve taught over the last year and a half joined in and played along on Twitter. Isn’t that crazy? I mean even some UMW students who never took the class, but rather heard about it on twitter and beyond, chimed it. 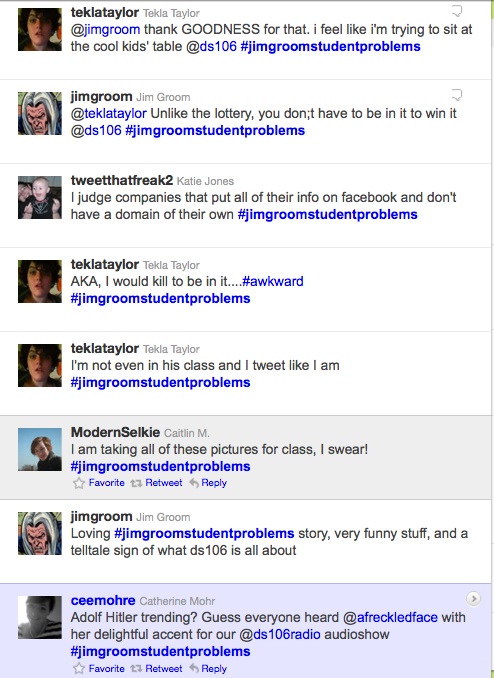 Students who took the class more than a year ago were still apart of the stream, making it easy for them to play along and help shape the story of the class as an ongoing experience well beyond the arbitrary start and end dates of a course. It dawned on me just how powerful this indiscriminate tool for broadcasting 140 characters really can be for creating an online course community that is so often missing from the traditional online course—it becomes a virtual, public and communal space that moves beyond our idea of the classroom—and in many ways remains equally ephemera (try recreating conversations in twitter from a year ago)l. And the way it represents layers of students from various classes over the course of a year and a half is even more amazing. This is by no means the first time alumni of ds106 have come back on twitter, or even back to the actual face-to-face classroom or remained present through their blogging—a good number of them have remained part of the community. What’s crazy though is an increasing number of UMW students who never took the class have contributed a major amount of time and effort to it—whether by helping their roommates, suite mates, friends, boyfriends, girlfriends, etc., do their assignments (I’m talking about you Karen Karnage and Ace Bessman—and that is not cheating, that is ds106!) or jumping into the Twitter stream to have fun with the narrative of the class as it unfolds.

Maybe the fact that all this and more has happened isn’t unique to Twitter per se, but I would argue that Twitter’s dead simple interface, quick format, intuitive grammar and syntax, beautiful visualization of an open network, and less than no overhead approach made the ability for others to follow along as they like and jump in and out as the stream caught their attention has been crucial. What’s more, Twitter (or any networked space like it, though how many are there really like it?—a critical mass of people is important for serendipity and network effects) is ideal for a class like ds106 that is a constant happening not controlled by any one person. A space where things, events, and ideas emerge amongst various groups of people organically. In what other environment can you so easily scan the community activity, chat with one another, joke, share links, post videos, or even use twitter itself to tell the stories of the class (Electrovert’s final project is doing this brilliantly) out in the open?

It has been through the ds106 hashtag on twitter that I have been keeping abreast of what’s going on at any given time, it has even spawned at least two other hashtags/communities: #ds106radio and #ds106tv. What’s more, it has drawn attention to the class itself, as well as the work of students—so many of whom are doing some truly amazings stuff. The art of promoting and reinforcing the creative habit through a tool like Twitter cannot be underestimated for getting students excited about what they’ve done. I know first hand how well it works for me when someone bumps the work I have done.

What’s more, the hashtag is a dead simple syntactical element that allows you to search for tweets on a particular theme, topic, subject, course, etc. But these hashtags can also be hijacked to let you have some fun, they can encourage others to be creative, to riff on an idea, and to make something playful out of something seemingly functional. I think the #jimgroomstudentproblems tweets exemplify this exceptionally well. 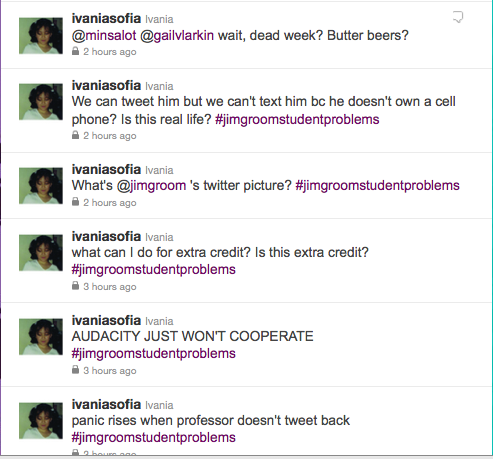 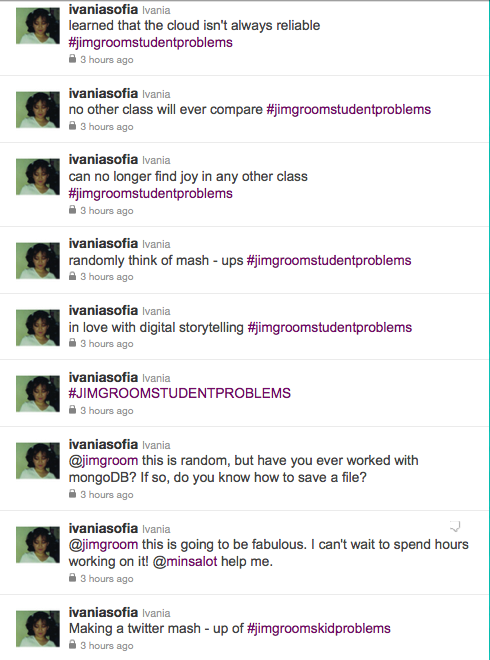 Fact is Ivania, Catherine and Miña told a very powerful story for me last night about Twitter and its impact on ds106. So I’d like to thank them! And when you add to that other examples like the use of twitter in ds106 helping at least one student land a job as a journalist at a newspaper in New Jersey the case for it seems to be made in my mind. And while I’m not simply saying ds106 got Jessica Masulli that job—she did that all by herself—but it doesn’t suck that the practices of networked, open learning we explored in ds106 could actually be reinforced for her (and me) as something that various employers need from graduates of our institutions. Not should this be considers an important, practical means of communication at UMW—but it also needs to be a considered, critical practice of communication in and around the participation of online (and face-to-face) courses more generally. I would argue it should be a requirement for online courses—where else can you get such a powerful platform for making a larger community for all online students at a university? Experimentation along these lines might breath new life into an often antiquated and reactionary vision of the liberal art—that vision should be hijacked, much like a Twitter hashtag—for the digital age. It should be about the creative act and shaping the media environment we currently exist within—that seems to me a far more powerful and useful vision for the future of liberal arts. Who is currently rethinking the liberal arts along these lines? That is not a rhetorical question.

This entry was posted in digital storytelling, ds10699 and tagged 99ds106, ds106, twitter. Bookmark the permalink.