Jason Toal (a.k.a @draggin) has been on fire with his mixes for ds106 Radio for a long while now. He has consistently been putting out amazing stuff, and his scratch, cut, and recombination powers are to be envied. And his latest masterpiece, “CAnU Dig it?” is particularly amazing in my mind because it plays with and on the introductory audio file you hear every time you login to ds106 radio, something that is such an integral part of my life these days it is almost iconic. It’s a clip from Walter Hill‘s gangland masterpiece The Warriors (1979) featuring the classic line “Can you dig it?!” from the scene wherein Cyrus is preaching to all the gathered NYC gangs about a truce that will make them the single greatest power in the city. A call to collective action that challenges the power structure at its very core and re-imagines a city run by the disenfranchised. I love his vision, and I have written about this film (and that scene) at length on this blog. The idea of miracles, the “man turning us against one another,” “fighting for our little piece of turf,” and an alternative from the actual reality that takes over that very film—and so much of U.S. political history over the past 60 years: visionary shot by lone gunman and the status quo is not only preserved but more rigidly reinforced. 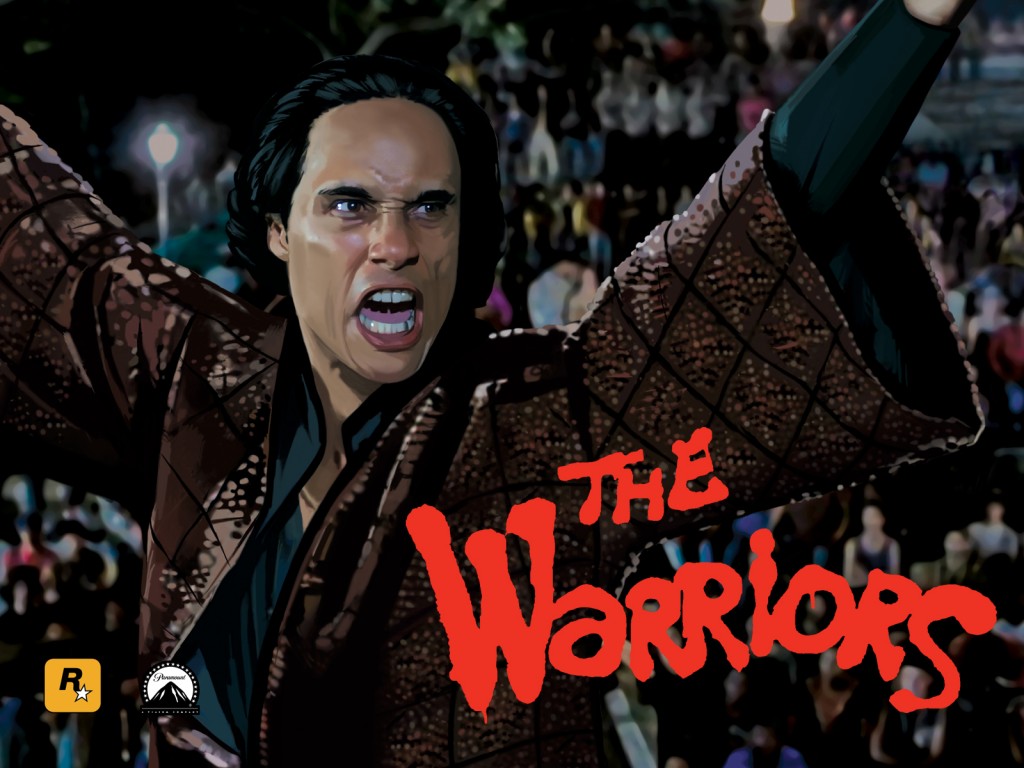 This all got me thinking about a couple of things while I was bopping around to draggin’s awesome mix. First, I was impressed by how it focused not only on the “Can you dig it?!” line, but the vision of possibility that leads up to that affirmation; he uses the actual speech to contextual the “Can you dig it?!” chorus. Second, it helped me realize that ds106 Radio is, at least for me, that alternative narrative of possibility wherein we both share take culture that is meaningful to us freely as well as re-frame it more personally for one another—we control the vertical and horizontal, which is just another way of saying the means of production. The idea of this platform flying in the face of controlled channels of distribution. Lastly, it seemed to be a brilliant anthem for the groove that ds106 more generally has infused into a sense of online community, connection, and possibility.

So, a couple of more things before I finish. I actually was simultaneously doing a Warriors-themed broadcast on ds106 while writing this, and you can find the archive below. It got me thinking about my own fandom assignment for ds106, and how I would like to rewrite The Warriors to be a film that actually focuses more on the revolutionary rhetoric of Cyrus than the chaos that ensues from his assassination. A film wherein the gangs to maintain the truce and begin to reclaim the city—I will be working on that in this blog (probably as part of this series) and I think it will be fun.

Also, how cool would it be if for the session on ds106 radio for Northern Voice we actually performed out this idea of the radio as that alternative, radical vision that Cyrus articulated and, in fact, it didn’t end in blood like every other revolution. I was thinking we all dressed up as representatives of different gangs and do the presentation straight-faced as if we were at an international summit talking about the truce and our intentions of rethinking turf, power, and the means of imagining our online communities. @draggin’s set can frame the backdrop musically—present a kind of anthem— and we could use the radio and TV as a means to have fun with this theme. I am thinking so something with the TV like pull in @Timmmyboy as an evening news reporter speaking about the ds105 truce and some particular details. It could be a lot of fun, and it certainly would push the whole thing towards a cultural performance rather than a presentation.

In this ds106radio broadcast: The Warriors Mix, thoughts about and for this very blog post, and some clips from The Thing (1982)

This entry was posted in digital storytelling, ds10699, ds106radio and tagged 99ds106, ds106, movies, the warriors. Bookmark the permalink.