The ds106 Kickstarter: Classes for and by the Community 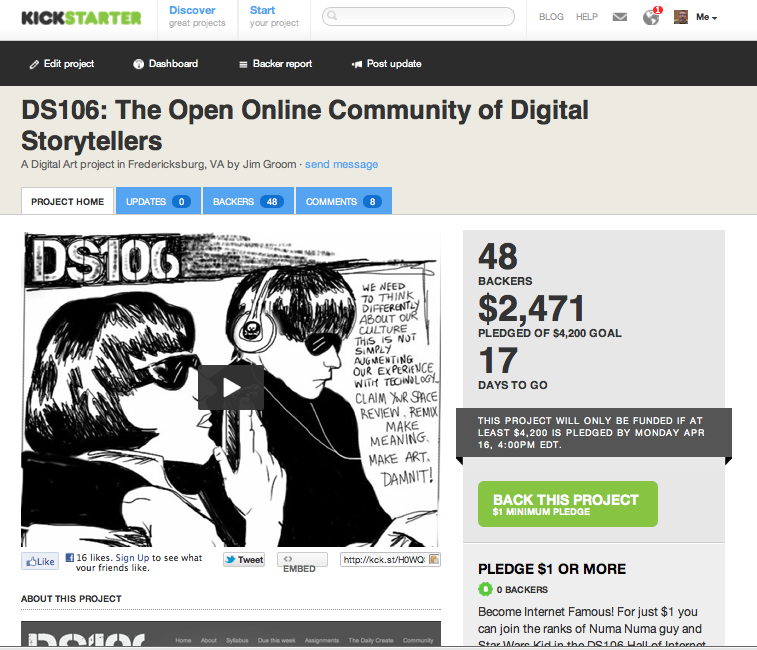 At 4 PM yesterday Tim Owens and I launched this Kickstarter to raise money for a more robust server to run the extremely resource intensive ds106 site. The server itself is $2,830 for the year, and the remaining $1400 or so is to purchase the swag that we will be providing for those pledging. As of my writing this post, 8 hours later, the project is 58% funded with $2,471 given by 48 different backers. Crazy! As usual the ds106 community represents, I know #4life gets old for some, but its true in my heart. You rock!

What’s more, the whole experiment of putting together a Kickstarter campaign has been a blast. All credit goes to Tim Owens who had the idea last week and subtly pushed me to try it when I told him I needed to find a way to pay for the ds106 server migration (I am perpetually broke). He blogged his thinking about the whole thing here, and while at first I balked at the idea of a Kickstarter because my first reaction was that money can only invite the Snake into the Garden. But after more conversations around DTLT it became clear that if ds106 is a community course then why shouldn’t it be funded by the community? Currently ds106 has seven colleges using it as a framework to varying degrees, so it’s much more than a couple of UMW classes—and this doesn’t even take into account the open, online students. So why should UMW have to pay for it? Why have CUNY or SUNY or any of the institutions pay? Why not share the costs of the class as a community? This way we can maintain the freedom we currently enjoy without worrying about losing our infrastructure, at least for a year or so.

After we worked through actually doing it, first thing was to make a video to communicate what we needed and what folks would get in return.  And given this is video week in ds106 at UMW, what could be more appropriate? Tim and I worked on the script, the prizes, and the general tone of the whole campaign over the weekend and then shot the video and edited it on Monday and Tuesday. It all came together so very quick because Tim had the whole thing in his head fully formed, and I just went along for the ride. In Tuesday night’s ds106 class I got feedback from students on what worked and what didn’t work in the video we created—and as a result the whole class was dedicated to talking about Kickstarter as an alternative means of funding, as well as thinking about how video can be used to communicate your story and to get your point across. Making the video was fun as hell, and it also marked my first foray into the new Final Cut Pro, which I personally love. I’d love to know your take.

This entry was posted in digital storytelling and tagged ds106, kickstarter, video. Bookmark the permalink.

8 Responses to The ds106 Kickstarter: Classes for and by the Community