The Educational aPOPcalypse in 25 Animated GIFs

It”s been a busy week closing up this semester’s ds106 course, but I figured I should blog about my TEDxNYED presenting experience before it fades into memory for good.

I was trying to experiment wildly with this one because I had the impression that what made TED talks at all interesting was that they were presented in a compelling fashion, to that end I created 25 animated GIFs that I would use to animate my talk. It’s no surprise to any regular reader of bavatuesdays that I love me some animated GIFs, but this presentation choice was also premised on the brilliant location of the conference at the American Museum of the Moving Image in NYC—which is in many ways all about the animated GIF. The whole museum is steeped in the 100 year, popular culture that brought us to the aesthetic of the internet—so much so that there was an exhibit dedicated to the animated GIF in the lobby! Seeing this I was even more hopeful my presentation would resonate. I have a lot more to say about the museum, but I’ll save that for another post.

I think my presentation went pretty well in the end, but not because it was necessarily good or insightful—in fact on those counts it was average at best. What worked was a sense of being there with the audience, a connection that was pretty awesome and that I still get goosebumps thinking about. 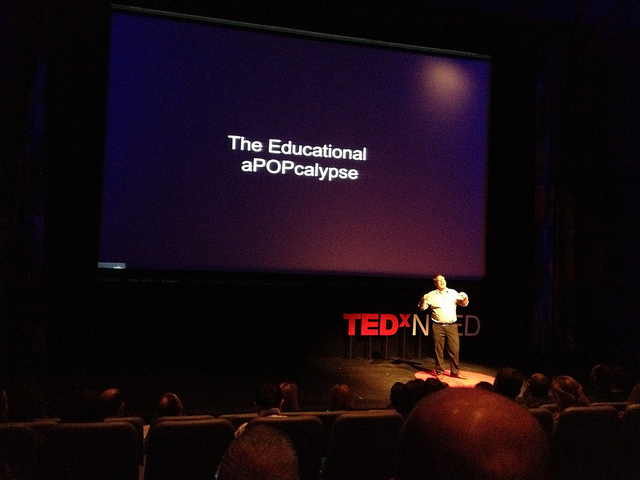 But that is a bit abstract so let me try and lay it out for you. I had my 25 GIFs cued up in a Google Presentation and I was given a remote and told to go out there and break a leg. Only problem was my slides wouldn’t move, I was trying to move them while simultaneously dancing on stage in hopes that someone in the control room would bail me out, but after what seemed an eternity or two (which in reality was a minute or so) I dug in and realized I had to make my point without the slides. I was kind of excited about getting over the potential meltdown; it was pretty scary for about 10 seconds there, I was making no sense and obviously flailing. And just as I started to get a rhythm and do the presentation through my own acted out versions of the animated GIFs my slides came back to life. Now by that time my whole narrative was thrown off almost entirely, but at the same time the audience’s generosity was palpable. I could feel they wanted to laugh, they wanted to encourage me, and they wanted to have fun. They were sympathetic to my flailing, and the potential nightmare of the experience turned into a pretty amazing connection with a faceless group of people in a darkened auditorium that taught me something about the idea of performing, being there, and speaking to, not at, a room. I’m pretty sure none of this will come across on video, and the train wreck that it was is the train wreck that it will be for most on the outside looking in, but at TEDxNYED last weekend there was a truly kind and open audience that embraced the chaos and as a result we had a number of laughs over a 9 or 10 minute span—I cut it a bit short to stay the bleeding.

A few things I loved about the event was the venue (AMMI rocks!),  the opportunity to experiment with the craft of presenting, and an occasion to hang out with the great Mikhail Gershovich (who was amazing!) in the AMMI exhibits during the afternoon (more on that soon!).

What follows are the 25 animated GIFs along with a  brief explanation of my points. This presentation really wasn’t delivered this way, but I will try some version of this again, and I am putting it here as both a way to credit all the GIFs as well as a way to keep the resources all in one place and accessible. Take the jump for the GIFs….

I started out framing how the pop culture narratives of our moment are consumed with end-of-the-world post apocalypse. I took a few examples from Mad Max 2: The Road Warrior to make my point.

Looking out over the abyss, the sharks circling the last vestiges of society

The dangerous, if not seductive, rhetoric of blow it all up, let’s start anew

And if we aren;t talking about the post-apocalyptic wasteland, then we are consumed by zombies, the undead, and a form of economic and social cannibalism. I used the following examples from Dawn of the Dead to make my points:

A zombie montage, the all too human faces of the zombie fetish—a consumer driven frenzy

They’re coming for you Barbara! Watch out!

The fear of turning, we can all become zombies if we aren’t careful. In fact, they are us and we are them.

From here I transitioned to how the dominant cultural narratives of our moment are in many ways part of the rhetorical attack on education as a whole. I used Mike Caulfield’s awesome comment here on a post by George Siemens for my inspiration—thanks Mike! I basically talked about how George Bush’s “No Child Left Behind” –insert MaCauly Culkin animated GIF ;)—was part of this rhetoric of the shock doctrine around failure, zombie teachers, and undead schools.

No Child Left Behind

I talked about how teachers had a gun to their head every minute of their life.

She would have been a good teacher there had been somebody there to shoot her every minute of her life.

Jackass administrators lording it over the teachers and students

Two Months, Bender, I got you!

The desparate sense of being alone in institutions, the rhetoric of division and helplessness as a means of alienating communities and workforces

It’s a rhetoric of crisis that prevents us from looking at the roots of the issue, it’s is a manufactured crisis that can be more justly titled a scam. [Thinking a lot about David Harvey RSA talk about Capitalism in Crisis here, and there is more to develop for this talk in that regard.]  Occupy Wall Street ? A production of crisis

It’s a shock doctrine! A means to scare us into reacting rather than to things about the relations that put us in this situation. It is a way to make us scared, attacking one another, and more generally stupid. Or as Mike Caulfield notes:

It’s the Shock Doctrine approach to corporate takeover. If you can convince people it’s a crisis you can force change without accountability. Something had to be done!

Which ultimately pushes education to the brink of corporate profits:

So we need to have a serious talk. Can we talk!

We live in a moment of unparalleled possibility, we have realized the 1977 Star Wars dream of a hologram with Tupac of all rappers!

The power of the visual vernacular, the example of the Pepper Spray douchebag cop and My Little Pony. [An aside about Bronies]

Since the onset of ds106 I am all Rainbows and Unicorns. [Giulia Forsythe’s “Can You Dig It”

Open and online for anyone to take. The power and possibility of sharing harnessed in amazing and pwoerful ways.

Did I mention it’s fun?

Oh yeah, and we are looking for someone to sponsor a bus for us 🙂

No more digital facelifts, it’s time to build authentic experiences on the web platform that informs our culture everyday all around us.

Thanks for your time and patience, it would be my honor to buy you all a drink “Drinks for all my friends.”

And that’s it, 25 animated GIFs to tell the story of Educational aPOPcalypse.

12 Responses to The Educational aPOPcalypse in 25 Animated GIFs