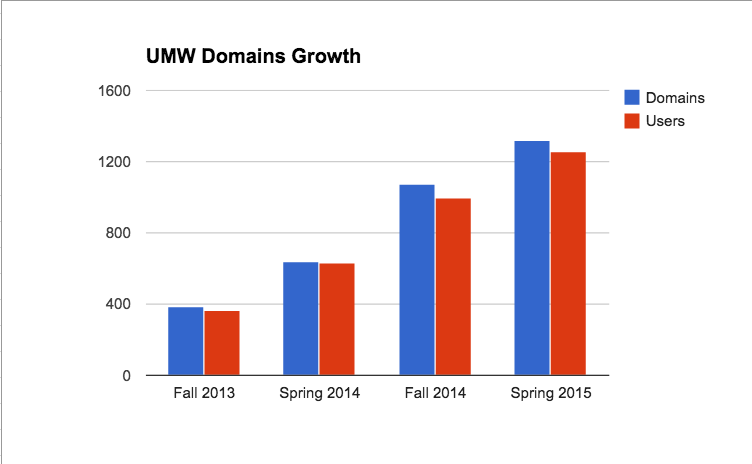 Mary Washington is doing a follow-up story on UMW’s Domain of One’s Own a year-and-a-half later. The occasion provided me an opportunity to start breaking down some of the data we’ve collected thus far. We got the data out of Banner thanks to Jill Ellington, who works in the enterprise systems group. We then imported that spreadsheet of data into the service Intercom—I wrote about it previously here—to help break down and segment the numbers to see how usage by class of student(i.e. Freshman, Sophomore, etc.), number of faculty/staff, active users, how many courses, number of faculty/staff, etc.

Also, we could break down the aggregate numbers to suggest growth over time:

And here is a segmented view of those 1260 users:

Another interesting breakdown which reinforces what we learned the first year of the initiative is that juniors and seniors with their own domain outnumber freshman and sophomores two-to-one. Originally we thought we would roll this out to each class as freshman en masse over four years, but almost two years in we’re realizing that students further along with their degree (and settled in a major) are far more likely to have domains. This is reinforced by our decision to integrate UMW Domains into specific courses and departments with certain faculty—although that decision was made because students and faculty were not participating outside a curricular context.

One of the things that seems evident to me thinking about Domain of One’s Own at this point in time is curricular integration is king and culture always matters. Thoughtful, well-supported faculty members and enterprising departments that can integrate a broader vision of digital fluency into their courses and programs will continue to drive the value of UMW Domains.  Which, in my mind, means faculty development and support remain the gold standards to transforming our campus culture.

Update: Audrey Watters asked a couple of follow-up questions on Twitter that might be worth recording here. I mean, who the hell am I to argue with Audrey? She’s my god-damned hero 🙂

@jimgroom how many students does UMW have? (that is, what % are active users of domains?)

@audreywatters We have 4000 undergrads, and 800 grads. So about 25% of undergrad population, given that exclusively where this is happening

@audreywatters Targeting it curricularly rather than blanketing entire class (freshman etc.) means it's not a thing, but an approach.

@audreywatters I think that has made an impact on try to slow down any inflation of the numbers. Almost all folks who have it, have used it

This entry was posted in Domain of One's Own, umw domains and tagged domain of one's own, umwdomains. Bookmark the permalink.