Image credit: I think Audrey Watters took the shot but I grabbed it from Kin’s blog

A year and a half ago now, I caught up with Audrey Watters and Kin Lane at the Reclaim Open Hackathon at MIT. I’m still working off the fumes of that weekend, and to be fair a few subsequent meetings 🙂 The image above is a shot of what Kin was sketching out the architecture of Reclaim Your Domain, basically a domain-based hub that enables you to integrate and push all your various content to the appropriate sites, while maintaining the “authoritative” (probably the wrong term, but work with me here) copy in your own space.

The top of the diagram in the above image lists the various resources based on media, rather than services. Under that you have the technologies to push/pull content to the various sites. It will depend on either RSS (OG) or APIs to get that done, and the former will pull, the latter, utilizing JSON, will push the data where it needs to go. [It took me a year and a half to start wrapping my head around this.] Now, if we premise this on an individual’s domain within a network (this was one of the coolest realizations for me during the hackathon) any site could be both a spoke or a hub. A faculty or student’s domain could be a hub for syndicating content—leveling some of the hierarchical biases baked into the course-driven learning management systems. Hubs created and managed by faculty may still be the norm with domains, but that is not an assumption built into the technical infrastructure.

And I wrote all that, to say this. Looking at the way Tim Owens created the custom Installatron package for Known in UMW Domains, the idea that every individual’s domain at UMW has the ability of being both a spoke and a hub for content was realized. 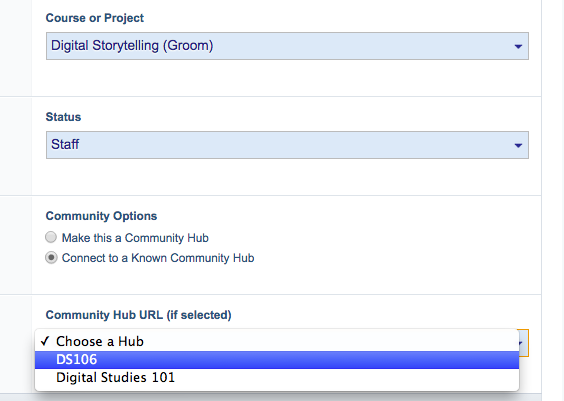 Above you see fields of options you are offered when you create a Known site on UMW Domains. The radio buttons to choose between making this site a community hub, or connecting it to one is powerful choice. The learning system infrastructure is not necessarily unilateral. There was a lot of talk during the MOOC days—remember them?—about students creating their own communities in the forums, on Facebook, MeetUp, or some other abysmal platform. And why? Because it wasn’t an option native to the systems, most of the VC-funded revolutionary MOOC platforms where LMSs that scaled big.

The platform that let’s you keep control of your data, decide where to send your content, while refusing to distinguish your technical infrastructure from the course you are subscribed to is the outline that I am currently watching get colored in with Known. Kin had the idea that when you sign-up for your domain you would decide where you want to import and store your photos, tweets, videos, check-ins, etc. All the while you would get educated contextually, much like the video games do. With the Known hub Ben Werdmuller has made available to us at UMW, we are having students in a couple of experimental classes do just that. 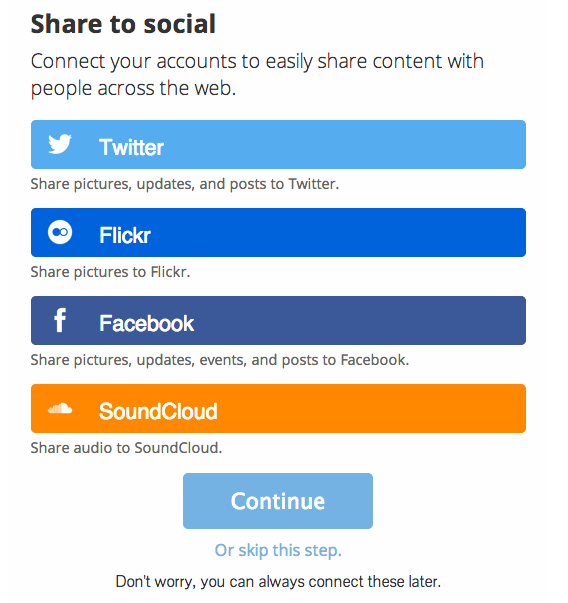 They’re authenticating into Twitter, Flickr, Facebook, SoundCloud, etc. and they’re now posting through Known, keeping the “authoritative” copy. It’s remarkable that a year and a half later one of the former developers of Elgg, along with Known co-founder Erin Jo Richey (designer from the IndieWebCamp school of thought) had already imagined something that fit this vision so well. At the same time, maybe it’s not all that remarkable. Maybe a certain swath of web culture is starting to wake up to alternative means of publishing on the web, one in which we manage our online selves more assiduously. That’s exactly what Domain of One’s Own has been all about for years, and I think we’re starting to see open source applications like Known begin to reflect those values.

At this point I am fairly certain Tim Owens and Ben Werdmuller could come up with a model that would make on-boarding new users for Domain of One’s Own an exercise in getting everyone up and running with a Known site. But not simply to replace Known with WordPress, but to provide a seamless, yet contextualized, experience of what ownership on the web looks like. How push publishing works, and what the principles of a new, indieweb are. Make the on-boarding an experience akin to the first ten minutes of Half-Life 2, an introduction that attempts to scare you into how to play the game, or in this case the web 😉

This entry was posted in indieweb, Known and tagged Half-Life 2, indieweb, known. Bookmark the permalink.

7 Responses to Visions of Known