In this Wire 106 video discussion, Paul Bond and I were joined by Syd Bauman and Travis Peed to look at season 4, episode 2 of the The Wire: “Soft Eyes.” The episode title references a discussion when the teachers are giving Prez advice, and one of them cryptically notes, “You need soft eyes.” This saying is explained more fully two episodes later by Bunk. I shared a bunch of shorter clips from this episode, as well as a few screenshots. I’ll include them below with a bit of context, watch the discussion if you want it all!

I loved the scene featuring Prez preparing his classroom. The colors are great, and as Paul pointed out the chess board is on the bulletin board. The game is still in play. I also like his diligent chipping of gum away from the bottom of the desks. He best not miss the forest for the trees.


Weebay is Namond’s dad?! How crazy is this. Weebay a dad giving his son advice about cutting his hair so cops can’t recognize him? If Weebay wasn’t a complex enough character, frame him as doting father beyond the fish.

This quick shot captures the absent, crushed expression of Lex’s mom as Bunk interviews her about her son’s whereabouts given he’s wanted for murder.

Bunk then describes that very look on Lex’s mom’s face to his colleagues. His ability to capture that expression in such a way you recognize what was bothering you about it is pretty powerful. Writing matters.

In a similar vein, the cast of characters is so established in this series that you can have Daniels doing Freamon impressions, and once again it hits home. Also, is Daniels laughing and smiling?!


Below are a few screenshots I grabbed as well. 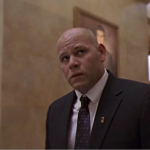 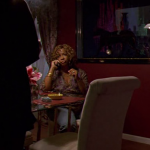 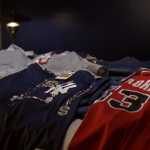