More than a year ago the idea of “reclaiming the web” started to congeal for me as a result of the MIT Hackathon I attended. It’s there where Audrey Watters and Kin Lane plugged me into the future of the web. During that two day stint we imagined a project called Reclaim Your Domain that we’ve been working on in those rare few available moments since. Professionally, reclaiming is all about trying to educate people about how the web works and empower then to take control of their small piece of it. Politically it’s about consciously resisting the increasing centralization of everything to a few online corporate conglomerates. I believe the one makes the other possible.

Reclaim has been the intellectual basis of much of the work I’ve been part of since, and even prior, it just didn’t have that title yet. UMW went live with Domain of One’s Own this past Fall, and that’s a project that has empowering students, staff, and faculty to interrogate how the web works built into its DNA. A year ago Tim Owens and I started Reclaim Hosting, and that has been a means of providing an infrastructure for folks to experiment with managing their space on the open web for a pittance with unparalled support. As Audrey so brilliantly frames it, “The Future of Ed-Tech is a Reclamation Project.” Her willed optimimism is the hallmark of generous and generative humanity and reinforces for me that this is my future as well. 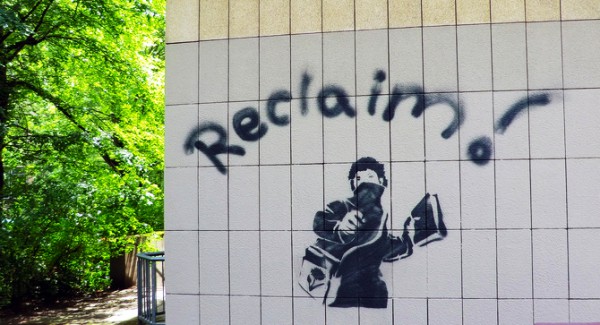 But the cool part of all this that I am starting to realize is that we’re not alone in the push to reclaim. Just the other day Doug Belshaw started drawing the contours of this broader movement in his post on the DML Hub titled “Reclaiming the Web for the Next Generation.” He connects the recent global realizations that  a) we’re all being surveilled online by at least the NSA, but probably many, mnay more agencies; b) our personal data is the currency for the predominant “free” online business models, and privacy is the cost; and c) we can’t solve this alone, we need to start re-thinking our relationship to the web as a connected culture. This post really starts to frame why reclaiming one’s sense of their own domain (to verbally mashup the work I’m part of) has far broader implications than an initaitive at UMW or a few hippies trying to explain web hosting.

In fact, on the same day I saw Belshaw’s post, I also read Jon Udell’s “Mapping the Decentralization Movement”, which is another articulation of the mobilization, as Udell notes, to “re-decentralize” the web. The project Udell is currently work on, Thali, is an experiment to see what a truly peer-to-peer web might look like. But he notes it is just one of many projects like this. He links to a long list of people and projects that are trying to make this alternative web a reality, and it’s a great palce to start getting sense of what may prove to be a broader cultural movement away from the centralization of the web.

In fact, UMW’s DTLT recently talked with Ben Werdmuller and Erin Jo Richey who are leading up Known—one of the projects on that list—about how their software might enable our community to publish to a variety of different services without ever having to login to them. A personal hub for pushing content to these other services, while at the same time claiming the work you are creating locally and decided where you want to share and how. Tim Owens has been experimenting with this software, and I think he may already have it as one-click install for the folks on both UMW’s Domain of One’s Own and Reclaim Hosting.

And that, for me, is where Reclaim Hosting is going. We want to support as many people as  possible explore as many of these applications that enable them to more easily manage and control their piece of the web. We’ll be working our way through the alterative web community’s applications and see if we can make them part of the Reclaim Hosting application universe. Even better, we hope to be contributing to at least one more as part of the Reclaim Your Domain project, but more on that anon.  And start addressing all those applications that can’t run in a LAMP environment, we’re currently working on helping people install and manage  applications that run on a particular set of dependencies in a virtualized environment. We’ll be making a push to explore machine images for a variety of applications and document how to get them working. But more importantly, we’re working on a rollout of the community-focused face of Reclaim Hosting that will provide a space to share the work happening by interersted parties from across the Reclaim universe. 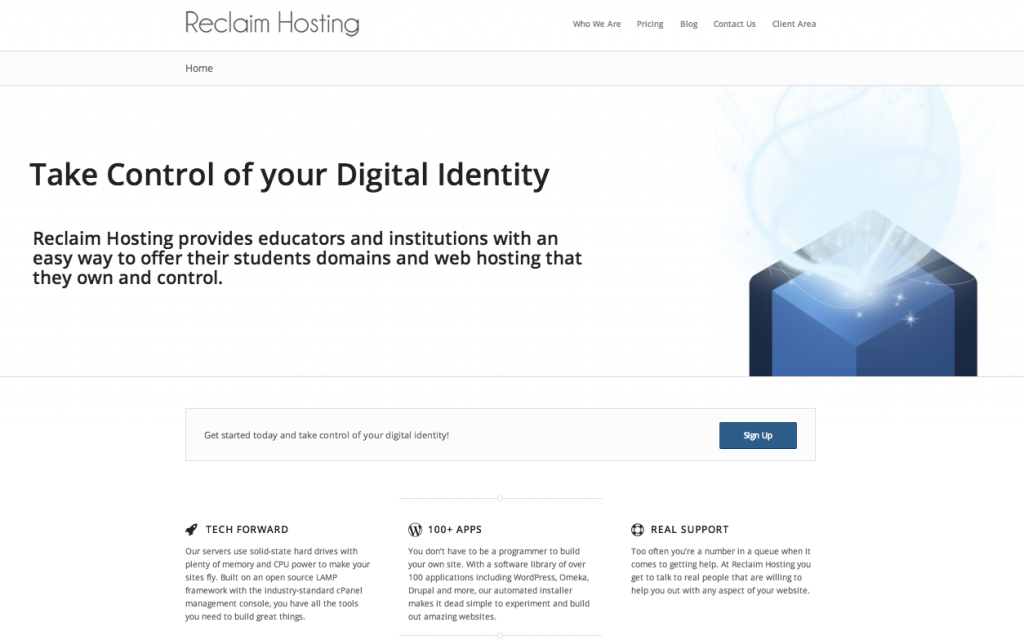 To this end, as you might have surmised, Reclaim Hosting is not a pilot anymore. We’re bonafide! We plan on sticking around to support reclaimers for a long time. We just redesigned the site, integrated CPanel into the client area, and updated our pricing model. Rolling out the next stage of Reclaim Hosting is exciting because it truly feels we are part of a broader movement to help people start thinking about the importance of re-decentralizing the web. And I remain convinced the best way at this is to start by taking control of your own little piece of it.

This entry was posted in reclaim, reclaimopen and tagged reclaim hosting, reclaim your domain, reclaimhosting. Bookmark the permalink.

2 Responses to Where Reclaim’s Going