A Networked History of UMW’s DTLT 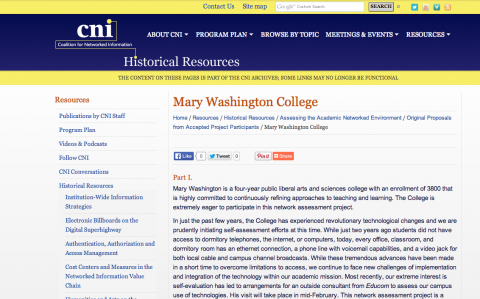 One of the things I derive great pleasure from is learning about the long history of the edtech field. It’s such a strange, intersitital “discipline” between IT support and academics on one hand, and revolution and conformity on the other. It’s a deeply shizophrenic field in so many ways, and I think that’s why it appeals to me so much 🙂 Within the long, sordid history of edtech, nothing interests me more than the particulars of the group I currently work with, UMW’s DTLT. When Martha, Andy, and Jerry tell stories of the past it’s like sitting around the dinner table hearing stories about my ancestors. Overblown simile, I know, but I can’t help it. I’m intrigued to no end of what came before me. The same is true when Brian Lamb starts getting on a roll about the history of learning objects in edtech during the early 2000s.

So, I was thrilled when more than a month ago Martha pointed me to the Coailition for Networked Information (CNI)  site which has a public archive of the original proposals from the nine institutions accepted into CNI’s 1997 proejct  “Assessing the Academic Networked Environment Project.” The project is described as follows:

Nine institutions are participating in CNI’s Assessing the Academic Networked Environment Project, which has been developed to field test measures of the impact of networks and networked information resources on higher education institutions.

I love the idea of exploring the impact of networks and networked information resources on educational institutons back in 1997—before email truly took hold at Mary Washington. I think this kind of project would be interesting to revisit. Not only anew, but for exploring where the nine schools that particpated in this project are twenty years later. I mean examing the history between 1997 and 2017 hen it comes to networks would be insane. How have networks impacted the learning landscape at UMW? Let me count the ways! 🙂

Below are some of the assessment questions this project was exploring:

First and foremost is the question of instuctional technologies. Exploring the impact of networks in regards to teaching and learning is a  concept that can be traced back to 1995 at Mary Washington College. What’s so awesome is that CNI both archived and made public the original proposals from those nine institutions, so I can get a sense of the narrative around instructional technology at Mary Washington circa 1996. Here is the archived page of UMW’s application to take part in Assessing the Academic Networked Environment Project. What’s wild to me is that you can see the kernel of what would become DTLT over the next two decades in this proposal. While talking about Mary Washington’s recent networking of the entire campus in 1994, and a major overhaul of technology in classrooms, etc, the proposal notes:

As the physical aspects of the project near completion, attention is more intensively turning toward how we plan to utilize the network and equipment to achieve our educational goals and objectives.
…..
To address the technological training needs of faculty, staff, and students, the College established a Center for Instructional Technology in 1995. In spite of its small staff, the Center works closely with other campus agencies and has accomplished several important objectives. First, the Center established a Faculty and Staff Technology Training Center in which faculty and staff receive training in state-of-the-art networking technologies as they apply to the teaching/learning process. Faculty are increasingly enhancing their curricula with technology so a forum for sharing these experiences was created. The CIT developed an annual three-dayFaculty Academy focusing on examinations of pedagogy and technology as a method of facilitating communication regarding these experiences.

Isn’t that crazy? The long history of DTLT can be dated back to 1995 in this proposal, and I think the constant investment in developing faculty in “state-of-the-art networking technologies as they apply to the teaching/learning process” has remained a consistent focus for what we do. The fact that over the last twenty years there has been so much expertise in this field that’s played a crucial role in the work we’re doing today is humbling. This wouldn’t have been possible if there wasn’t an early belief as the web was emerging into public consciousness that these technologies wouldn’t dramtically change how we share what it is we do. People often ask what’s in the water at UMW when it comes to all things edtech, and it’s increasingly apparent that that questions wouldn’t even be asked if those waters weren’t so deep. An early understanding that investing in instuctional technology as a means of understanding networks as the technological infrastructure premised on conencting the work of people was defining for the course we’ve been on since 1995. As we open up yet another era of DTLT’s illustrious hsitory whenw e move into the Convergence Center next moth, it’s cool to think about how many folks over the last 19 years got us there.

This entry was posted in dtlt and tagged cni, dtlt, featured, network, news. Bookmark the permalink.

4 Responses to A Networked History of UMW’s DTLT