Alta Via Day 2 Or, Break on Through to the Other Side

I wrote this post on August 6th, the evening following an epic second day of our hike through the Dolemites. You can read the post about day 1 here,  which was actually published in a timely fashion. I was able to write three of the four posts while still hiking, but they sat in my draft queue given a lack of any real photo organization skills (not to mention uploading them from the trail which was increasingly harder the higher and further we climbed). The second day had us hiking from Val di Funes over the forcella Pana to Val Gardena, in fact the Alta Via hikes through the Dolemites are just that, climbing up and down mountain passes from valley to valley, and the vistas such effort affords you are simply stunning! I promised myself I would get these posts out before year’s end, so this is my last ditch effort. [Finally published on December 29, 2019.]

The morning of day 2 we got what Europeans call “breakfast” at 7 AM and then hit the road at 7:30 or so. The morning was ominous with a fog as thick as John Carpenter’s film. 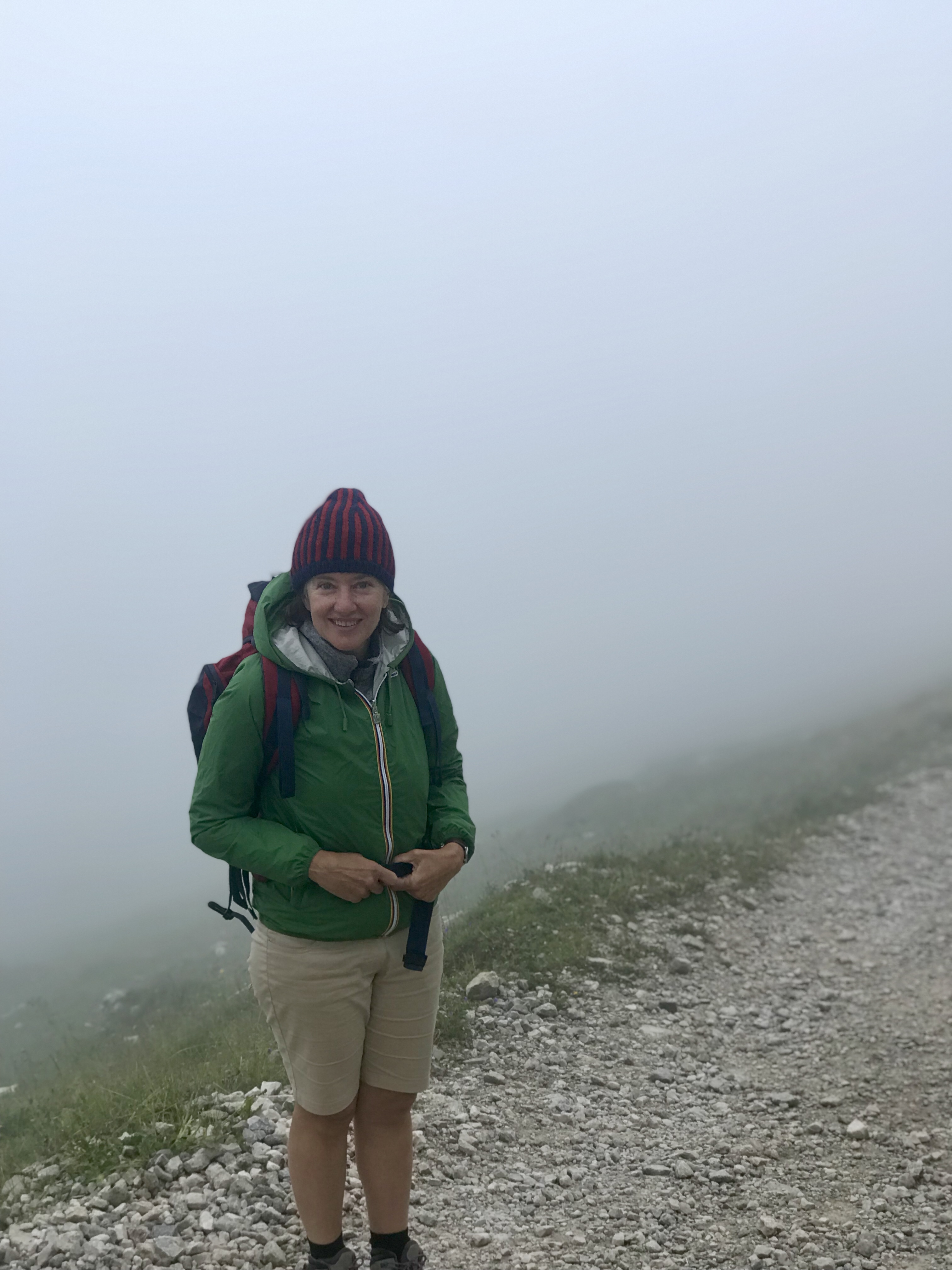 But luckily we got to watch it quickly burn off and there were nothing but cows. 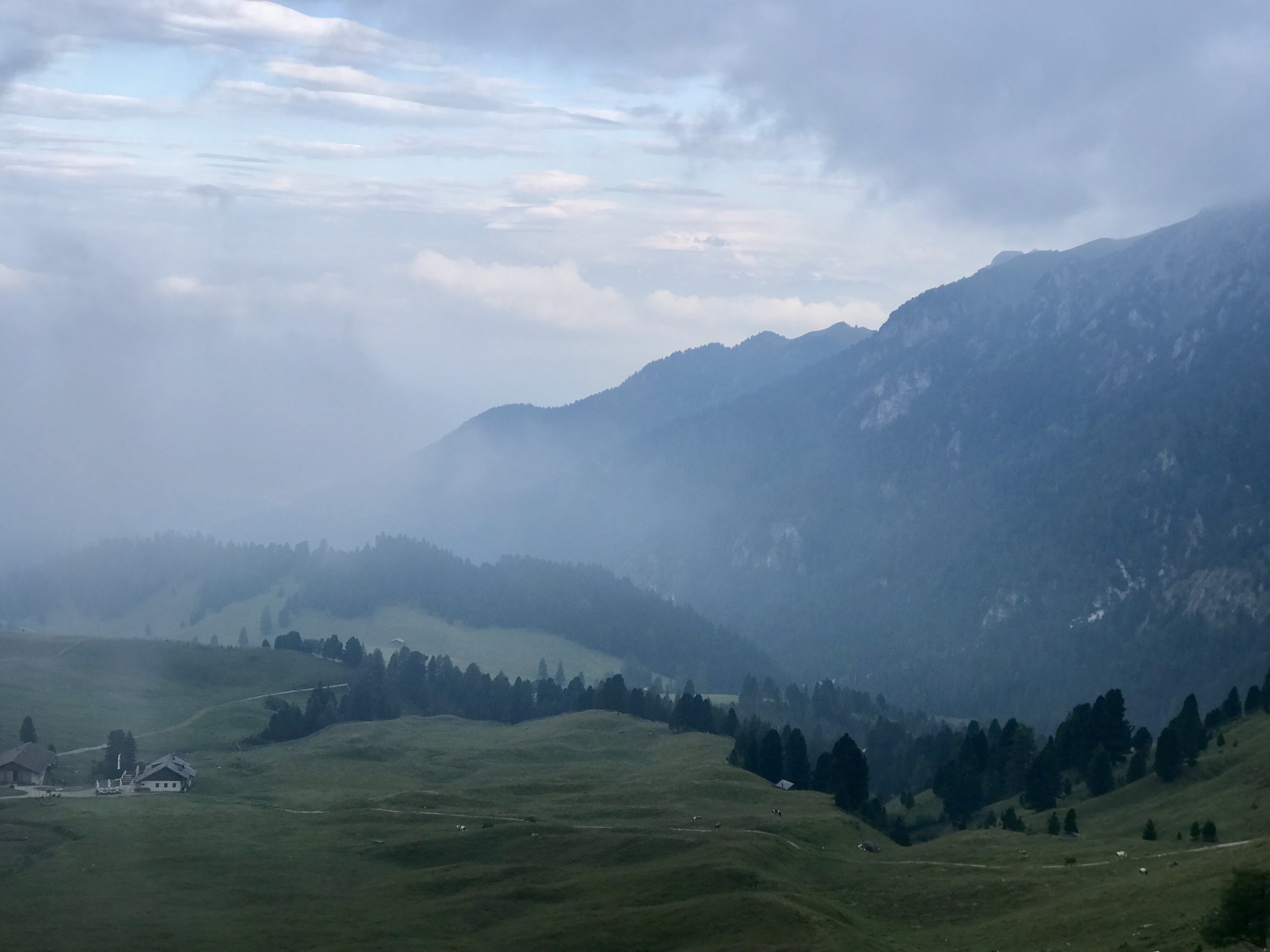 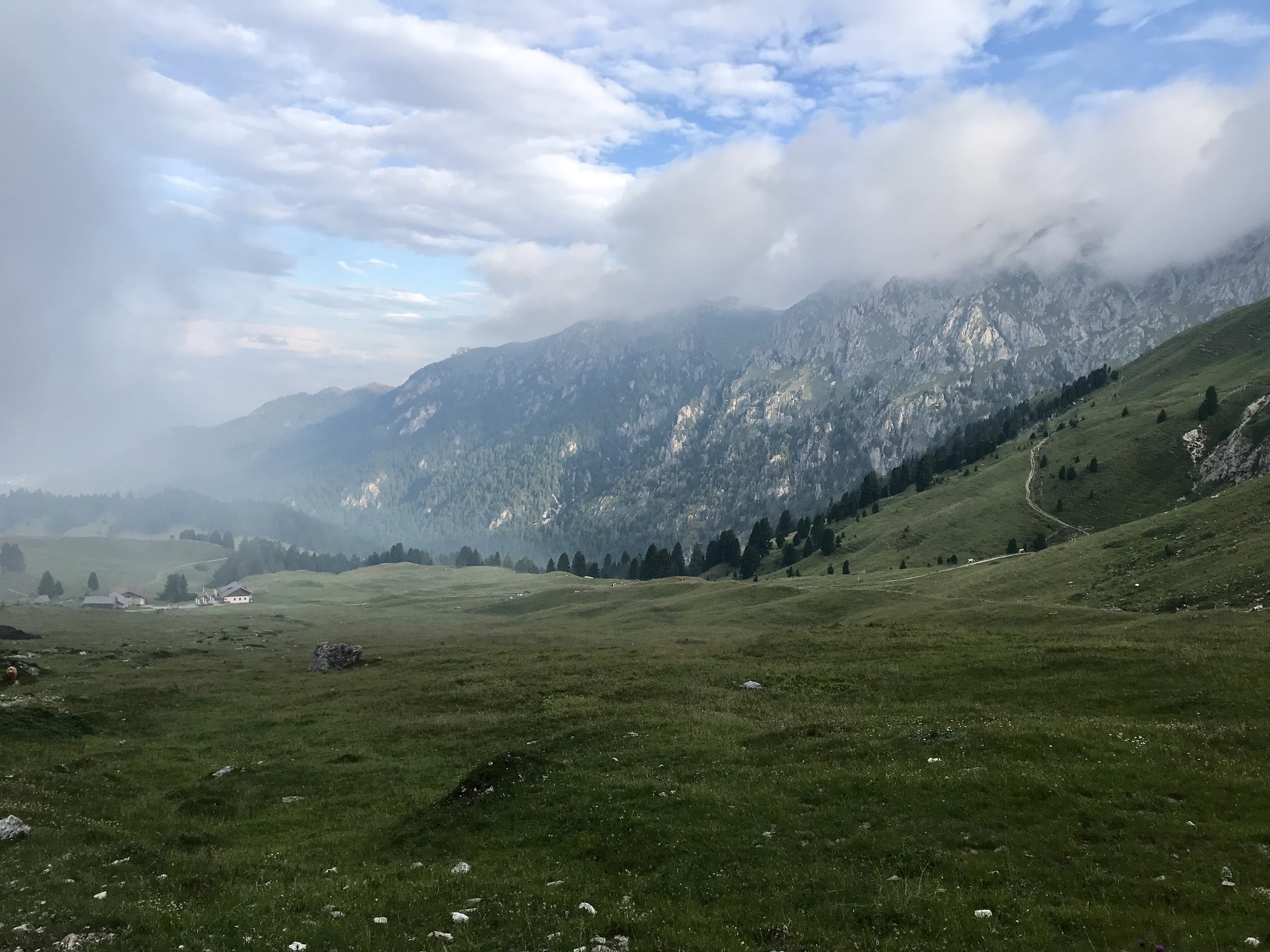 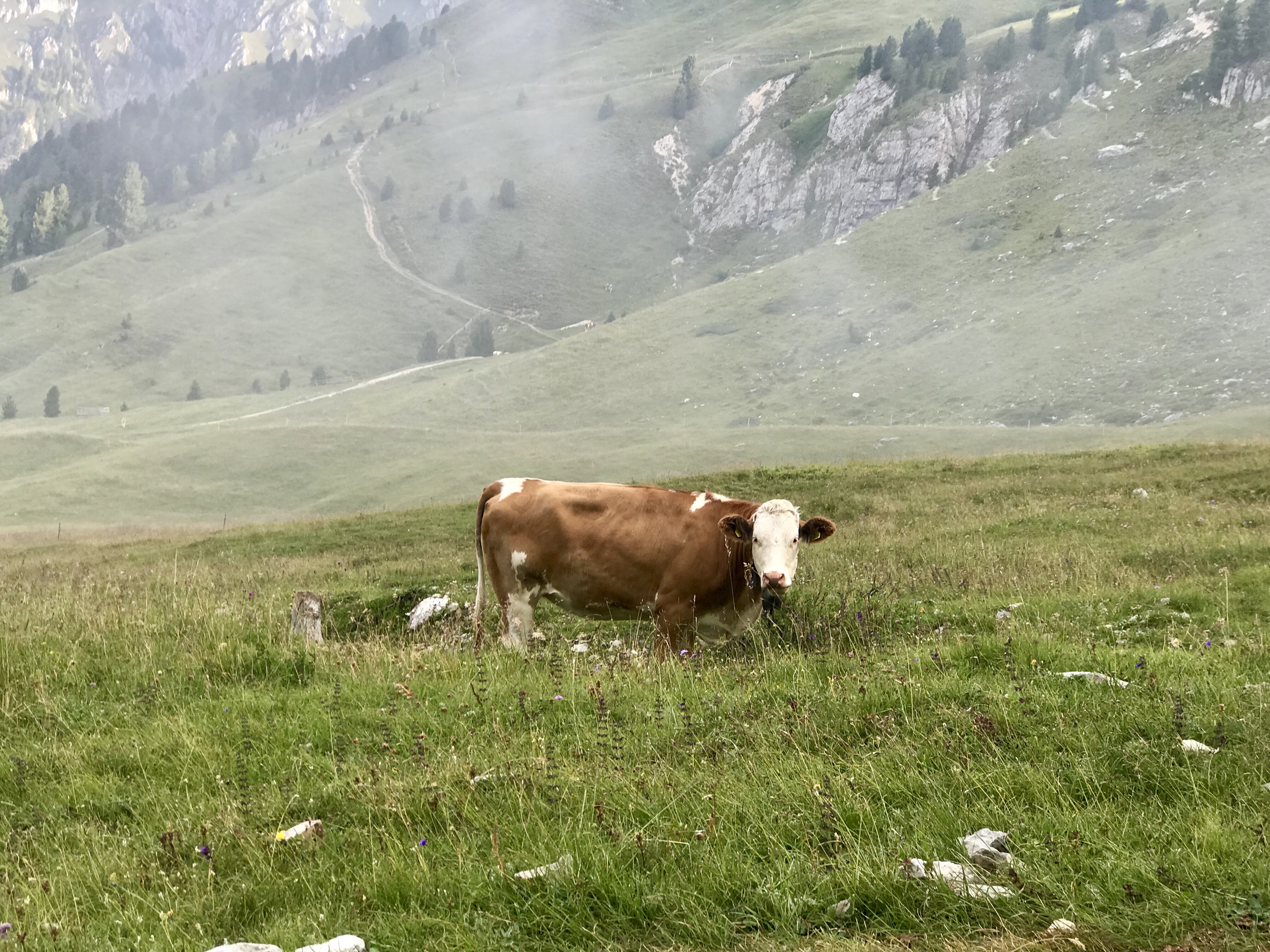 The next few hours were gloriously familiar territory, we were back in Val di Funes! This has become one of my favorite places in the world, and the pictures say it all: 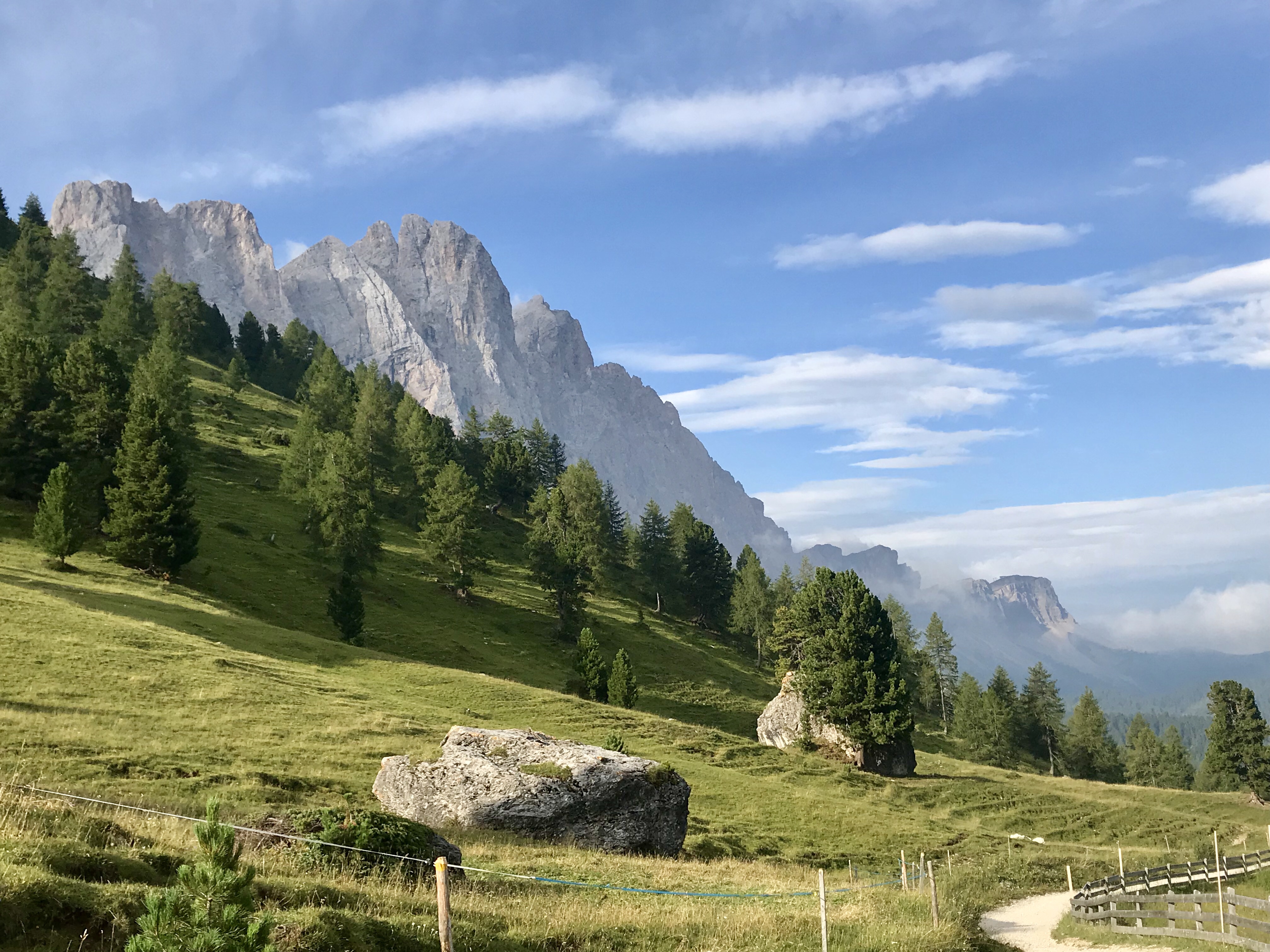 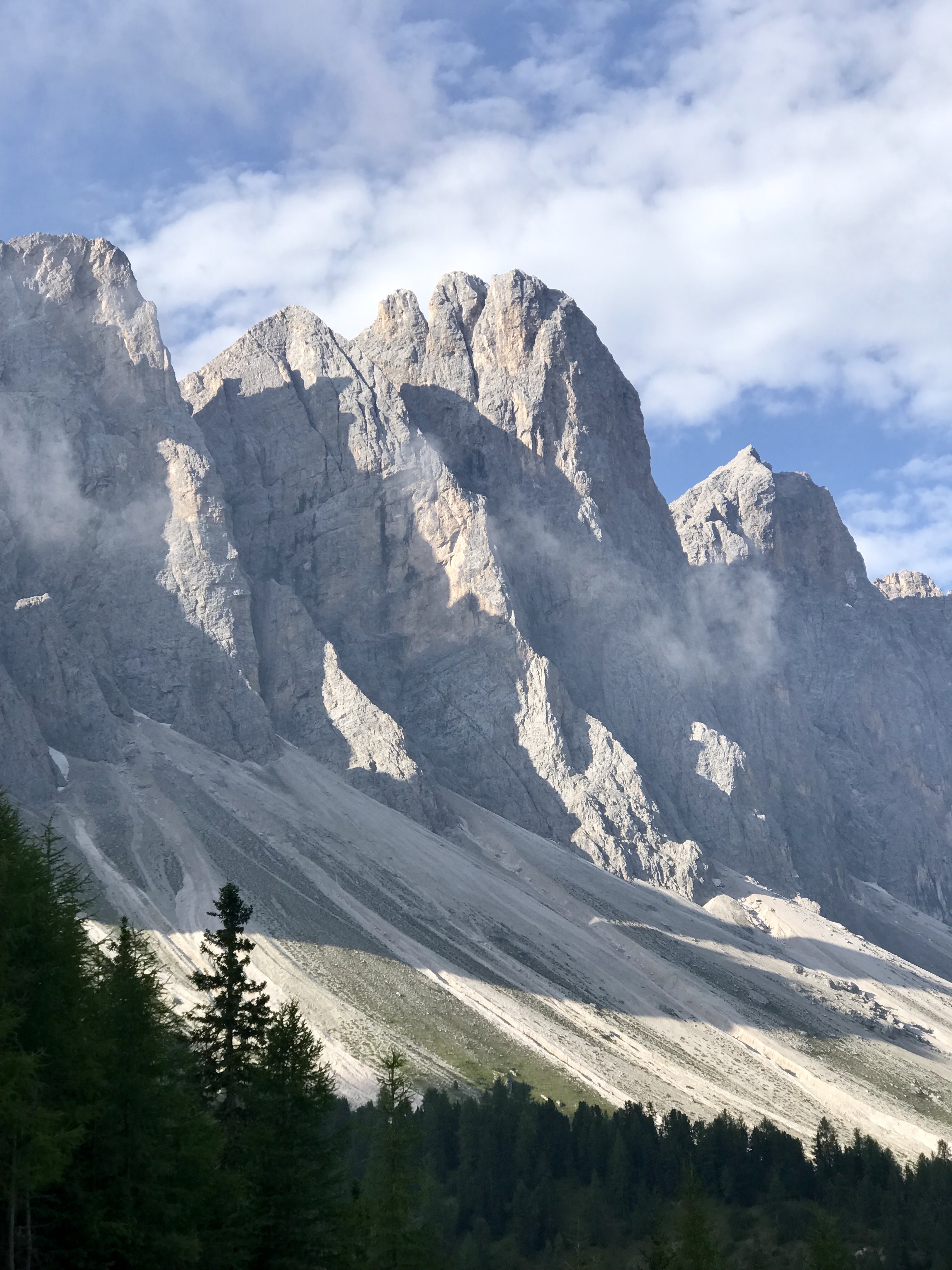 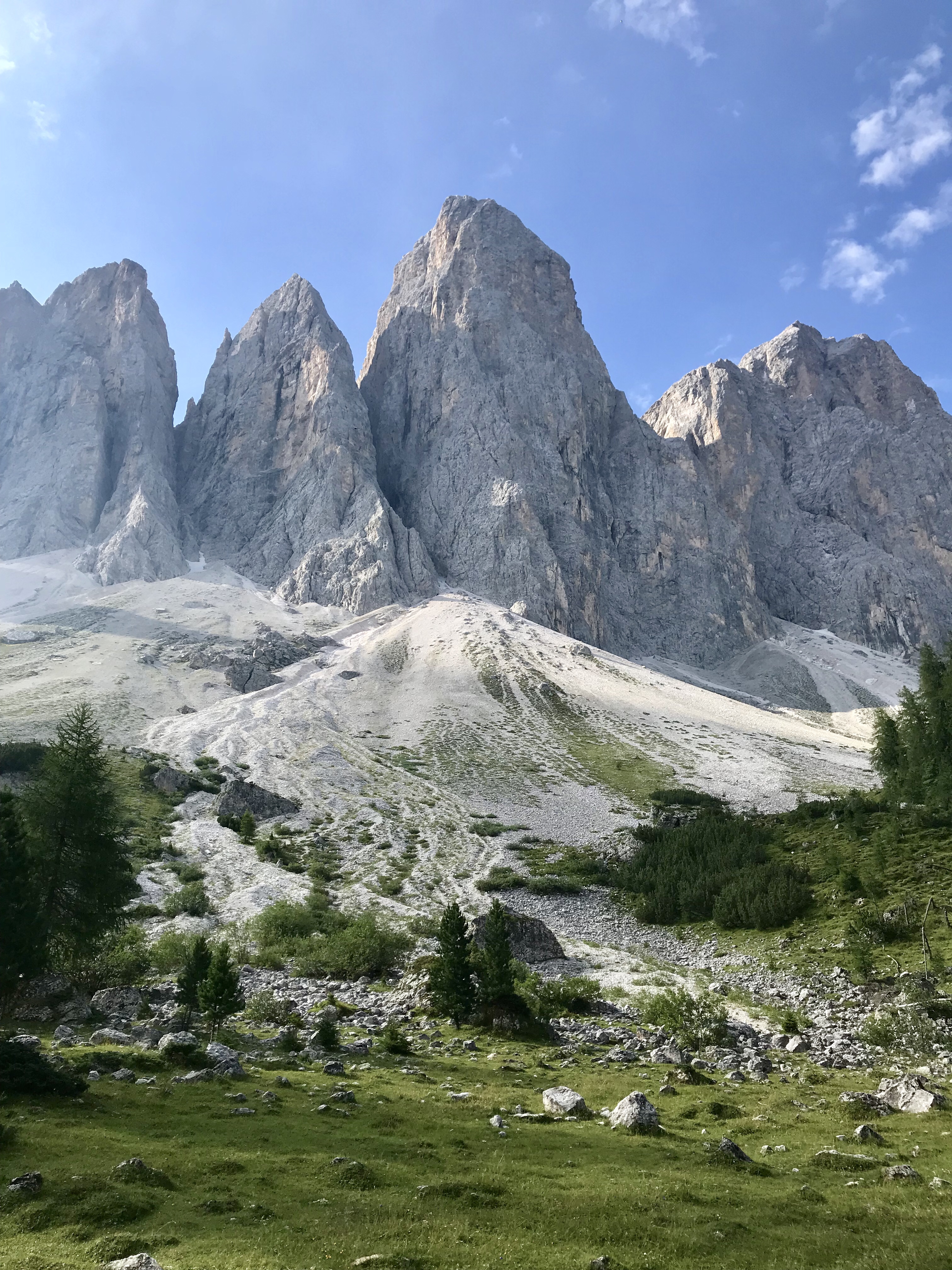 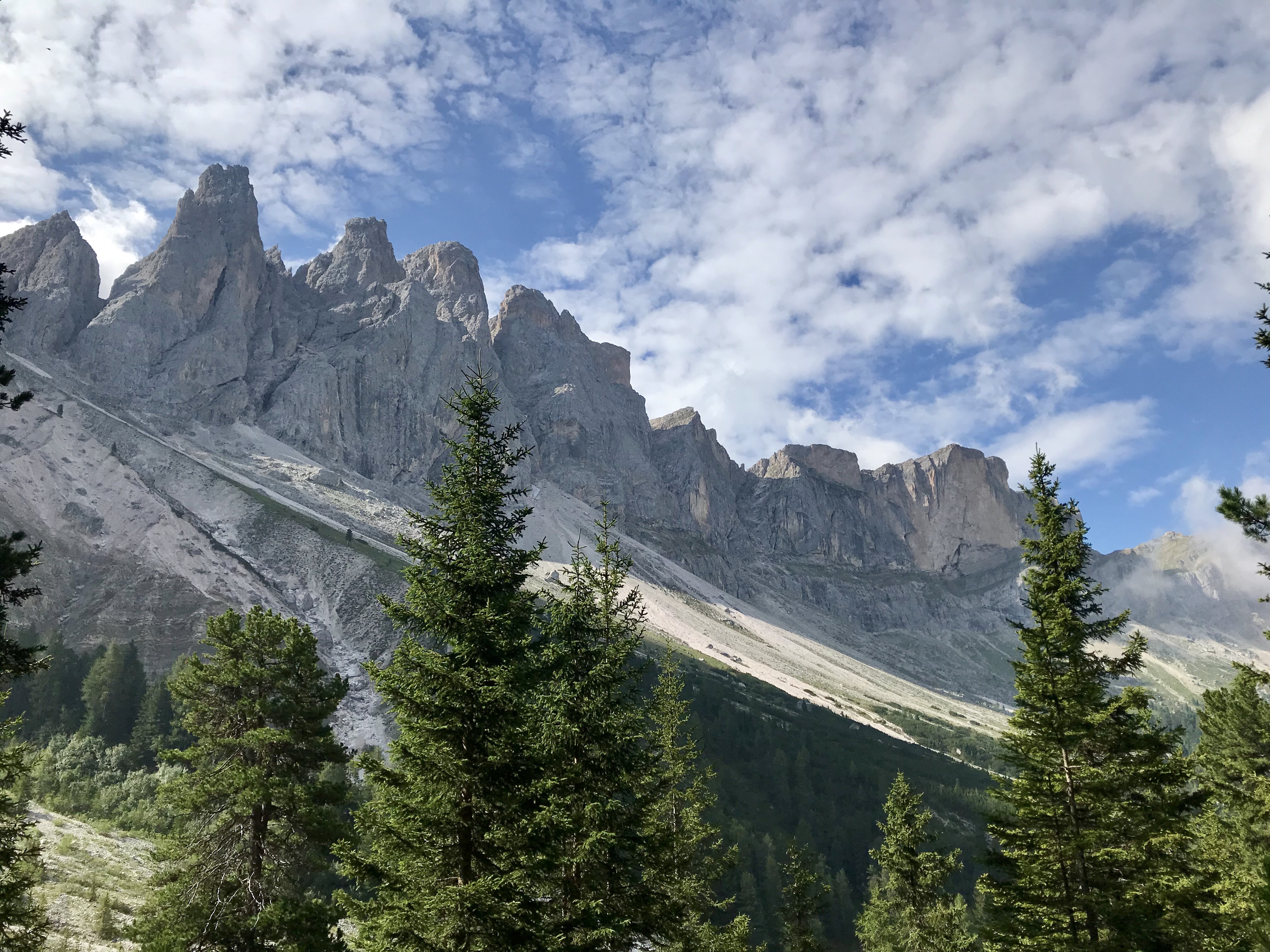 I love this place cause it makes photo hacks like me feel accomplished. The Odle group of Dolemites may be the most photogenic mountains on Earth (this assertion based on my limited experience, as most things on this blog are). We actually left the Alta Via almost immediately that day and took trail (in German weg) number 35 which brought us down from 2300 meters to 1900 meters in order to do the Adolf Munkel Weg. This is where I parodied Oasis to sing “You’re My Wander Weg!” to Antonella’s growing chagrin. The views of the Odle through the forest are stunning, but we would pay for all this joy.

After about two and a half hours of hiking through the woody wander weg we needed to get over the Odle and into Val Gardena, which meant hiking over the mountain, which meant about 1500 feet/500 meters of climb, which meant fear and loathing. Though, truth be told, while it was rough it was not nearly as bad as the ascent the day before. Part of the reason may be they had built an impressive stairway for the steepest part (see video below for an Ariel view), but we also did this hike much earlier in the day which may have made a difference with my exhaustion level. But there is also the fact some days you just feel better than others.

We made it up to Forcella Pana by noon, meaning we had already clocked 4 hours on the trail. The following images track the path from the woods up 500 meters to Forcella Pana, and the video of the workers building a stairway to heaven is fascinating. 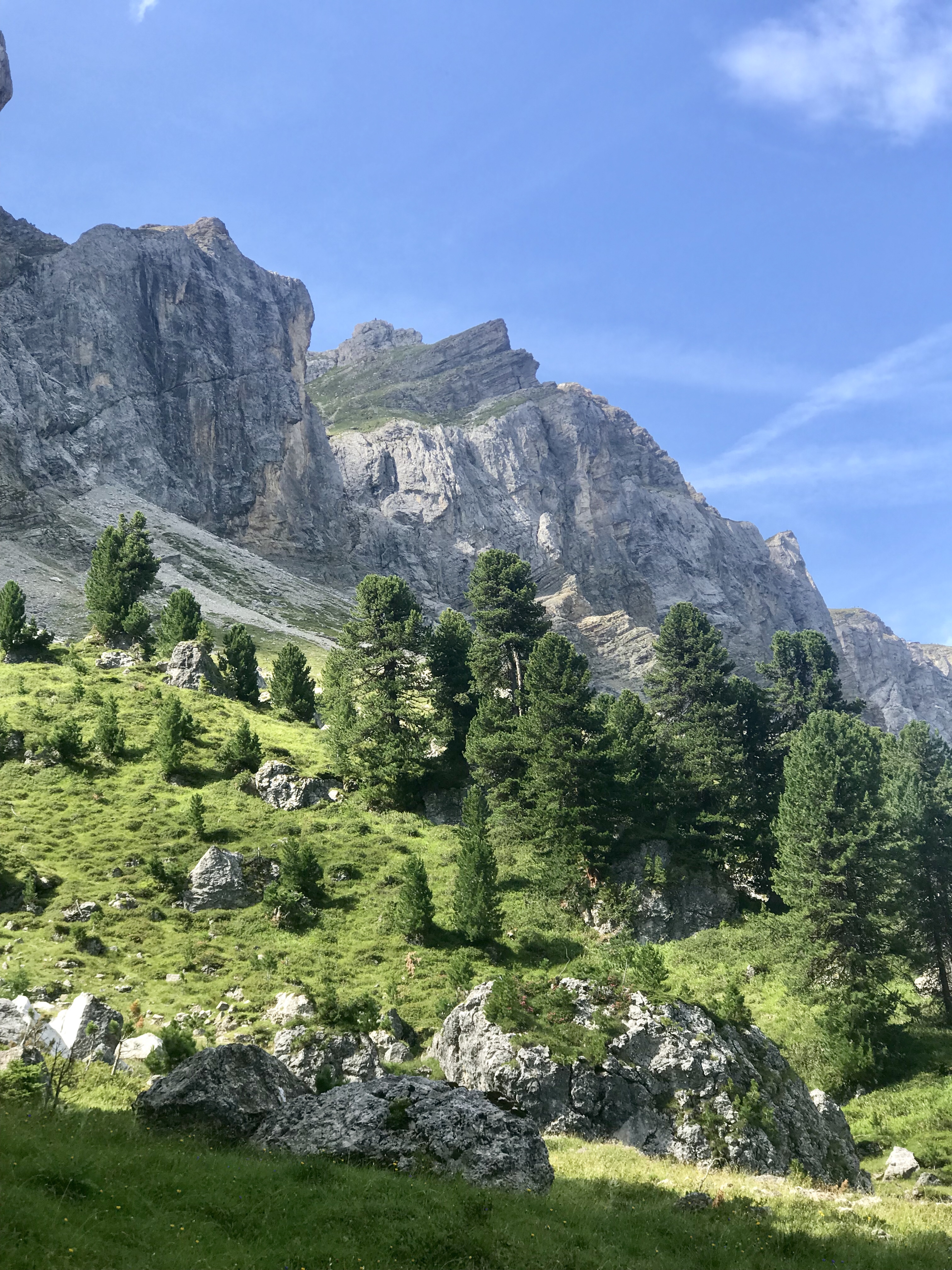 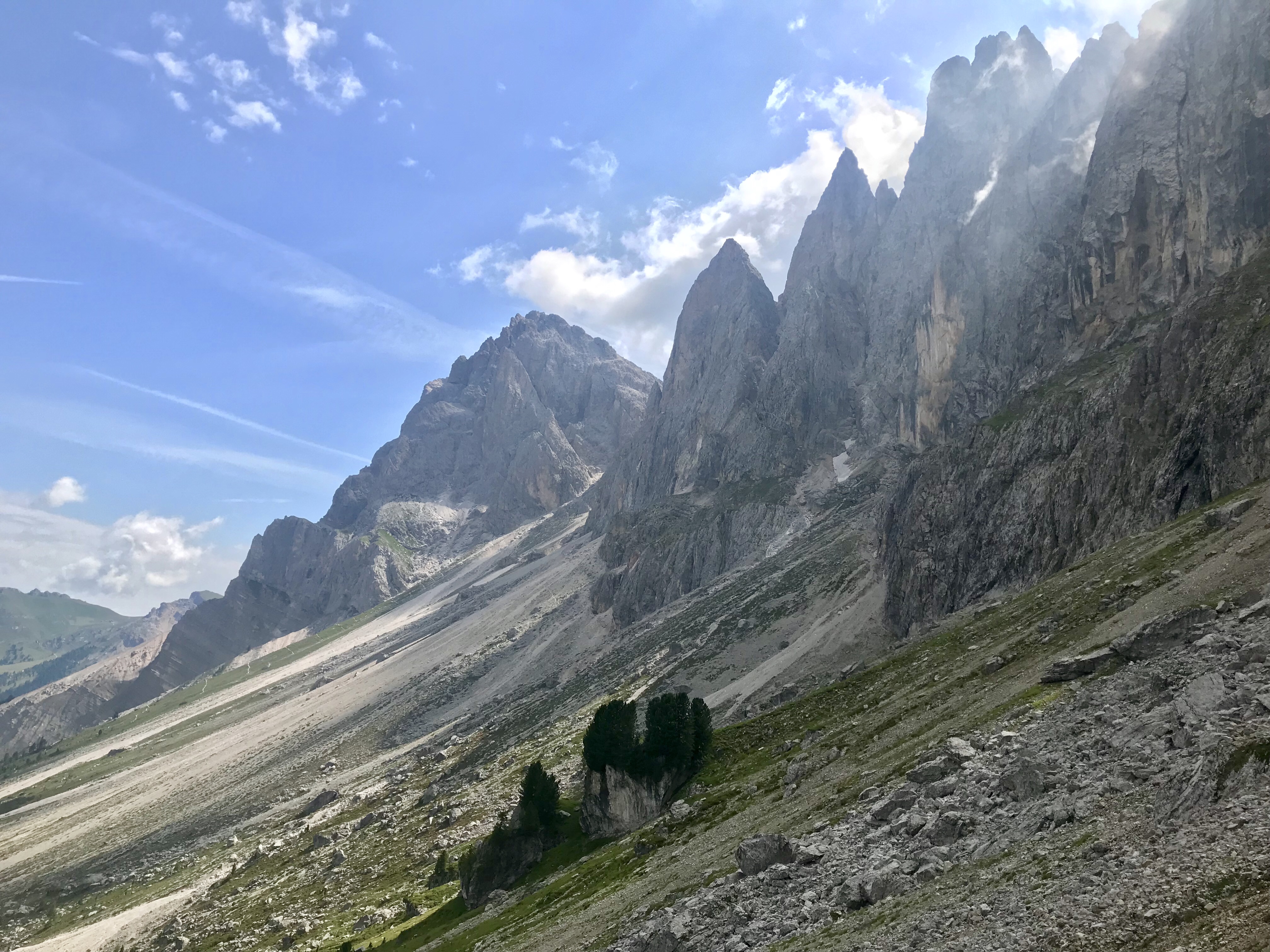 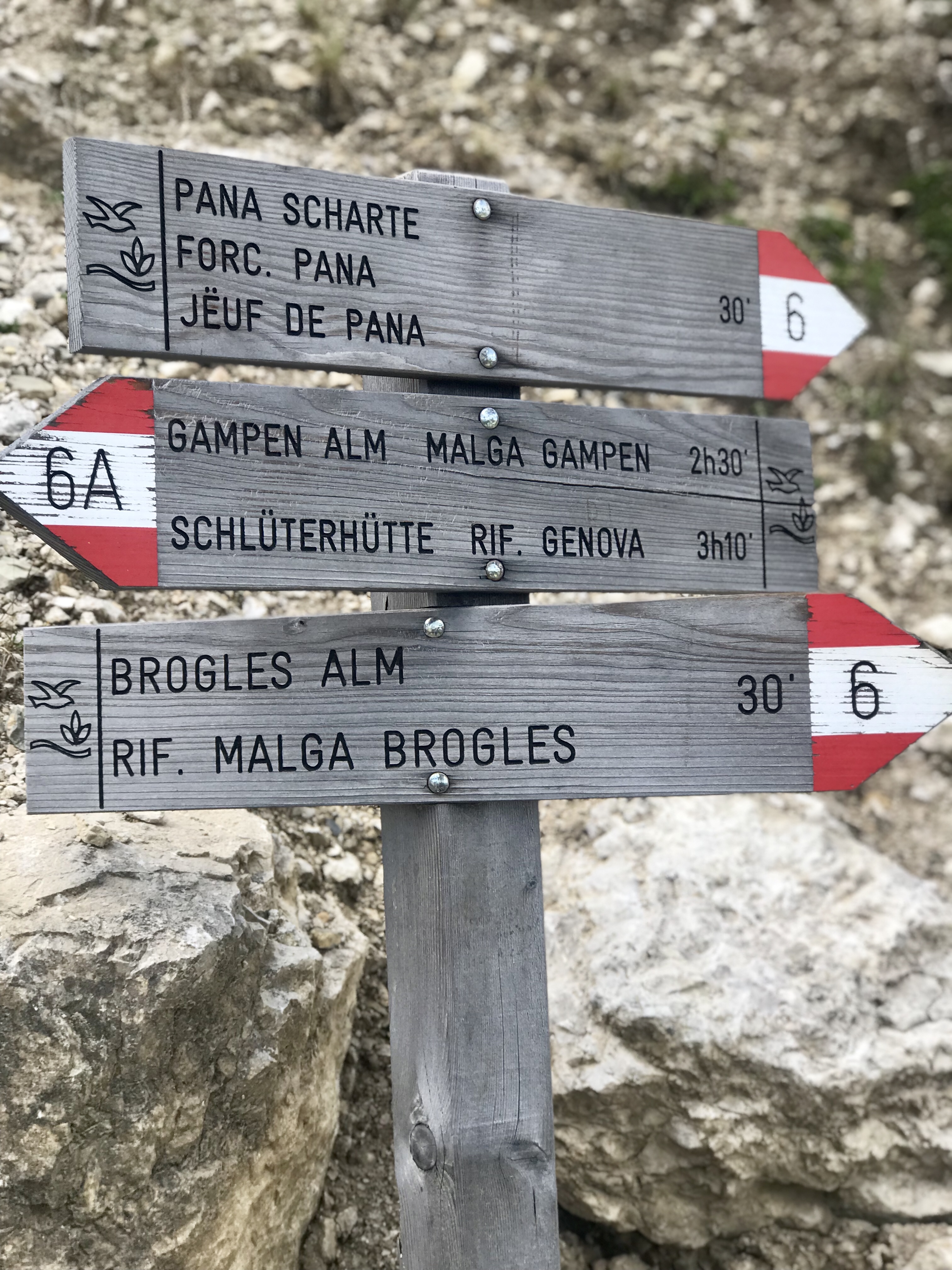 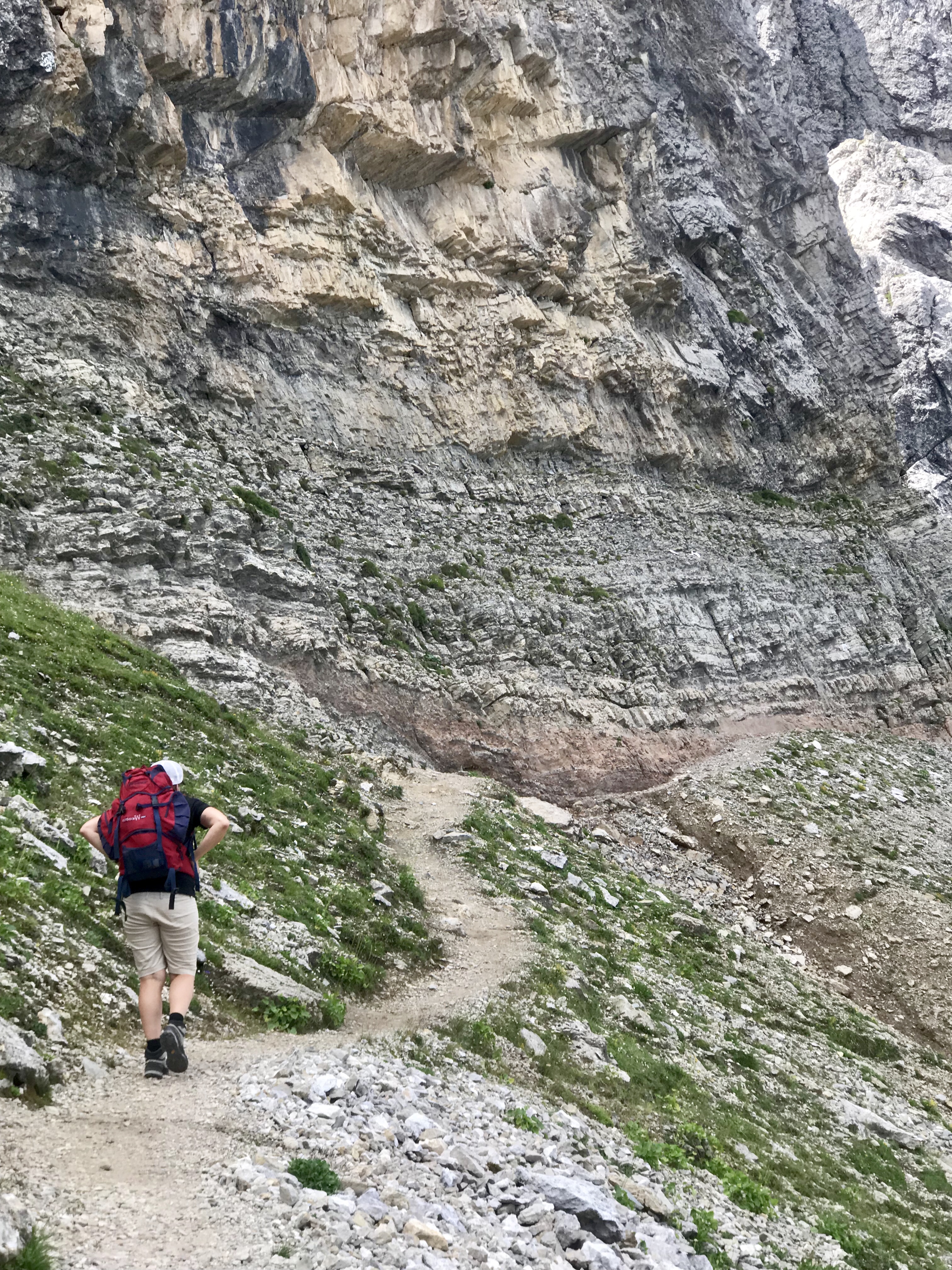 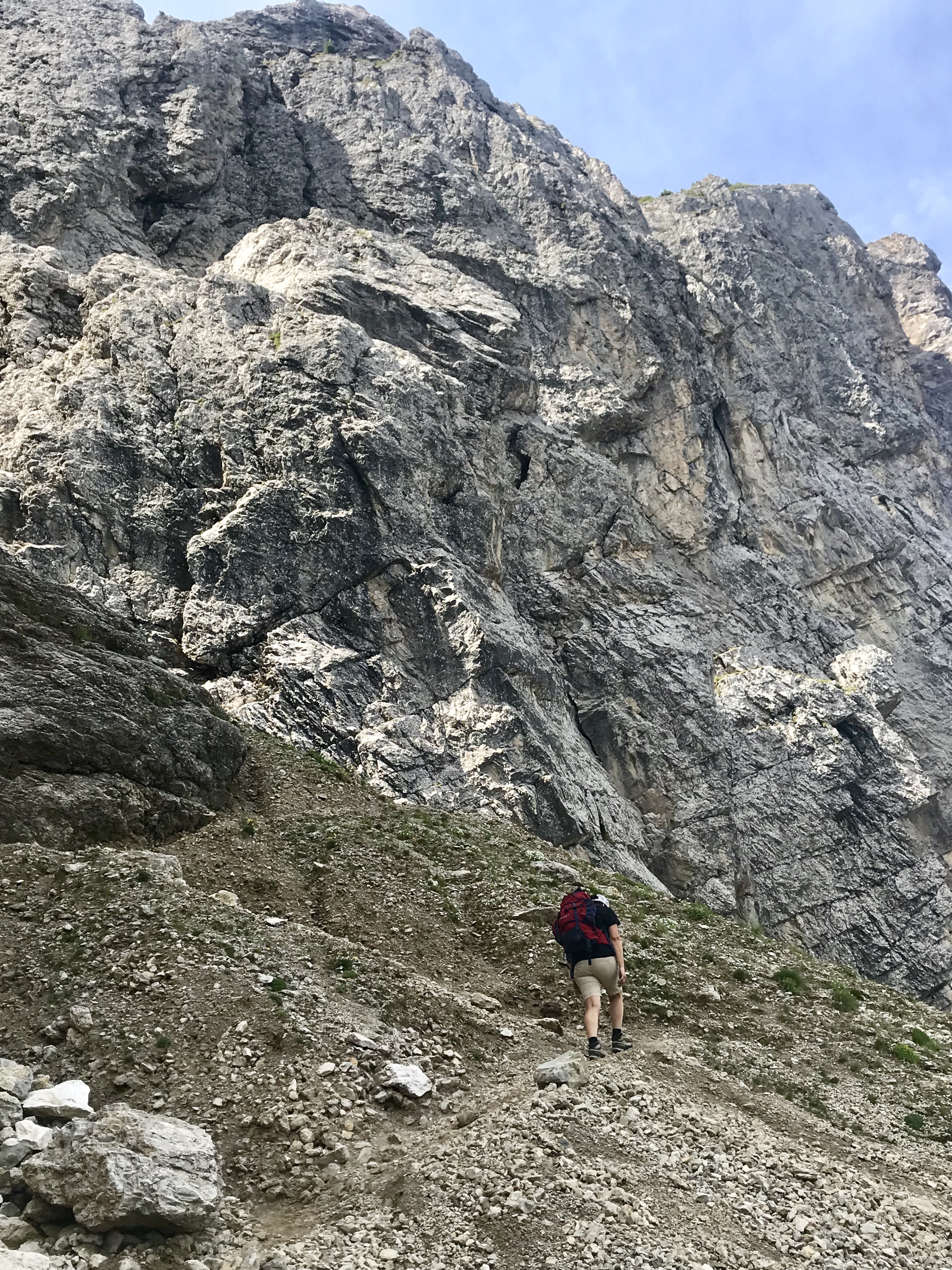 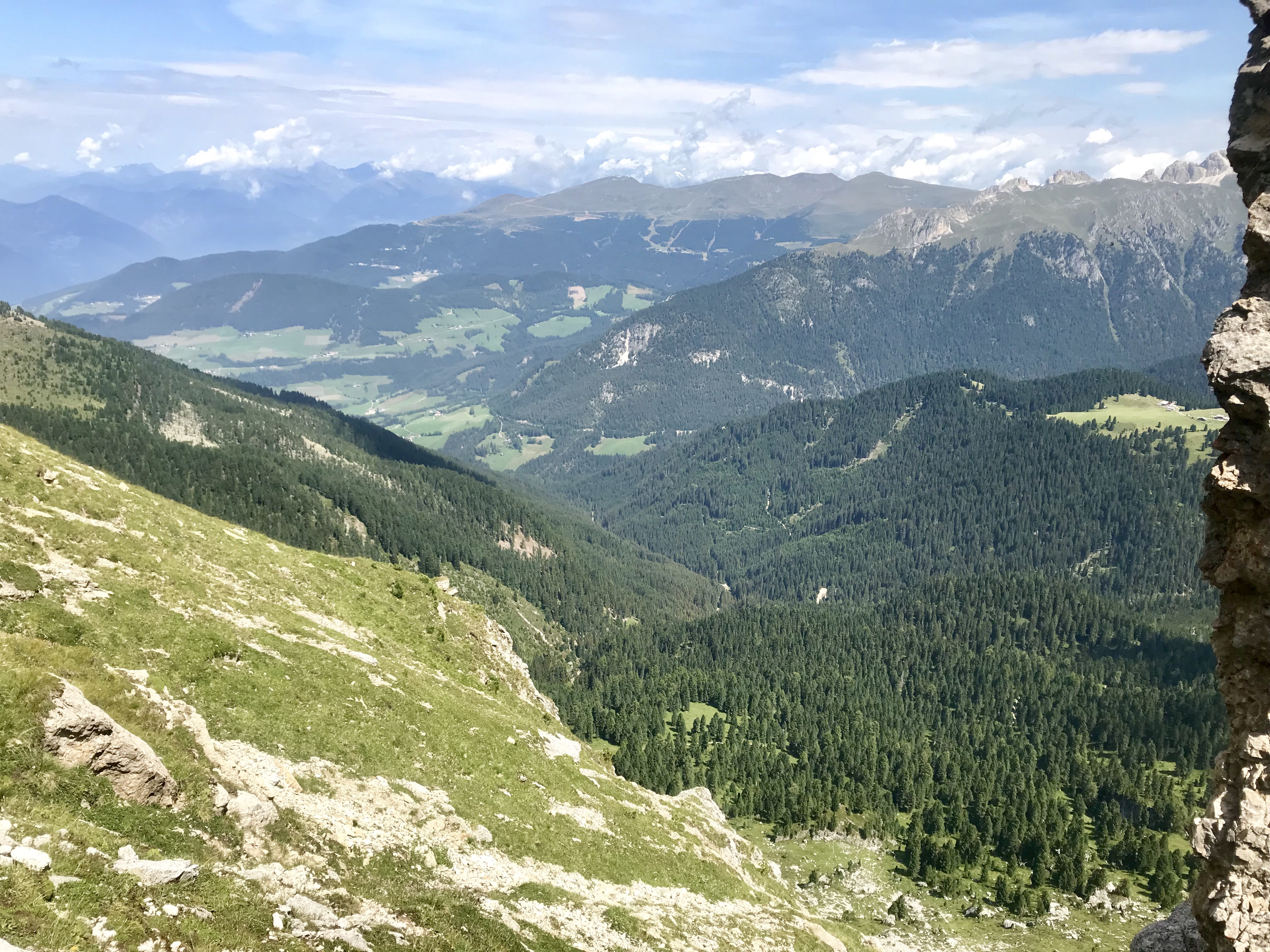 Once we reached the top of Forcella Pana Val Gardena opened up like something out of a fairy tale. It was awesome! 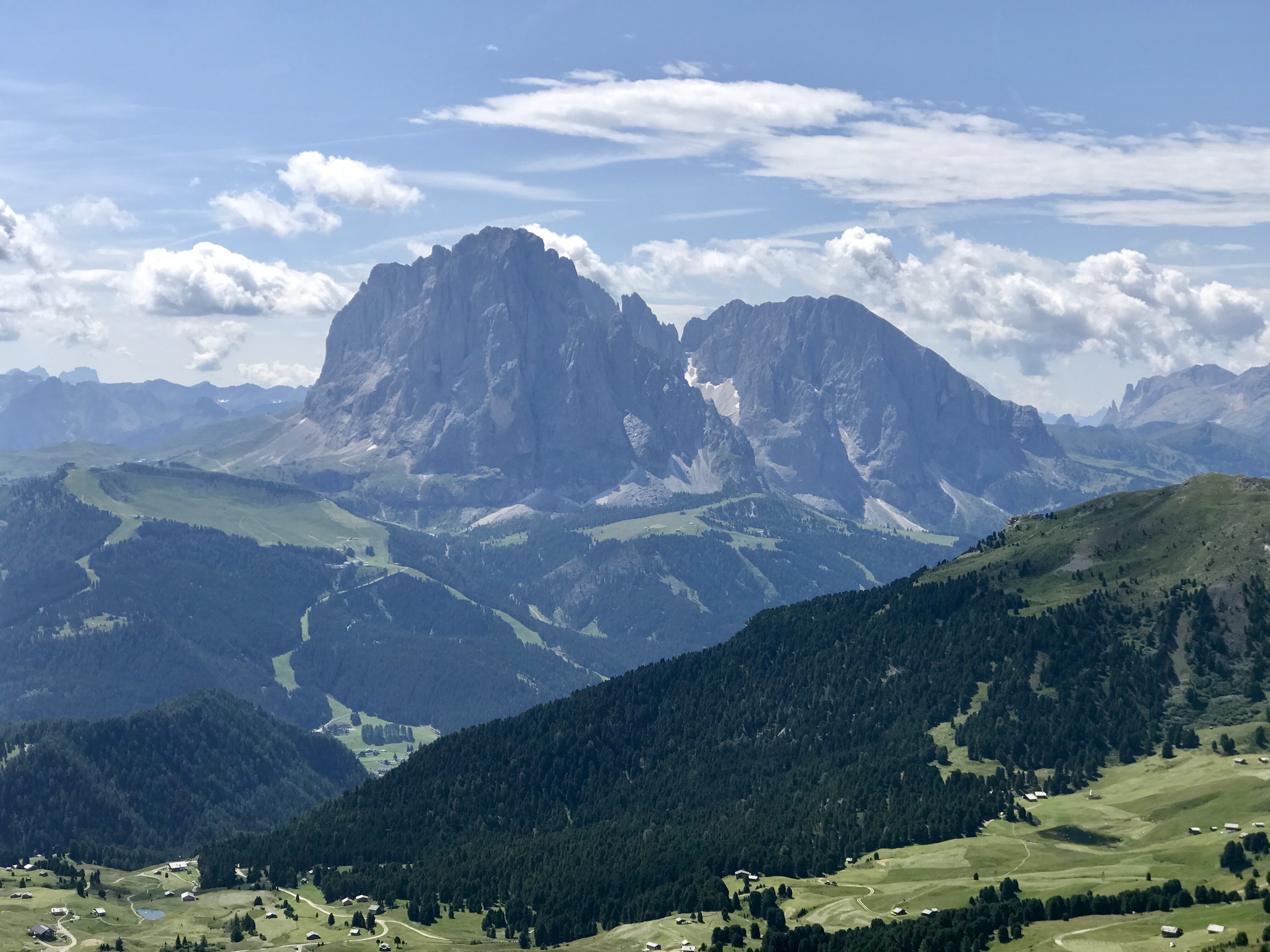 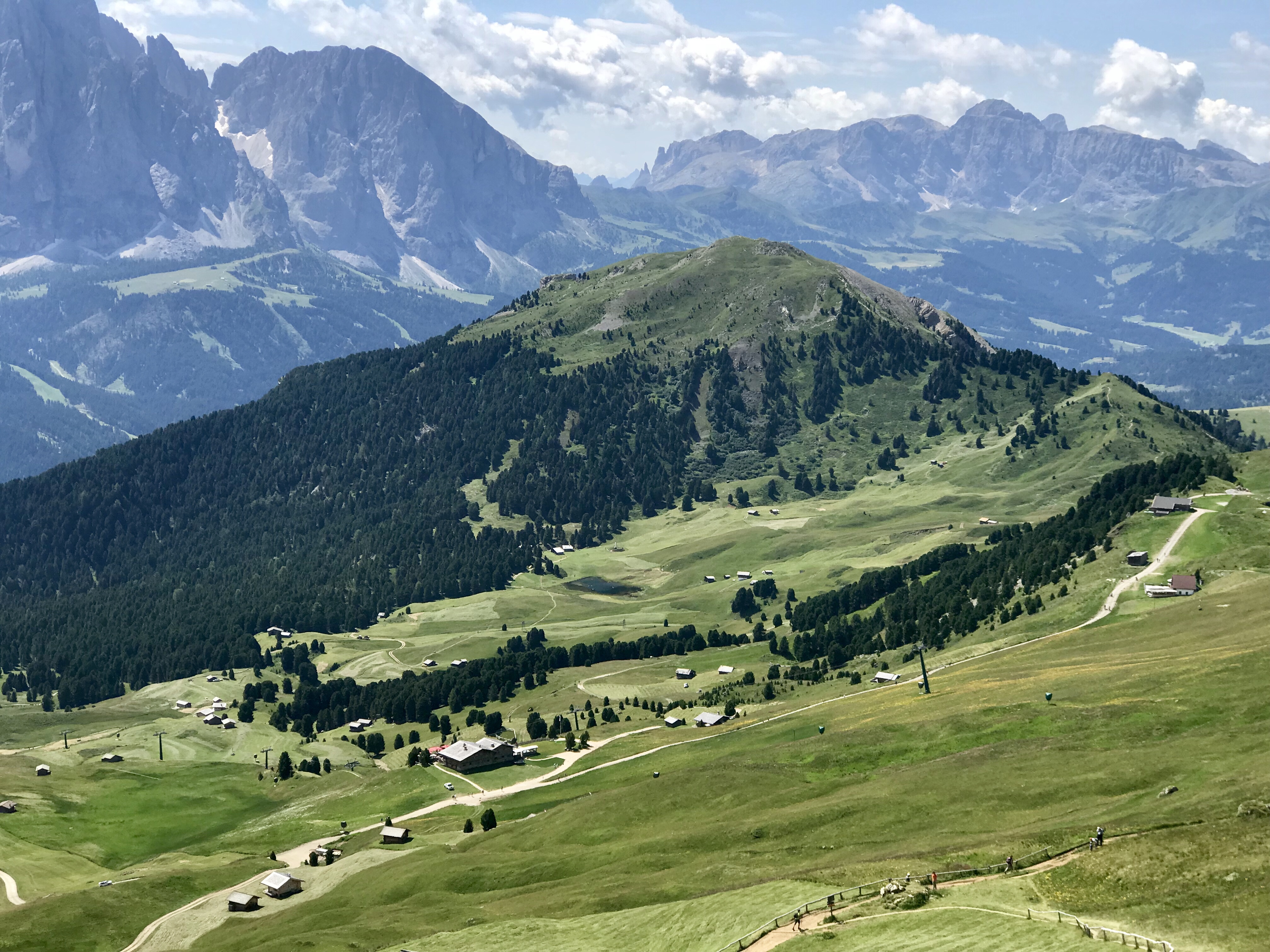 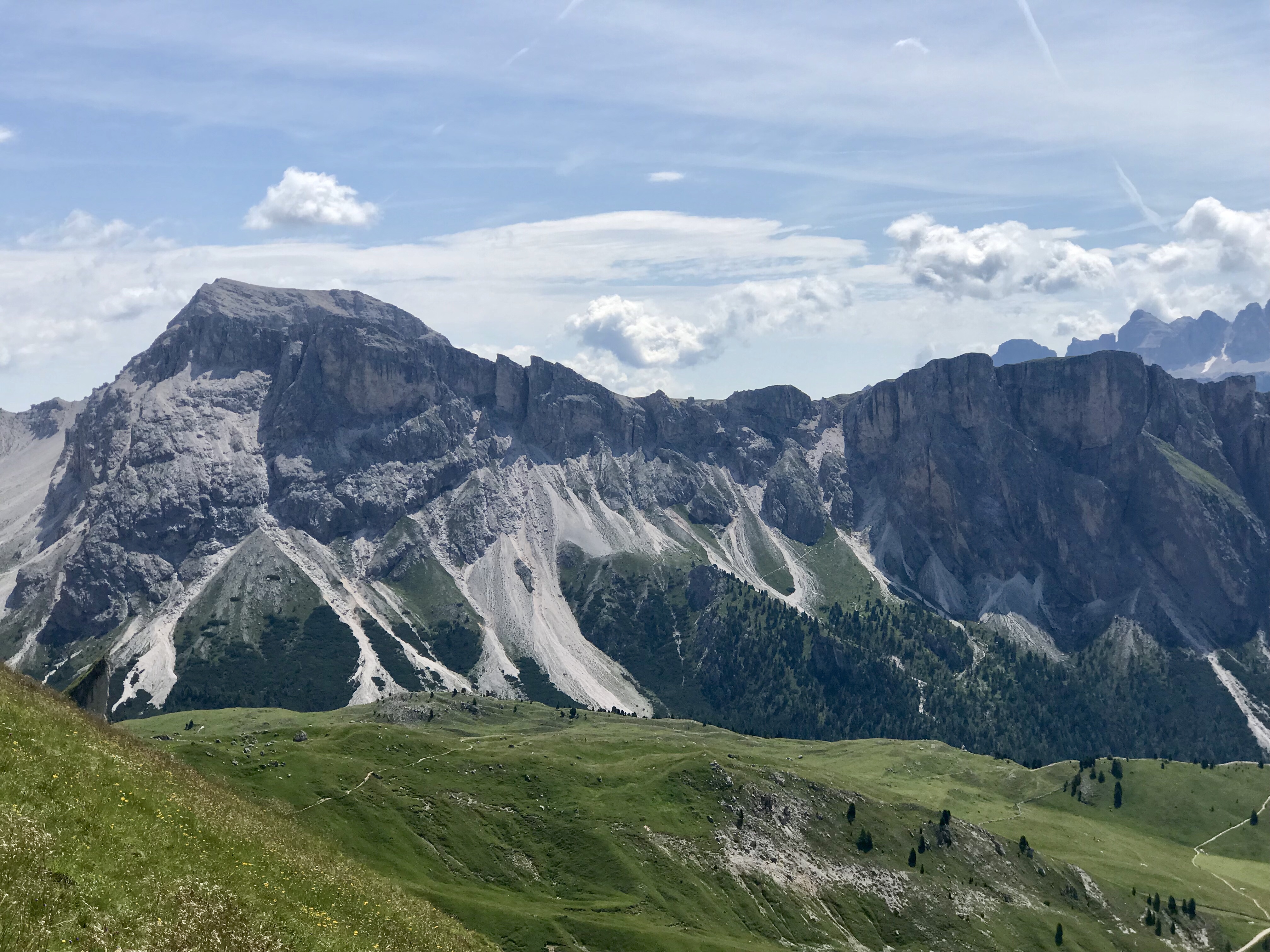 We walked down and had a delicious, leisurely lunch at baita Daniel, and then hiked another hour to Rifugio Firenze. We were on the other side of the Odle group of Dolemites and now looking forward to exploring brave new vistas! 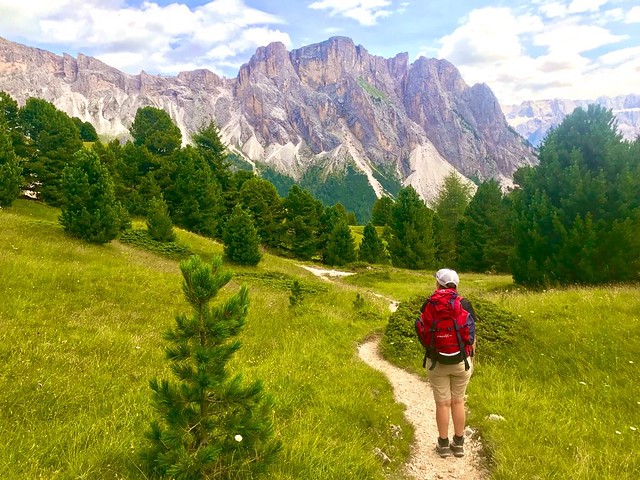 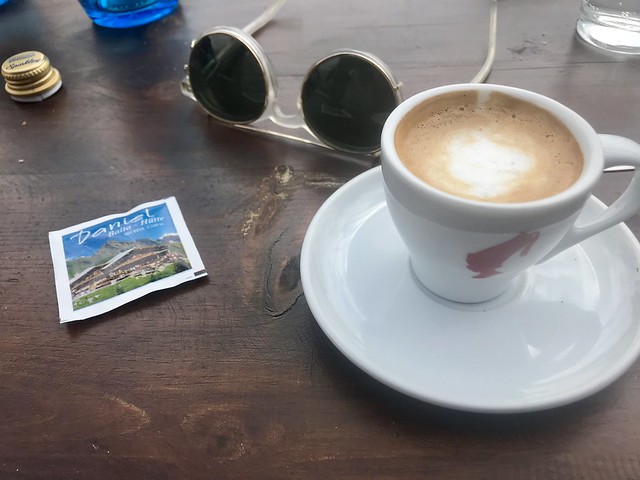 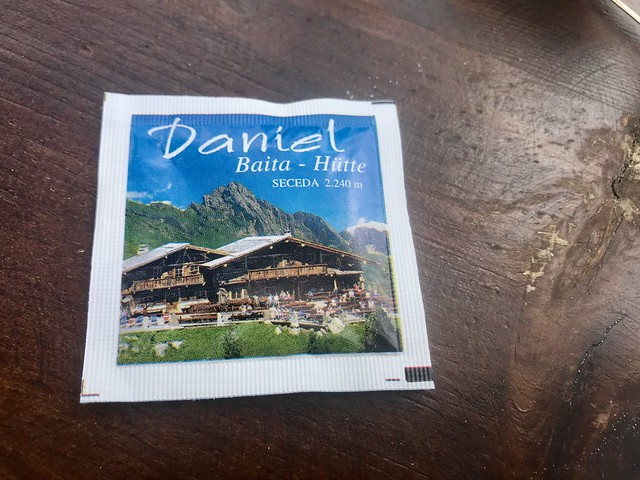 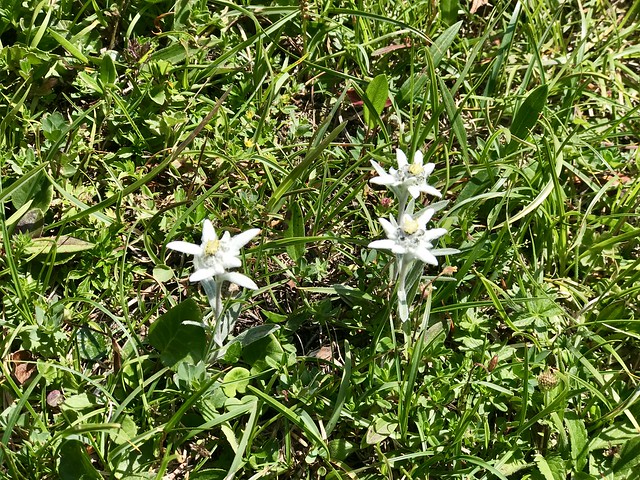 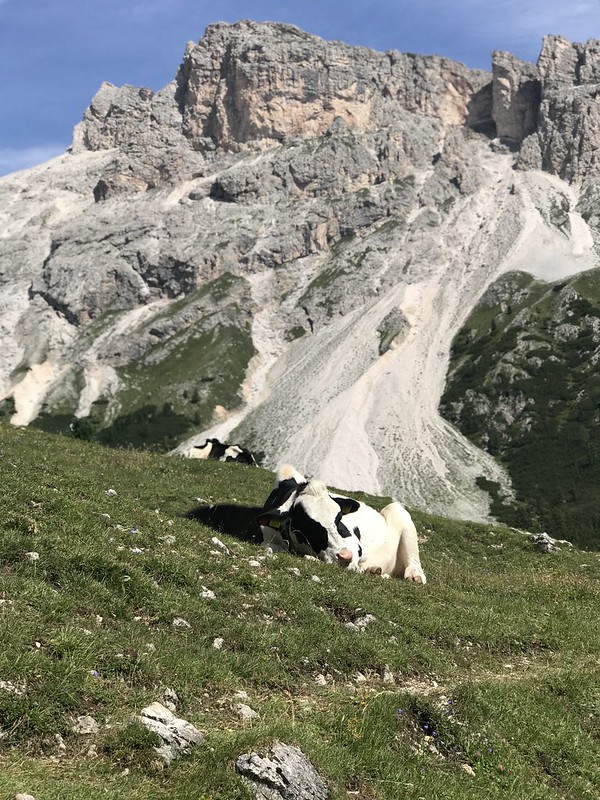 This entry was posted in fun, hiking, Reclaim Italy, travel and tagged Alta Via 2, Dolemitie, Hiking. Bookmark the permalink.