Contemporary Etymologies: A Closer look at the Linguistic Derivation of the Internet Pipes

Given all the attention surrounding Yahoo Pipes, I took it upon myself to do a little research into the contemporary etymology of this idiomatic terminology for the internets. Now, regardless of whether you understand the internet as a series of pipes or tubes -both have one thing in common: plumbing. And, lo and behold, I found an early manuscript dating back to the mid-1980s that begins to shed some light on this fascinating linguistic marriage of the age-old water conduit and the relatively recent phenomenon of streaming, particularized data. 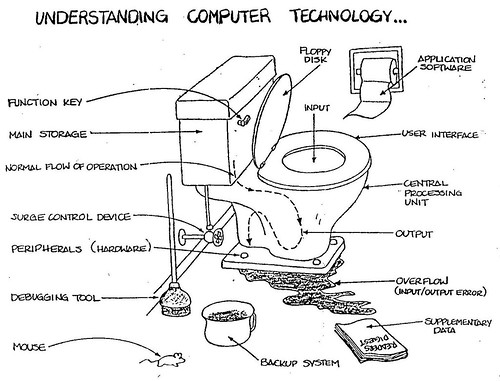 While pockets of humanity began to be placed in corporate cubicles, this process of alienation was further exacerbated by the arrival of inanimate boxes made of wires, circuits, and cords. These strange objects came with their own foreign language that forced this newly formed cubicle culture to quickly adopt an entirely new vocabulary. In order to make sense of these rapid changes, they drew upon more quotidian metaphors to make these outlandish machines seem more familiar. In fact, the image reproduced above is from a cubicle circa 1985 -clearly suggesting that as computers became increasingly more common in the workplace, a process of metaphorical translation from the unknown to the grossly familiar was already well underway.

Interestingly enough, one of the earliest instances of these vernacular re-naming rituals focuses upon the relationship between a computer and household plumbing. I would argue that such a discovery may help shed some light on the linguistic roots of our culture’s current dependence upon the plumbing metaphor to define and articulate the inner-workings of the vast, de-centralized network of computers that are talking to one another round the clock.

In an effort to raise awareness of these linguistic links, I would ask each of you to click on the image above and print out the high-resolution version. Then hang it up in your cubicle, thinking of it not only as legend for the struggles of the recent past -but also as a map for the future of the brave new world of the wide, wide web. Grounding our current conversations in a commonly accepted and sanitary vision for the future, is the key to coming to terms with that history that both defines and liberates us all.

This entry was posted in Uncategorized and tagged general. Bookmark the permalink.

4 Responses to Contemporary Etymologies: A Closer look at the Linguistic Derivation of the Internet Pipes