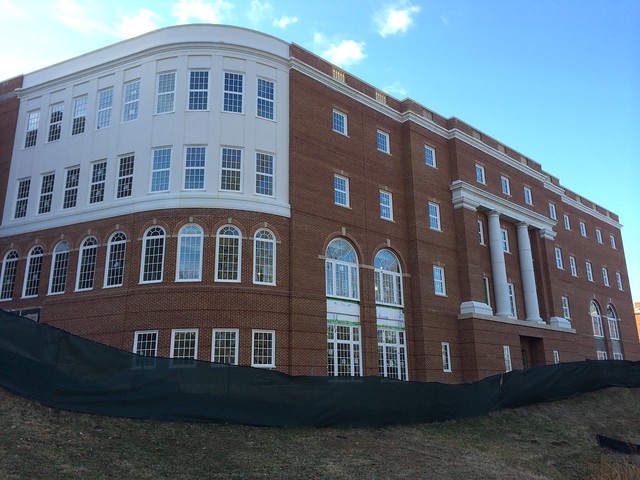 Yesterday I took a tour of the nearly completed Information Technology Convergence Center (a.k.a, ITCC and the Convergence Center). The building will be opening mid-Summer, which is hard to believe. I’ve been at UMW long enough now that I can say “I remember almost eight years ago when that building was just a twinkle in Chip German’s eye.” Well, the vision has been poured into concrete, and in two short months DTLT will be moving into our new digs in a pretty amazing building that will have an editing lab, production studio, a cyclorama, an incubator classroom, an active learning classroom, a digital auditorium, a digital knowledge center?, a media wall, a digital archiving lab, and much, much more. 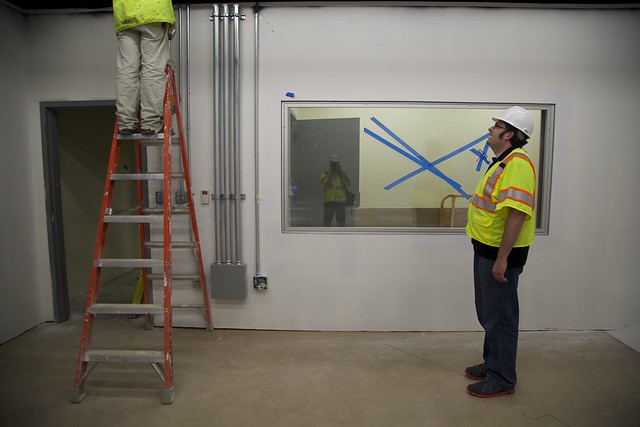 In other words, we’re heading into a state of the art physical hub for all things digital. The move will bring our group into a building that will share space with the Department of Information Technology, the Writing Center, the Speaking Center, as well as the library. Convergence, indeed. Various faculty and student support outfits will be aligned within a uniquely futuristic space unlike any other on any campus I’ve yet to see. And it will be centered around the main floor which features be a large, open space with a two story media wall, various collaboration areas, lounge seating, computer nooks, and a coffee shop—all right on campus walk.

Andy Rush was joking with me a month or so ago about how I’d be running over the goal line with this one on my blog. But that’s not gonna happen, as much as I’d love to after seeing it. I’ve been on the outside of the design of this building from day one. I was the naysayer of the group who refused to believe it would ever get funded back in 2006. When the financial crash hit in 2008, I was certain of it. And even after it got funded I was still talking smack about the state’s penchant for investing in capital projects not people, the loss of DTLT’s DIY grit, and on and on. All the while the three DTLTers who’ve been central to the process from day 1—Martha Burtis, Andy Rush, and Jerry Slezak—paid me no mind and went about designing a remarkable building, making sure all the while they continually communicated “what the IT Convergence Center should be.”

Video stolen from this post by Andy Rush which was in turn taken from TrueLook, Inc. and courtesy of W.M. Jordan Company

After my tour yesterday it was easy to understand what they’ve been excited about all this time. They took the longview on this one, and they were right. And while my focus is on DTLT’s contribution, this building wouldn’t have been possible without a number of people from all over campus, in particular UMW’s associate Provost John Morello (chair of the building committee) and Len Shelton (UMW’s project manager on the ground). It was truly a community effort to realize this space, and it was really cool to see just how indelibly DTLT left it’s mark on the final design—and I had nothing to do with any of it. 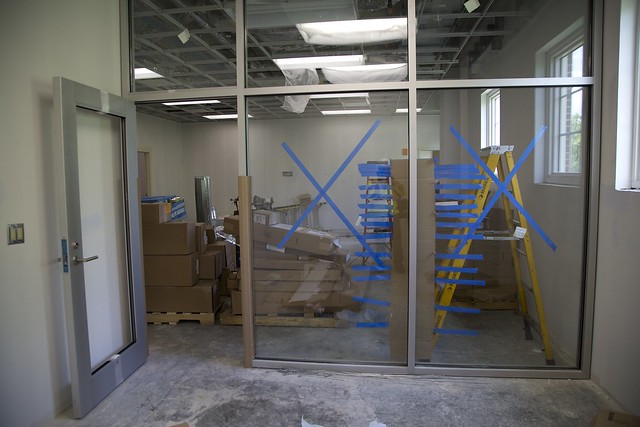 I paid for my neglect of the ITCC with my office 🙂 Image credit: Andy Rush

During the building tour yesterday, it struck Mary Kayler and I just how intimately Martha knew every detail of that building. That’s when it hit me how cool it must be for her to realize the fruit of what been at times a trying and frustrating process of communicating the future of UMW. I think it might have been worthwhile when you live to see that work realized room by room 🙂 The old gold DTLT trio of Martha, Jerry, and Andy continue to prove why they’re the core of so many of the great things that have emerged from UMW’s DTLT over the last decade. It’s been an honor to walk alongside them, even if I was completely unhelpful along the way of this project.

Finally, you know this building is a big deal when it pushes Jerry Slezak back into blogging again. It’s starting to feel like old times around DTLT again, we got Jeff McClurken leading us towards the future. And with Tim Owens and Ryan Brazell locked in for what will be a transformative move into the future of our group, the potential for realizing the rich possibilities of the digital liberal arts have never seemed closer.

This entry was posted in dtlt, umw and tagged dtlt, featured, itcc. Bookmark the permalink.