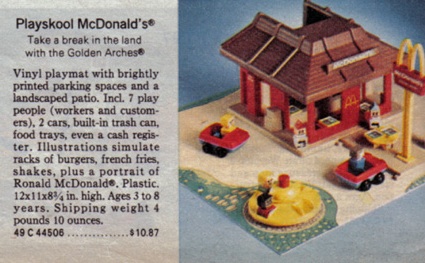 While the liberal media has killed the beauty that is McDonald’s over the last decade, I remember a day during the 1970s when McDonald’s wasn’t poisoning the underclass and undermining all that is good and right about the unaffordable organic food movement. McDonald’s will never simply be just another chain burger joint, McDonald’s was a “familiar place” to use Playskool’s advertising of this series of toys in the early 70s that included Texaco, Holiday Inn, and McDonald’s. Of the three, the McDonald’s set was the only one worth having, and it was one of the most memorable toys of the 70s. Not only was it a place I was intimately familiar with as a kid (our family ate there more than a few times a week—and it was a sit down meal with all 8 of us), but the fact was remarkably re-enforced by the design of the toy. The restrooms were uncannily like the one’s at our local McDonald’s, and the whole thing just seemed so intimately familiar that I could play out our family adventures from that very evening with a few block-headed figures.

Although, in truth, the genius of this toy was the dinging cash register and the elaborate tray system. Not only did the trays fit between a character’s chin and chest so they could carry them around. But there was a kind of tray sliding system that allowed you to move them throughout the kitchen area, and even place used trays into a depository in the side of the restaurant. It was one of the most compelling designs of a toy that I can recall from my childhood, and the “familiar places” theme that Playskool used was both insidious and fascinating all at once. I loved this toy, and the triangle hat-wearing blockhead characters always struck me as unique, but the larger fact is that the whole toy was actually as functional and efficient as McDonald’s—which is why I still love them both.

And if you’ll excuse me, I have to go and bid on this set over at Ebay, which, by the way, offers some wonderful images with brilliant detail of the very elements that intrigued me so as a kid.

The restrooms were true-to-life! 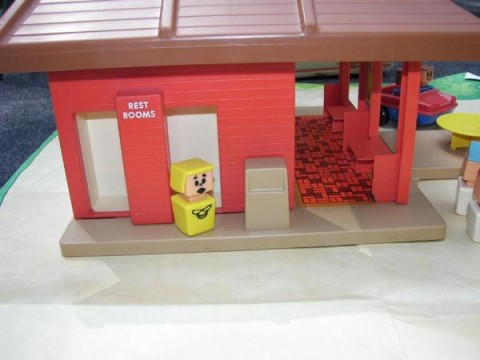 The cash register that dings and the trays, which were my favorite part of this set,
they fit cleanly between the blockhead characters’ chin and chest 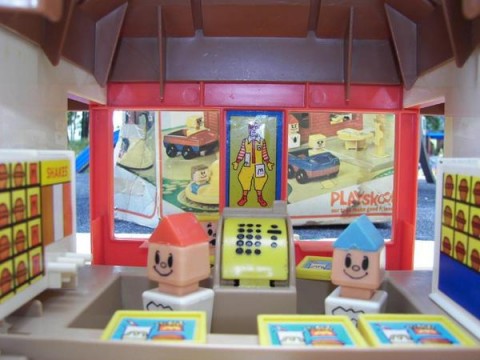 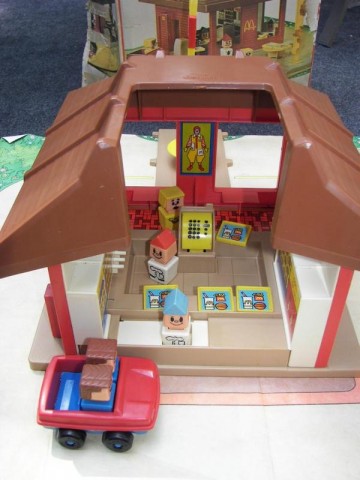 The Tray Return was my favorite part of the set, it was so streamlined, just like McDonald’s 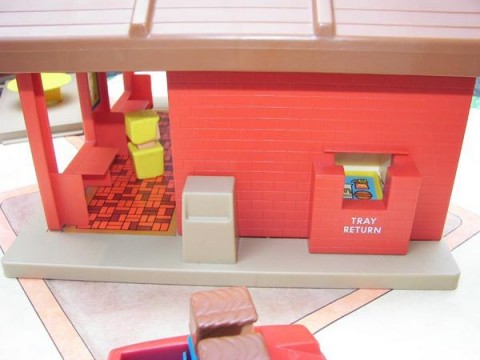 This entry was posted in 1102xmaS and tagged 1102xmaS, McDonald's, toys, xmas. Bookmark the permalink.