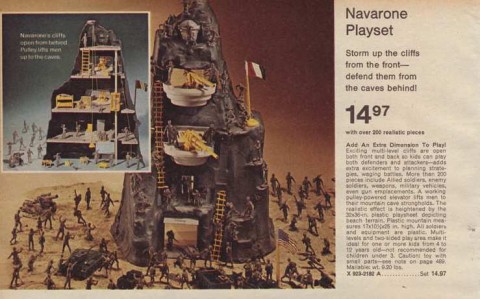 I was never a big soldier figurine kid, I had my share of tanks and little green soldiers, but I was often far more impressed with the Fisher Price sets, which had all kinds of trippy nooks and crannies. That said, the Navarone playset is one of my earliest memories of a full-fledged toy that had hundreds of pieces, and I put the three-level mountain fort together all by myself. I remember the yellow howitzer and rope ladders, also the elevator was a bitch to figure out, and I had to pull in my older brother for that one. But in the end, it is one of the toys from the 70s that really captured my imagination given the pure scale of the whole operation. It was also one of those toys that was not based on a film, but pushed me to watch Force 10 from Navarone (1978) which came out a year or two after I got the toy.

Looking more closely at the Navarone playset in the Sears catalog it’s ironic for me to see it has the Americans pitted against the Italians, rather than the Germans, which, in retrospect. is an interesting harbinger of things to come 🙂

This entry was posted in 1102xmaS and tagged 1102xmaS, Navarone, toys. Bookmark the permalink.