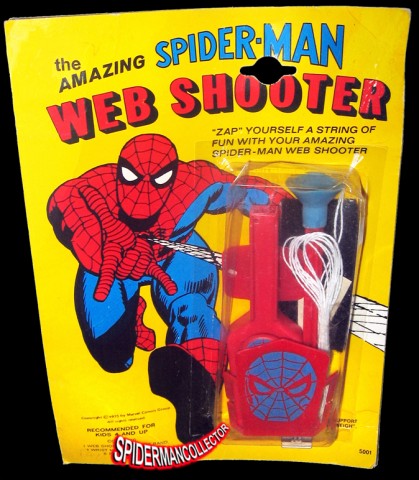 In 1975 or 76, Funco’s Spider-man Web shooter may have very well been the single greatest thing that happened to me up and until that point.  The idea of actually shooting my own dart from my wrist (which I imagined then as a 6′ long web) was nothing short of revolutionary to me.  The idea of wearing this toy on your wrist, and walking around the neighborhood provides a remarkable occasion of imagination.  This was not simply a toy, it was a portal to another dimension of identity and possibility.

What’s more is that I didn’t get this from Sears or for Xmas, I picked it up at Howie’s, our neighborhood Candy store run by Howie Herman and his perpetually 100 year old mother, who had an mole the size of Texas on her cheek.  It was a magical store, and it was only a matter of time before it made its way into this series. Howie’s is an entire series of its own, I learned much in this store: saw my first nudie mgazine, smelt pot for the first time, and saw Howie Herman and one of his special lady friends having a full blown fist fight. It was a wild store, and there is much more to be said about it, but for the moment I should focus on the Web Shooter  because it still, to this day, remains one of the single most formative objects I ever played with—one must never underestimate the imaginative sense of power while having a lethal projectile on your wrist.

Image credit: The above image is from the  Spider-man Memorabilia Archive, which is a veritable treasure chest of Spider-man toys from the past forty year, a genius site.