The third week is where I hit a bit of a wall, riding high on Gardner’s discussion and feeding off the focused energy everyone had while setting up their domains, blogs, twitter accounts, etc. I asked them to read Douglas Engelbart’s “AUGMENTING HUMAN INTELLECT: A Conceptual Framework” as a means to start trying to bring together the power of the personal dynamic media and the early conceptions of the web as symbol, abstraction, and representation. The way Engelbart deals with language in this essay is truly amazing, but at the same time quite dense. Several students blogged how the essay was too technical to fully grasp, which in and of itself I don’t mind if they struggled with the ideas before class and posted about their questions and confusions. But where I think I struggled was in trying to communicate some sense of why we were reading this essay and what Engelbart was trying to conceptualize way back in 1962 with any kind of clarity  and relevance to our own experiment. A failed attempt at teaching Engelbart, I freely admit that, and I’ll have to take another approach to this essay the next time, but all was not lost because Samantha Whay’s post “Algorithms on the brain” about Engelbart blew me away. She’s a Computer Science student studying Artificial Intelligence, and her riff on computers and language was wonderful:

Computers are useful tools that allow us to model these subconscious algorithms of language processing and see just how valid our theories are. Computers don’t have dialects. They don’t have a register that changes depending on the social setting. Computers really don’t make mistakes in their algorithms unless someone else does first–there are no computer slips-of-the-tongue or mathematical errors…. I don’t feel that I’m knowledgeable enough just yet for me to say whether I agree or disagree with the Sapir-Whorf hypothesis, but just by knowing its basics I feel that I mostly disagree with the idea that “the world view of a culture is limited by the structure of the language which that culture uses.”

This is pretty intense struggle with some of Eneglbart’s heady notions about language, culture, and the means through which computers could augment human intellect. More than that, it gets at the questions of structure and limitations for a given culture being framed and reinforced by language—something I actually agree with. And for me, the place of a visionary or poet is to reframe that language, or through an acute recognition of patterns, cultural shifts, and language articulate the possibility for extending those limits, and re-imagining the structure.  An poet, not matter what the discipline one is speaking through. But therein lies some really interesting and larger questions to be wrestled with in Engelbart, and now I have a clearer idea of this, and I think it may be something I need to think and write more about before I try and bring it back into the discussion.

The following class on Thursday we talked about themes and plugins. The first digital story they were to tell would be through the very design and experimentation they did with the look and feel of their site. And this process brought us back to some of the basics of web hosting. How the file structure works in their web host. What the public_html folder is, the directories that make up their WordPress blog, etc. They also were to experiment with using FTP, and despite the awesome tutorials Matthew Keaton did for the rest of the class on using FireFTP (he’s a tutorial ringer), the wireless connection at UMW seems to forbid FTP, making this fairly difficult for a number of students.

The other thing I asked them to do after playing with uploading files to their web host, was create a simple index.html file for the root of their domain. This may seem retro given they have a number of powerful open source CMS tools to choose from, but I can’t help but think some basic HTML and CSS skills might reinforce some simple code literacies and reinforce how a web server server handles a simple index.html file.. And what’s more is I gave them very little guidance, I asked them to use Google, and figure out how to write some basic HTML and CSS. I also suggested a good way to start playing with their blog space for anyone familiar with HTML and CSS would be to share any resources or sites they know about or use with the rest of the class. And, sure enough, other students took that suggestion to the bank and posted about the resources they use. It even led Captain Charlie Rocket to post this image, which is priceless:

We also started checking out where people were with their blog design, and rather quickly Mr. Charlie Rocket had photoshopped a nice header image, and created a background I want for the bava: 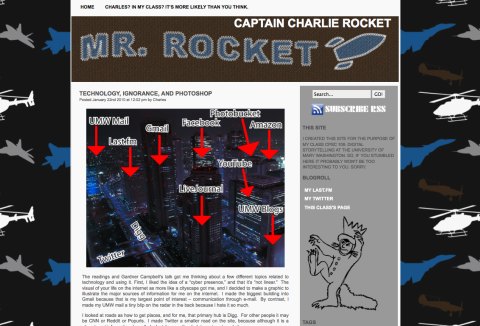 Erin Longbottom graduated her Twitter avatar to a blog theme header, and I’m digging that. She also got us started on the Digital Storyteling examples early pointing us to an early prototype of the picture-a-day phenomenon that is such a popular form of storytelling on the web currently, and Jamie Livingston’s polaroid photo-a-day for almost twenty years, up and until his death is both fascinating and harrowing.

Finally, Sam Rodgers’s theme for his domain chasinglilly.net really provides an amazing example of just how much a few hacks and a little obsession can tell your readers about you—going a long way towards illustrating the idea behind blog theme as story. Sam happens to be a Lost fanatic, so he hacked his blog to represent his passion for Lost, and I have to say it’s a lot of fun. Moreover, he created a screencast tutorial of what he did and how.  Very cool, the digital stories emerge from a  community of conversation, need, and ideas. So much better than trying to explain story with a textbook.

And, as for plugins, students started playing with the basics, like Akismet, and posting about how they set it up, which is quite a usefulr esource since everyone in the class is expected to setup Akismet, or some other spam filter. I believe this very informal, learning premised form of narrating a process helps all closely consider our process as well share back something we’ve learned, a virtuous cycle that has been absolutely central to my own development in understanding the value of the online space. I mean what will happen when there’s nothing left to figure out for ourselves cause everyone has an iPad? Blogging the process of their experimentation is key to this class being successful, and thinking hard about what this space means is where the discussion and interaction will be key. I have to say I am really happy with their interaction on one another’s sites so far. They’ve all got a Google Reader account, and have subscribed to each others blogs, despite the course site acts like a reader. I figure Google Reader is much more efficient at reminding you what you have and have not read, and pushes the practice of maintaining a series of subscriptions to other blogs and sites as they move forward.