Over the past week we have not only seen the disappearance of THE Dr. Oblivion, but also the emergence of another Dr. Oblivion who at first claimed to be the real #ds106 Dr. Oblivion, but then retracted this story to clarify that he was in fact retired fisherman from Swaffham (where ever that is). I would link to all these details, but his blog his currently been taken offline by the local police as they server as evidence in an investigation.

So, given the latest development, I think it is high time to come clear with what I do and do not know. I have been contacted extensively via direct message on Twitter for the last week, and those messages have ranged from delusional to accusatory. I have consistently been the object of this particular Dr. O’Blivion’s oscillating moods. I tried to keep my responses to a minimum, but after hearing what I did today over Skype during class (recording following shortly), I think it is prudent to share everything before the authorities intervene so that I can clear my good name.

If none of this makes any sense at all to you, I understand completely, and you should go to Michael Branson Smith’s narration of the events so far here. That will take you up and until today’s tragic call I received from A (not THE) Dr. Oblivion.

So, A (not THE) Dr. Oblivion recently accused me of putting a contract out on his life. Suggesting I as jealous that Dr. Oblivion was now teaching ds106 and I had been relegated to the position of TA this Summer, which I believe is a very noble position in such a rarified course being led by such a visionary as THE Dr. Oblivion. Anyway, A (not THE) Dr. Oblivion recently pointed to this site as evidence that I, Jim Groom, had put a contract out on his life. We all know anyone could have done this, it is basic internet literacy not to trust such disembodied, textual identities. But, something went wrong, there was a so-called Mr. Fixer who started emailing me, and here are our exchanges, for the record:

I can make arrangements for accident or suicide.

ps. there is tension in situation that was unexpected and unplanned for. Some of the connections between Oblivions have blurred and some are left in baffled state. Elimination may be best asap. We might also allow him to continue? Will wait on your directions before final actions are taken.

This email will disappear ten seconds after it is read.

Are you saying you wish to discontinue our efforts regarding Dr. Oblivion? I have spend a large sum of the monies you deposited and I have spend considerable effort tracking him.

Mr. Groom, those in my profession are a close knit group and I will be explaining our interaction to them. You have cancelled on a contract. You will have a hard time finding such resources again.

I believe I will spend the rest of your money on a trip to Jamaica.

Hopefully this email exchange will help to clear my good name. What’s more, this so-called Mr. Fixer is now direct messaging me as @OblivionDoc as a means to inimidate me. See the following: 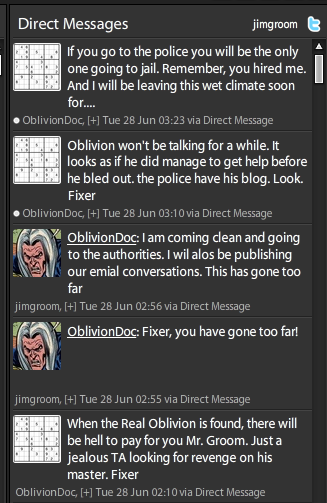 I hope this evidence proves I have done everything I can to help the authorities. Given those direct messages from Mr. Fixer it seems that A (not THE) Dr. Oblivion may still be alive, but who can be sure at this point. You should be able to better judge once we share the broadcast in which the audio of Mr. Fixer attacking A (not THE) Dr. Oblivion was captured. Fact is, at this point I don’t know who or what to believe, and I really hope someone can offer a clue to what’s next? Any lawyers out there who can give me advice to protect myself from the certain barrage of questions, accusations, and general infamy? I’m just the ds106 TA, and I need your help.

Update: In the comments below Martha Burtis asked for some screenshots as more conclusive evidence. I could just as easily have PhotoShopped this info in Gmail, but given it is all true, here are the screenshots, and I will be happy to share my account info with you if you want more. I am innocent! 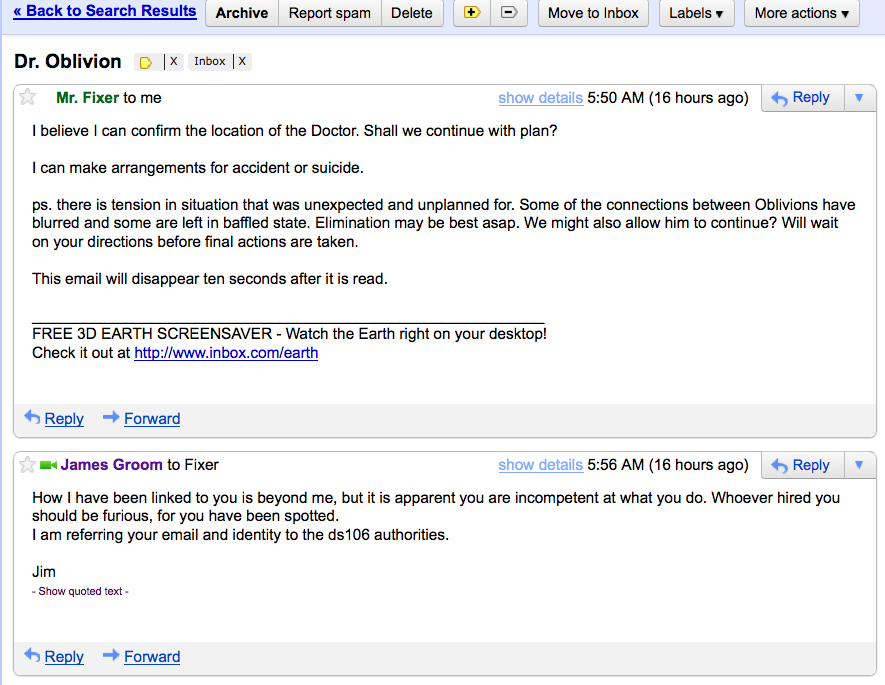 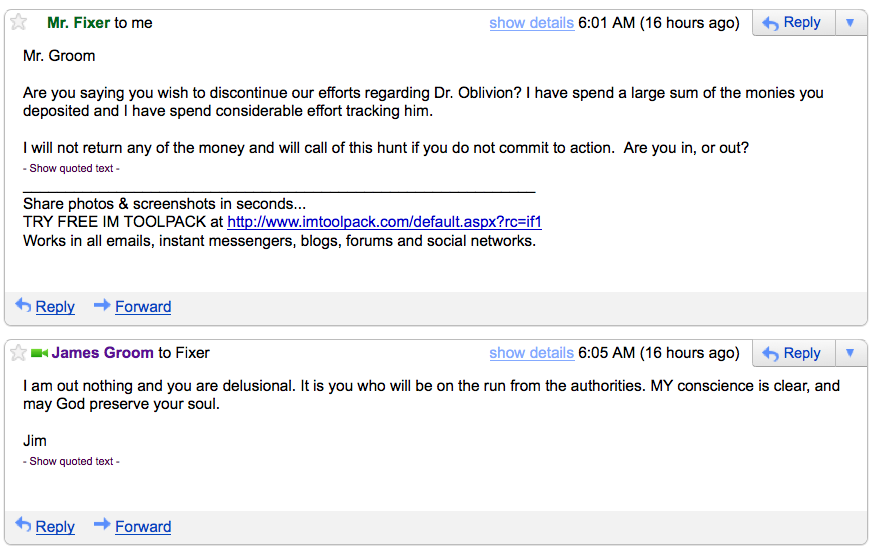 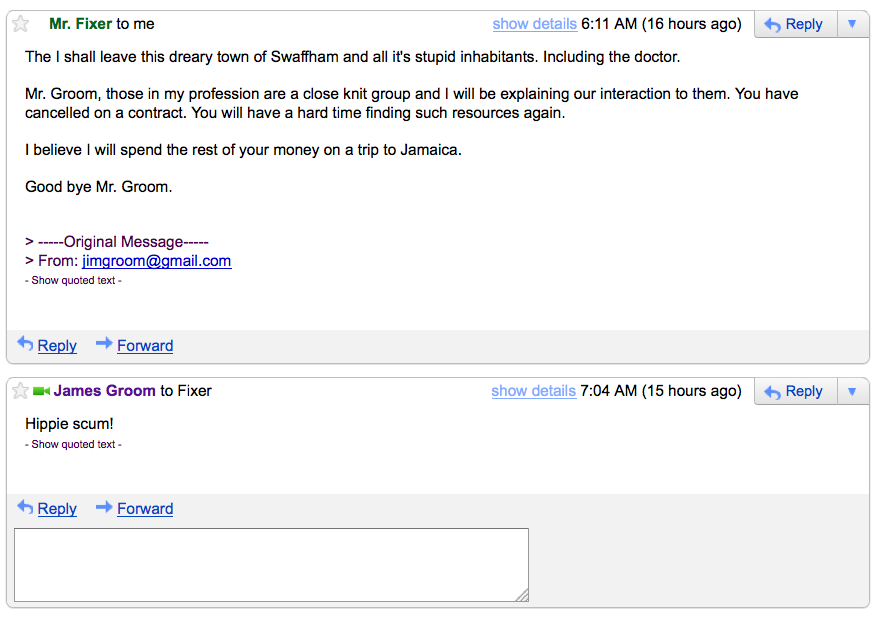 This entry was posted in digital storytelling and tagged Dr. Oblivion, ds106. Bookmark the permalink.