Egypt Calling or, Why Open Rules 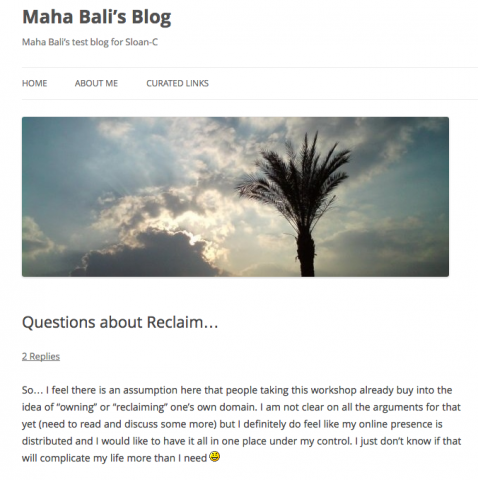 I had been procrastinating a bit on the “Reclaim Your Domain” workshop I’ll be running in just about an hour’s time at the Sloan-C Emerging Technologies Conference.  This is the first time I’ve workshopped what we’re doing at UMW with Domain of One’s Own, and thanks to the service Tim Owens and I started, appropriately named Reclaim Hosting, it’s been pretty cool. I already talked about the setup of the workshop here.

You see the workshop will also include virtual participants, In fact, there will be folks joining in as far away as Egypt as I learned on Twitter.

@jimgroom looking forward to your two talks on #et4online which i will be attending virtually 🙂 here from Egypt
— Maha Bali (@Bali_Maha) March 31, 2014

So I wanted to be sure I had documentation and a platform that would enable the virtual folks to particpate seamlessly.

@Bali_Maha Excellent, if you’re doing Reclaim Your Domain workshop virtually, i think it would work well. Let me know and we can pre-plan!
— Jim Groom (@jimgroom) March 31, 2014

As a result I learned how awesome Maha Bali is (I was originally referring to her as Bali because of her domain, I suck). Two days ago Tim and I got the reclaimdemo.com site up and running (admittedly later than promised) and thanks to Maha, who was kind enough to offer testing rom afar, I think it might actually work.

But more than testing out the site, and test it out she did, she also wrote a post on her sandbox domain at bali.reclaimdemo.com calling out some key questions I need to address more broadly as part of the Reclaim push:

I feel there is an assumption here that people taking this workshop already buy into the idea of “owning” or “reclaiming” one’s own domain. I am not clear on all the arguments for that yet (need to read and discuss some more) but I definitely do feel like my online presence is distributed and I would like to have it all in one place under my control. I just don’t know if that will complicate my life more than I need

This is the real question I need to get at whether or not the platofrm works. I assume folks see the value, and I forget that I have to try and make this whole thing relevant to someone who isn’t necessarily an edtech fanatic like me. I need to step back a bit and start thinking about what a domain and web hosting has offered me on personal, professional and practical levels as an educator, edtech, father, and more generally a person online in the 21st century.

This was truly invaluable feedback, but I am not surpised because Maha seems ot be a truly cool person who embodies the spirit of open collaboration and is a welcome reminder that these networks lead us to real people. This is what happens when you openly and actively engage people online. Openness is like the force in Star Wars: “a river from which many can drink.” But Maha says all this much better on her blog, which may even be hosted on her own domaina nd web hosting with a shiny new domain sometime soon 🙂

This entry was posted in reclaimopen and tagged et4online, reclaim hosting, reclaimhosting, wokshop. Bookmark the permalink.