I’m not sure if you have been noticing, but Michael Branson Smith and the CUNY Yorkians have been tearing up ds106. The work there has been amazing, and MBS’s latest work “Fat Chance” which is a series of Monopoly cards that frame some of the concerns and deep structural issues of the wave of discontent that might be emerging. They are magic!

Then add to the insane work MBS is doing in ds106 and marry that to his brilliant street reporting from Wall Street on Wednesday and you have some greatness. I was extremely taken with the interview with Sharon and her grandson who had come from Michigan to let the financial industry know they were fed up. Wow, that is weird for me to thing about as a position people in the US come around together, and it really excites me. So, below is the audio from the interview as well as an image. Some of the best radio I have yet to hear on the mighty ds106radio. 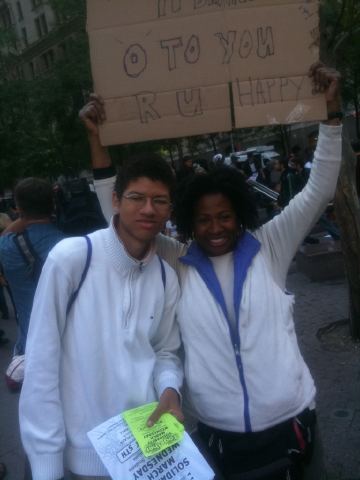 And here is both Sharon and her Grandson’s audio filtered down from the archive Giulia managed to capture—she is awesome.

2 Responses to Fat Chance … #ds106 could rock any harder