The other day at Reclaim Hosting we were having some issues with the Devo server. Load was high and while investigating it I happened to see traffic to the domain hardcoreshowflyers.net through Apache status. I was intrigued, so rather than fixing the server I headed over to the site (I jest, Tim fixed the server—per usual 🙂 ) to see if it was what I thought it was, and boy was it ever. 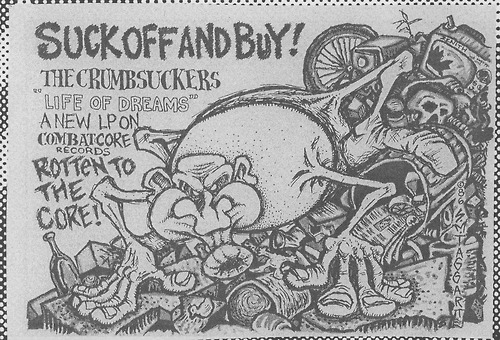 The site was a full blown archive of hardcore punk show flyers from the 1970s through 2017. After this chance discovery I proceeded to lose a good part of the day. One of my earliest music shows was a Sunday matinee at CBGBs in 1985 to see the our hometown punk band The Crumbsuckers. It just so happens that they were playing with New York City hardcore legends The Cro-Mags—I was pretty blown away. I am not certain, but this flyer could very well be an advertisement for that show I went to in 1985: 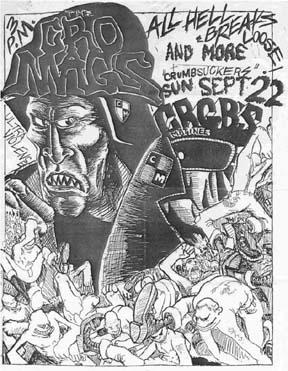 How this fuels my penchant for nostalgia. But the craziest part is looking through the flyers to see what shows I was at. Crumbsuckers were my entré to the scene, and I quickly learned to love the Cro-Mags, Murphy’s Law, and Agnostic Front (a kind of trio of NYC trashcore), but the Bad Brians were something else all together for me. It led me to the DC scene and the straight-edge movement defined by Minor Threat, which then led me to Dag Nasty. At the same time the straightedge scene was gaining steam led by Youth of Today, Judge, Uniform Choice, and Bold. I went to more than a few Youth of Today shows, and after a while it began to get fairly boring and preachy with Ray of Today talking shit on “the dope smoking longhairs” —and then a whole bunch of bands (including the Cro-Mags) became Hari Krishnas and I was outta there. 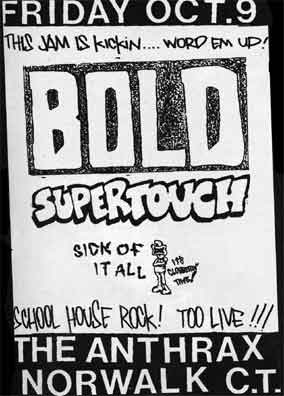 Bold, Supertouch, and Sick of it All flyer for a show at The Anthrax in 1987

I know I saw Youth of Today and Uniform Choice at CBGBs, and I believe a show with Bold and Judge (though not sure if they played together) at The Anthrax in Norwalk, Connecticut in 1986 or 1987. But the site also reminded me of bands I have seen but not thought about in a long while like Supertouch, No for an Answer, Sick of it All, and many others. There were a ton of bands associated with the scene, and it’s amazing how these simple flyers capture not only my imagination, but chronicle the various sinews of a entire subculture.

This is very cool work, and once I fell down the rabbit hole I noticed the site was looking for patrons. I could not resist, for me the folks who have the time and patience to collect and curate an archive like this provide an indispensable service that takes a ton of effort. What’s more, it directly feeds into my personal interests and history. I immediately benefitted from it, so it only made good sense to support he work. But cooler than that is it was using Reclaim Hosting so we could waive hosting fees to try and ensure a site like this stays online as long as possible. Hardcore Show Flyers represents the best of the web for me, a niche collection someone has amassed and wants to share freely over time. This is obviously a passion for the proprietor, and the small, passion-driven web wins for me every time. Thanks for this.