He Took It All Pretty Quietly

We’ve been playing around with the #6wordstory in the Hardboiled course, and this post by Sarah Clay gave me the idea to further build on Michael Branson Smith’s idea to have students summarize each story with a 6wordstory. Here is what Sarah wrote:

In the field of Physics, there is a collective theory that in order to prove you really understand something, or that an aspect of our world is fully explained, the formula created must be able to fit cleanly on a t-shirt. If this were applied to English, Hemmingway [sic] would be like the Haynes-man or something, because he is so direct in his stories. I have no doubt that he would be able to fit the meaning of each of his stories on a t-shirt.

Take that, and lay that on top of Michael Branson Smith’s suggestion to have student use the 6wordstory concept to summarize each of the stories we read this semester, which I re-focused towards In Our Time, and you have an awesome assignment. My small contribution is to add an iconic image to the mix. So, what we have is 6x6x6: 6words, 6stories, 6shirts. 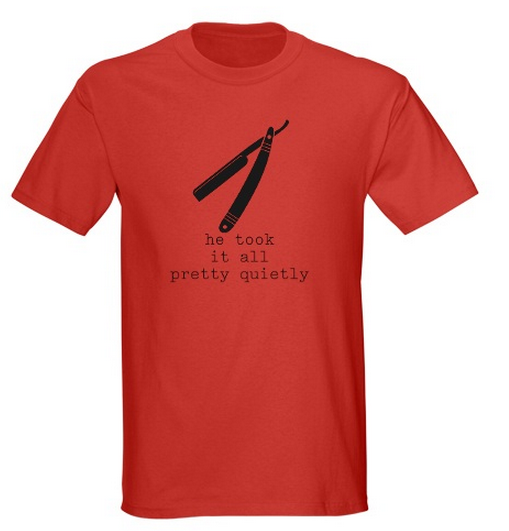 That’s right, students will be required to create six shirts for six stories from In Our Time, with six words and an iconic image that can be associated, however loosely, with the words. I did the above t-shirt on CafePress (which means there is no image editing overhead except getting the transparent icon from The Noun Project—I discuss this in the quick tutorial below). I chose the black text and black icon on a blood red shirt for added effect! How cool is this, using CafePress for an assignment in the Hardboiled course? Martha Burtis was wondering how I would begin to integrate ds106 into this lit seminar, and last night really felt like I was getting there. What’s cool is it really was Sarah And Michael that laid the groundwork (which is always the case when you open your ideas up to others), and I’m just wrapping it up and assigning it! Did I mention how awesome it was to talk about Hemingway’s In Our Time in a classroom setting? I’ve missed great literature! Here is the context for the above shirt from one of Hemingway’s greatest short stories “Indian Camp”:

“Ought to have a look at the proud father. They’re usually the worst sufferers in these little affairs,” the doctor said. “I must say he took it all pretty quietly.”

He pulled back the blanket from the Indian’s head. His hand came away wet. He mounted on the edge of the lower bunk with the lamp in one hand and looked in. The ndian lay with his face toward the wall. His throat had been cut from ear to ear. The blood had flowed down into a pool where his body sagged the bunk. His head rested on his left arm. The open razor lay, edge up, in the blankets.

You can read the entire story here. 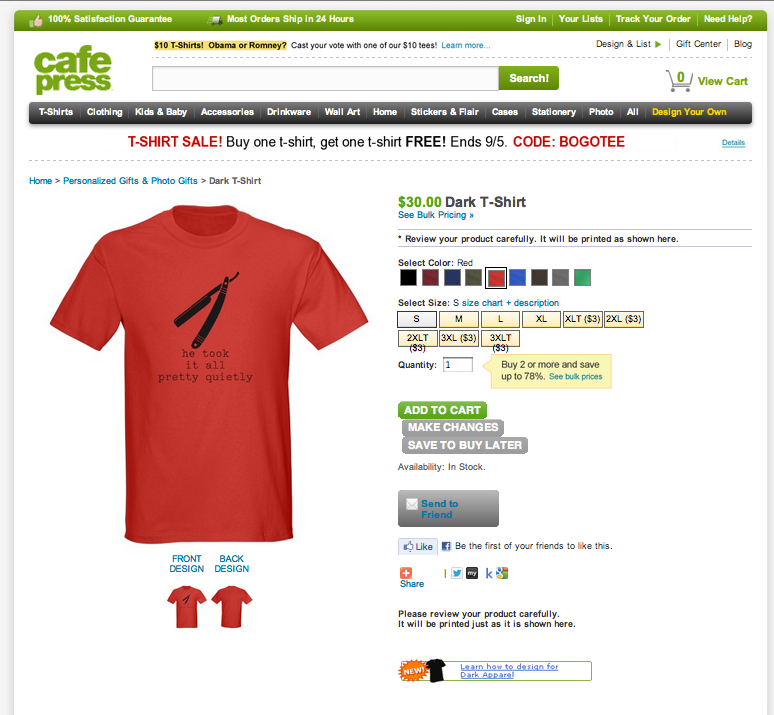 So, late last night while trying to go to bed but still too excited about this assignment I got to thinking of another design for a t-shirt, this time for William Faulkner. 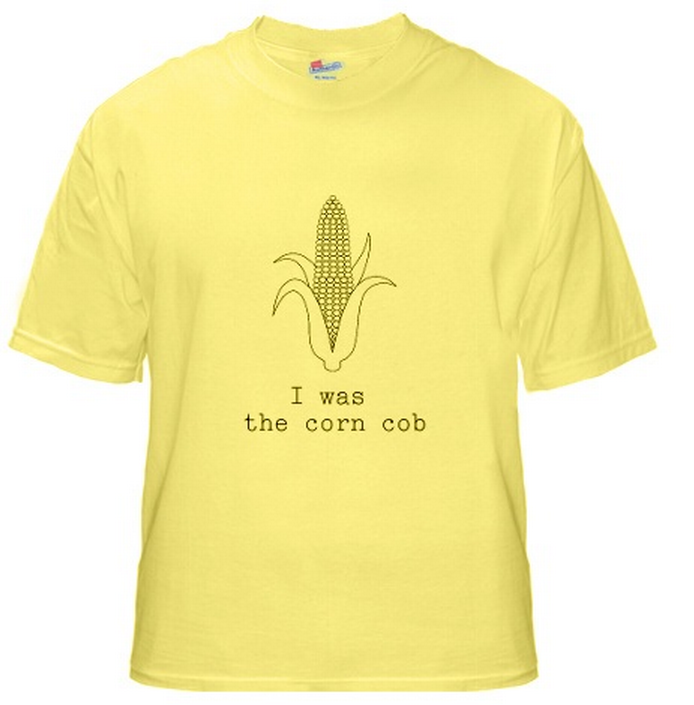 In Sanctuary there is a famous scene of a rape with a corncob. There is a story in Faulkner lure that someone asked him, “I hear that writers always insert themselves in their books through one of the characters. Which character from Sanctuary are you?” To which Faulkner replied, “I was the corncob.”

A Quick Tutorial
Using CafePress and The Noun Project to do this assignment. For the Hemingway-inspired straight razoe quote from “Indian Camp” I found this straight razor icon on The Noun Project thanks to Proletkult Graphik. This icons are highly recommended because they are vector graphic files and scale up seamlessly and have a transparent background (which makes the shirts look awesome). What you need to do is download the svg file from Noun Project, open in the the free image editing program GIMP, and resize it—probably to about 1500 x 1500 pixels) then save it as a PNG file with a transparent background.

After that, go to the CafePress site and click design a t-shirt. Pick your style and color, and then upload the icon image file and add some text. That’s it, you’re done. The only real work is converting the SVG file to the PNG format, but it is pretty simple, if you have an issue let  me know. Now go make some literary art, dammit!

4 Responses to He Took It All Pretty Quietly