IMPs of Internet History at UCLA

On Wednesday I saw this tweet from Miriam Posner announcing that one of the pioneer developers of the internet, Leonard Kleinrock, was going to lead her students on a tour of the site at UCLA where the internet came to life.

We’ll be joined by Leonard Kleinrock and @brfidler, who will lead us to the site of UCLA’s first ARPANET node following the lecture.

I was immediately intrigued because I’m co-teaching a course on the internet this semester, and I just read all about the conceptualization and development of the ARPANET during the 1960s. Kleinrock’s name was constantly mentioned thoughout the 1996 history Where Wizards Stay Up Late. He was an enginnering professor at UCLA and his colleague and good friend Larry Roberts, director of ARPA in 1969 and principal architect of ARPANET, was influenced by his work analyzing communication networks and tracing the problem of data flow in networks. Kleinrock received a contract from ARPA to setup the Network Measurement Center which in 1969 would be the home of the first Interface Message Processor (IMP) —one of four machine that started the internet. 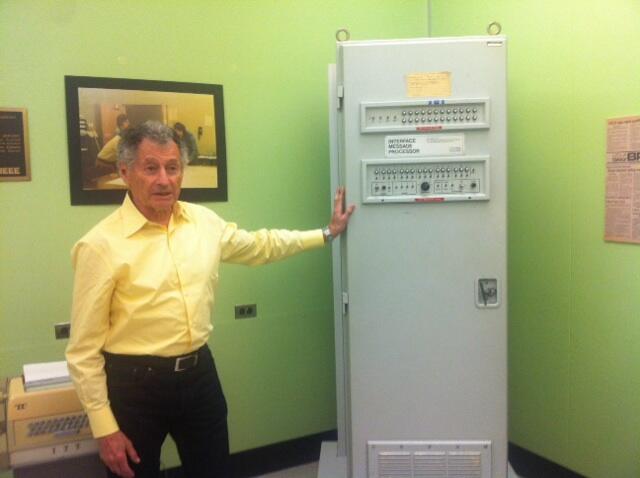 What’s so cool is that Miriam not only shared the fact so that I could get excited and share this with my class, but she took pictures of Kleinrock with the IMP UCLA’s Boelter Hall that made the first connection with Doug Engelbart’s Stanford Research Insititute. In the following image you can can see Kleinrock explaining how the IMPs at UCLA, SRI, UCSB, and U of Utah connected four distinct computers amongst these institutions. 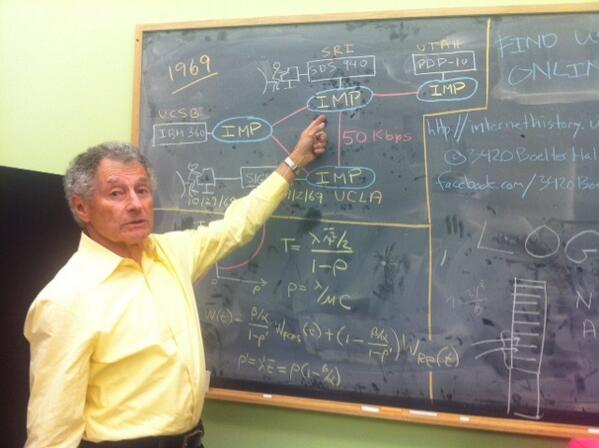 The beginnings of a technical infrastructure that has fundamentally changed the way the world communicates in 50 short years. The reading I’ve been doing on the history of the internet has been a most enjoyable rabbit hole to fall down. As we’ve switched focus in the Internet Course from the history to the technical details of how the internet works, I’ve been tripping out on the emergence of the window through which most of the world would come to know the internet: the world wide web.

I was actually at UCLA in 1994 when I first browsed the web, and I remember the Computer Science student (his name was Andre) who got us all hooked up to the web and showed us the ropes. At one point he noted that the internet “started at UCLA.” I wasn’t exactly sure what that meant at the time, but I thought it was pretty awesome when I actually saw what it translated to in terms of warez sites 🙂  I  worked at Audio Visual Services in the basement of Campbell Hall (room B-125 to be exact) which is on the other side of campus from where the internet was turned on in Boelter Hall, but it’s my own small piece of personal history with the internet that Kleinrock helped make possible.

I have to be honest that I have a certain amount of irresponsible nostalgia for those days more generally, and the early web in particular. And that nostalgia is only fueled by tour-de-force posts like this one written by Alan Levine about his edtech adventures at Maricopa during the early 1990s. Not only that, Cogdog’s recollections of the early 1990s demonstrate beyond a shadow of a doubt that he truly is the edtech archivist par excellence!

I love this stuff, and I can’t thank Miriam enough for sharing the experience. It reinforces that understanding the web’s history remains vital to its future. And, coincidentally, it provided a unique opportunity to illustrate to several faculty I was showing Twitter how such networking tools open up a world of possibilities for augmenting the academic experience.

This entry was posted in The Internet Course and tagged history, Leonard Kleinrock, tic104, UCLA, Where Wizards Stay Up late. Bookmark the permalink.