A few weeks ago I watched Fernando Di Leo’s Milan caliber 9 (1972) and loved it. Unfortunately I’ve been too crazy to write about it sooner, so not all the details are fresh with me. That said, there are a number of things that stick with me from this 1970s Poliziotteschi that I can’t stop thinking about, so this is my attempt to get it out. Milan Caliber 9 is the first part of a trilogy—I still need to see the other two: Manhunt (1972) and The Boss (1973)—and it focuses in on the extreme violence that was a reality in Milan during the early 70s between a variety of forces, namely the mafia, left-wing radical groups, right-wing fascist groups, and the police. It was a time of political insanity in Italy, a period nick-named “The Years of Lead” for the number of bullets that flew. To get a sense of how entrenched these extreme, paramilitary forces were in street violence, check out this chronology.

There are two things I particularly liked about Milan Calber 9 in this regard. The first was that the “hero” of the film, Ugo Piazza ,is a small-time criminal that comes in the form of a middle-aged, stocky, and balding tough guy. Given my own lot in life currently, it’s encouraging to see that this type had some play in Italy during the 70s. The part was played brilliantly by Gastone Moschin whose probably most famous in the U.S. for his role as Don Fanucci in Coppola’s Godfather Part II. 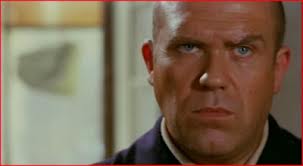 The second thing I loved about this film was the role of the police commissioner played by Frank Wolff, an American character actor that spent more than a decade acting in a wide range of italian b-movies. He killed himself soon after completing this picture, and he gives a pretty entertaining and compelling performance as the old school, jaded police commissioner who discounts the social justice rhetoric of his deputy commissioner (played by Luigi Pistilli) who links the social problems in Italy at the time to the exploitation of labor from the South. The back and forth between the two happens at several moments in the film, and below I share them all in chronological order.

What I love about these scenes is how they frame a back and forth about the underlying social ills of Italy during these violent years. And while it’s arguably pedantic, at the same time I find the dynamic interesting given how inclined the police commissioner is to shut it all down. Rather than engaging the argument directly, he’ll reply with answers that I find funny, fascinating, and complex all at once, things like “Why do you hate the rich?”  I’m not sure I am doing the whole thing justice, but I can’t help but share these clips, they aren’t representative of the numerous scenes of street violence, bombings, and sadistic murders throughout the film,  but for me the following clips seem to be the pulse of the film, the struggle with a question Italian audiences most have wanted answered at the time-“what the hell is happening in Italy right now?” And the “right now” is important because this film was made during the height of the violence in Milan. For me it’s a new twist on an old standard of the hardboiled genre that hearkens back to the brutal violence and politic of Hammett in some really interesting ways.