Open is as Open Does 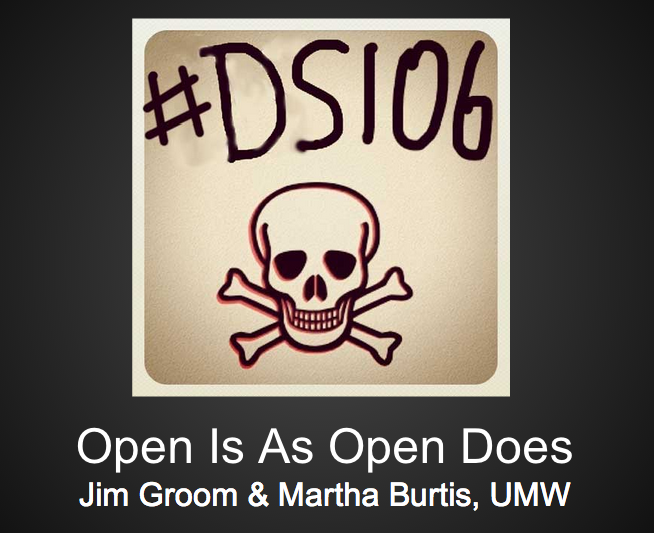 Yesterday I presented alongside Martha Burtis about ds106 for the OpenVCU Symposium. Martha and  I have presented about this course together before, and each time it’s a real treat because we tend  feed off each other’s excitment. It also helps that she actually plans things like presentations 😉  What became apparent to me while we were talking yesterday was not only how much ds106 embodies DTLT‘s hopes and dreams for the field of  edtech, but for the possibility for community more generally.

It was a real pleasure to finally come to VCU and get to see the movement their building down there around all things edtech first-hand. With so many folks I know, like Tom Woodward, Eric Johnson, Jon Becker, Jeff Nugent, Britt Watwood, Bud Diehl, and many more, it felt like a homecoming of sorts. That said, there was one conspicuous absence given their new Assistant Vice Provost of Awesome, Gardner Campbell, was nowhere to be found. I jokingly called him out only to hear afterwards he was at Hamphshire College with Jon Udell speaking at a conference I ‘d recommended them both for—serves me right! The symposium on open education was actually the larger indicator that Gardner was in the building, and in that spirit Martha and I wanted to try and get at the deep and variegated nuances that consititute open beyond the all too familiar catch-all:  open educational resources. In fact, I don’t think we even mentioned those once.

With that in mind, while planning earlier this week we decided to try a new approach to presenting ds106. We wanted to try and lay bare the various layers of open it operates through. We broke these layers down into three slices: open platforms, open pedagogy, and open community. What was quickly apparent as we were listing talking points under each category is how much each of these informs, and at times collapses into, one another. As a result, we came up with the idea of treating a number of the talking points in each of the categories as pieces we would return to later in the talk through a new lens (i.e. platform, pedagogy, community). 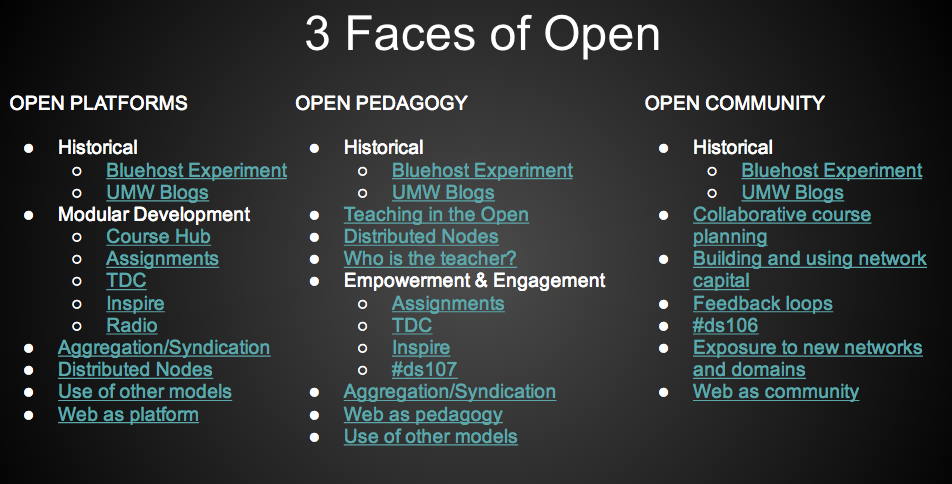 So, for example, we talked about the idea of syndication in terms of how it technically drives the platform of ds106 through RSS. About ten minutes later we returned to the same syndication slide under the topic of pedagogy examing how it provides a de-centered approach that liberates the faculty and students from a siloed, top-down teaching environment. Finally, ten minutes later, we talked about syndication, using the same slide, as a means of aggregating a wide variety of voices that made possible the open community. So rather than talking about syndication through a narrow technical facet divorced from its other qualities of augmenting pedagogy and building community, we explained it from three separate perspectives in the presentation with increasingly more context and complexity. As the presentation went on the blurring between the categories became more apparent on every return. Through a series of recursions within the presentation, I think we were able to give a deeper sense of the complexity of ds106 on every pass. 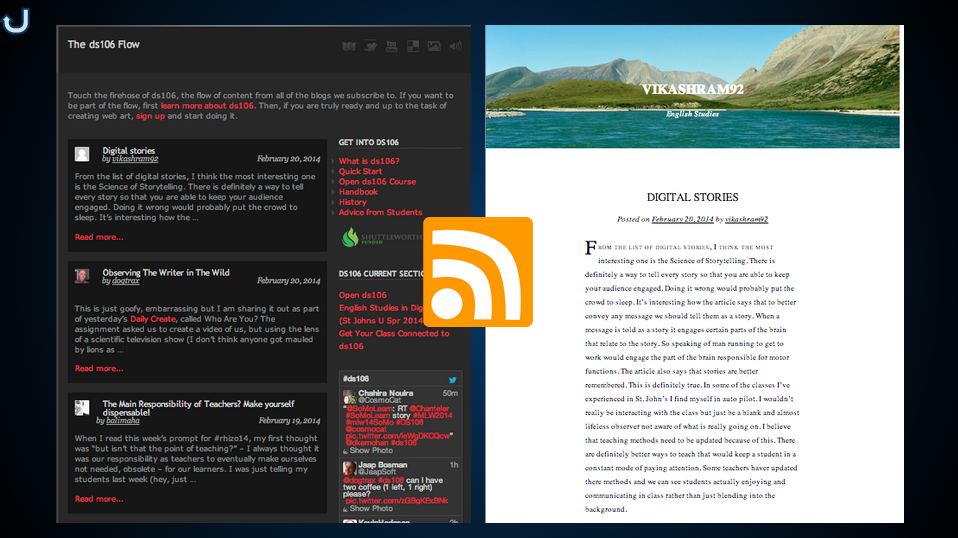 Now, we were limited  by the idea of a slidedeck when presenting this because we would regularly return to the same slide three times. In fact, the presentation was more like a  website than a linear slideshow. Given that, we tries to create it more along the lines of a website than a linear slide deck—even though we built it in Google Docs. In fact, Google Presentations allowed us to link various slides non-linearlly which helped us turn slide four into a homepage of sorts. On every slide Martha put a return icon in the upper left-hand corner bring us back home after every slide. Slide number four was the base slide from which we started talking about the three slices of open. It would be interesting to build this presentation as a website. And while we were planning Martha suggested it could be a ds106-o-matic presentation tool so that anyone could build a presentation about ds106 from a sets of slides and resources. I like that idea a lot 🙂

The other thing we did is send out a tweet asking folks how this course has impacted their exposure to online networks, people, and community. The response was overwhelming. The #ds106 community always brings it’s A-GAME!!! You can scroll through the responses below to get a sense of how a course can become a community—cults and all 🙂

There’s a video of the presentation on YouTube, but the audio comes in and out a bit at times. We also broadcast on #ds106radio, but I’m not sure the stream was archived—I was using Ladiocast 🙁  I guess this means Martha and I might just have to do this one again sometime soon. Will anyone have us? 🙂 Below are the slides, enjoy!

This entry was posted in digital storytelling and tagged ds106, openvcu. Bookmark the permalink.

5 Responses to Open is as Open Does