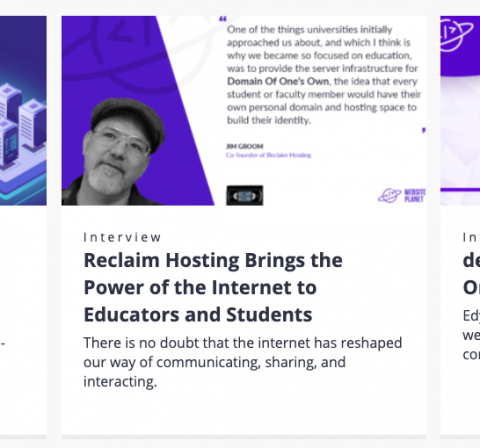 I was interviewed earlier this month about Reclaim Hosting for Website Planet by Gail Lobel Rand. Website Planet is site that provides information for folks who want to create a website, and they highlight and rate the various website builder services, web hosting services, logo design services, etc. with the idea of providing a it of a recommendation engine. Reclaim Hosting does no advertising and there was no pay-to-play going on here, so I figured why not do an interview and share the good word about the best little hosting company that could 🙂

Gail was great, and she was must interested in breaking down what hosting plans we offered for their readership. In the end, it turns out, most hosting company’s provide the same thing: either shared hosting and VPS hosting (both managed and unmanaged). We see no reason to do unmanaged VPS hosting given providers like Digital Ocean more than have that covered, so with us the options are pretty simple. The outlier offering is Domain of One’s Own, and that is a reality so specific to higher ed that I would be surprised if it resonates much beyond the educational world, but you never know.

I think Reclaim Hosting has survived (dare I say thrived :)) because we focus on a niche community whose specific needs are often not served by larger web hosting companies. What’s more, we understood higher ed and recognize pricing for students and faculty needs to be both transparent and affordable. I think I touch on all of this to some degree in the interview, but the thing that came out while talking with Gail was that Reclaim Hosting puts off a completely different vibe them most hosting companies. We have VHS tapes on our website rather than stock photos of server rooms, and we don’t play the death by 1,000 cuts up-sell game that so many hosting companies do. I also tried to throw some love to Alan Levine’s SPLOT work, CUNY’s Commons-in-a-Box, as well as some Omeka and Scalar plugs. In case it’s not clear from the article, we did not develop any of those apps, just helped with the Installatron installers.

Lastly, after getting asked to do something like this out of the blue, I begin to wonder if Reclaim Hosting is beginning to show up on folks’ radar outside the education sphere. Not sure about that, but if so it would be interesting to know why.

This entry was posted in reclaim and tagged reclaim, reclaim hosting, Website Planet. Bookmark the permalink.