The Insanity of Gender Trouble

A girl that thinks to assume the mask of a man, can shuffle off the baptismal name given her and take the name Alvin J. Ward, take the place of a man and marry a woman—Your Honor knows there was madness at the bottom of that.”
Colonel Gantt, testifying for the Defense
“The Pity of It,” Memphis-Appeal Avalanche 26 February, 1892 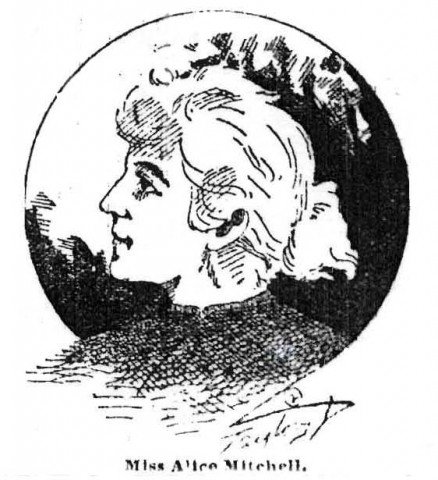 The above quote represents one of the most striking bits of Sonja Livingston‘s “Mad Love: The Ballad of Fred & Allie” creative nonfiction piece demonstrating how strictly defined and deeply inscribed gender roles were 100 years ago. No question they still are, but the fact that any deviation on this count was immediately and summarily recognized as insanity. It’s striking because it serves as a sobering reminder just how firmly our assumptions about what’s right, natural, and good are constantly corrected through a cultural lens. We’re still seeing this battle play out in terms of LGBT and gender equality—marking yet another moment in the battle for social justice for an underrepresented minority. And that becomes that much more complicated when you take these cultural assumptions in 1892 and frame them within a shocking and grisly murder between illicit lovers?

The brutal murder of Frederica Ward by Alice Mitchell in on the streets of Memphis, Tennessee in broad daylight amongst witnesses in January 1892 was just that. A shocking murder that became scandalous when Alice Mitchell openly admitted her intentions to assume the role of a man, marry Frederica, and live happily ever after as man and wife. Such a possibility was nothing short of madness, yet Livingston’s retelling of this tale more than 100 years later when this very issue is the most profound civil rights battle of our moment—it takes on a deeper sense of immediacy. This is a form of constructed insanity we’ve been trying to break free from for decades, and we’ve never been so close, just ask the thousands of gay, lesbian, and trans couples that have marriage unions recognized by various states around the U.S. So, the insanity of gender trouble becomes much ore about a culture’s evolving sense of tolerance (or intolerance depending how you want to understand this).

Yet, it would be unfair to suggest everyone at the time thought Alice Mitchell was insane, which becomes especially clear to me when the fact that lesbian relations were seemingly accepted at rich boarding schools like the one Frederica and Alice attended as a means to prevent some of the more apparent heterosexual scandals before a condoned wedding. The sense of same sex relations as experimentation and play before one grows up hetero is a fascinating moment in this narrative, and gives way to a sense of the hypocrisy at work within a class structure that can support such possibilities. And as
Paul Bond notes in this post, would this even be a story if it didn’t happen amongst the Memphis gentry. I found two articles in the New York Times database of articles at the time that tend to suggest that reporters were not so sure Mitchell was crazy as much as she was sly.  For example, there is this article that makes Mitchell seem like a cold, calculating murderer who knew insanity was an out: 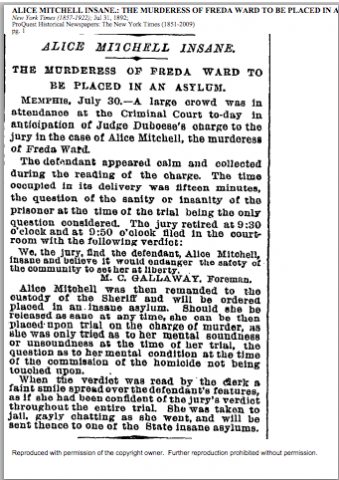 As the last paragraph notes from this trial piece:

When the verdict [criminal insanity] was read by the clerk a faint smile spread over the defendant’s features, as if she had been confident of the jury’s verdict throughout the entire trail. She was taken to jail, gayly chatting as she went…

There is another article in the Times from roughly six months earlier, February 12, 1892, in which the NYT reporters were seemingly looking for evidence that Mitchell was anything but insane. The following article tries to links letters from Mitchell to a book dealer in Pittsburgh to who notes that she “is a clever writer, and the story that she is insane does not agree with my idea of the girl.” 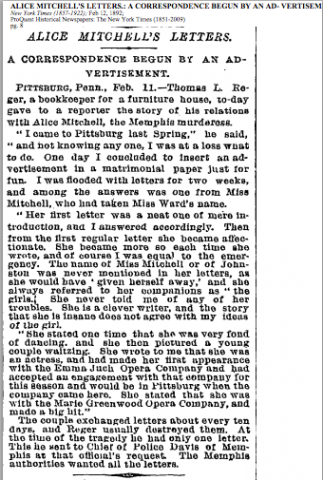 What’s interesting here is that you start to get a sense that there is a bit of a struggle around the idea of insanity in this case. And the possibility that Mitchell playing to the fears and prejudices of the culture when it comes to homo and/or transexuality is how they in many ways beat the rap of capital punishment. And this isn’t just the NYT reporters, you also have a very similar sentiment in a local, popular ballad about the two, the last two stanzas of which reads as follows:

There goes that Alice Mitchell,
With arms strong tightly bound down,
For the crime she did in Memphis,
She’s bound for Bolivar now.

And they won’t do anything to her–
She has two of the best lawyers in town–
But if they served Alice Mitchell right,
They would simply cut her down.

With a wealthy family and good lawyers you could be crazy too, but could you be queer? So questions of class, insanity, and gender converge in a case that offers up some interesting ideas of how so many cultural factors work together to give us just one perspective of a mutlifaceted incident as any event, no less a crime wherein people’s fates can be decided. The idea of truth as a construct of one’s position within a culture becomes more and more difficult to ignore, if not escape altogther.