The Life of a Reclaimer is Always Intense

I am sitting at a small round table in Frankfurt Airport staring out at the tarmac which, all things being equal, I’ll soon be taxied across on my way back home to Trento. While I’m still somewhat cognizant-given I’m working between timezones on a sleepless redeye-I’ll try and record how intense the last ten days were—in fact the life of a Reclaimer is always intense! [Let’s get a drink, kid!] This trip was a whirlwind with two primary objectives: 1) help run a workshop for folks at several schools running Domain of One’s Own, and 2) get Reclaim Video as close to finished as possible. I’m thrilled (and somewhat amazed) that I can now happily say “Mission Accomplished!” —and then some. I’m reeling a bit from the intensity, but at the same time working like that makes me feel pretty alive—I can very easily feed off it, but a crash is never far behind 🙂

The Workshop of One’s Own was Thursday and Friday of last week, and I got in late Tuesday. In fact, I even picked up a stray dog at National Airport who proved a trusty companion for the next few days 🙂 We invited Alan to Fredericksburg so he could speak to the Workshop attendees about SPLOTs, and that he did with some hardcore 70s TV commercial references! The Reclaim Hosting crew came together and re-thought the first workshop a bit: we broke it up into an intense dive into how WHM, WHMCS, and WordPress are integrated to create what we know as Domain of One’s Own. Day two we had a discussion about how various folks are approaching the project on their campus, and then jumped into tools like Omeka, Scalar, Grav, and then a longer session on SPLOTs. I think the tool overviews were not as helpful as we thought they would be, so that might be something we abandon next time. I think the workshop was effective, but we still need to have more hands-on workshopping time. So if we run another in the Fall, that will definitely be a goal!

Team 1 gets to watch team 2 figure out the @ReclaimHosting escape room pic.twitter.com/OO10W8zHCG

One of the cool things Tim and Lauren put together that worked really well was an Escape Room. It was my first time doing one, and it was fun. I think it broke up the intensity of both days to some degree, and it had a great script and was really thoughtful. The quick version: a student is sucked into their computer and it is going to update in an hour and effectively overwrite the student’s existence. So, you need to find the passcode for his computer to avoid this Tron-inspired digital nightmare. Good stuff.

The workshop wiped me out, but I was still able to get a couple of movies in at the Library of Congress, Packard Campus with Alan and Mo Pelzel, specifically My Left Foot and the original Manchurian Candidate.

Will try not to be late for tomorrow’s feature

I have to say I was less impressed with Manchurian Candidate my second time around, but the brief introduction by one of the curators was a pretty amazing homage to Janet Leigh, which made me far more interested in her part of the film. And while this film could not be more timely (geo-political problems with Russia, China, and North Korea around psychological warfare) the whole thing kinda felt a bit flat. That said, Janet Leigh on the train was not, and ole Blue Eyes was pretty awesome too—but I don’t know, how current it felt (or we may want it too feel) was a drawback for me rather than selling point.

Whereas My Left Foot blew me away, I think Daniel Day Lewis is the very best in the business, and he did not disappoint. The pathos of that story, the sense of people in their lives versus psychological or technical defining and controlling them was a real welcome relief. 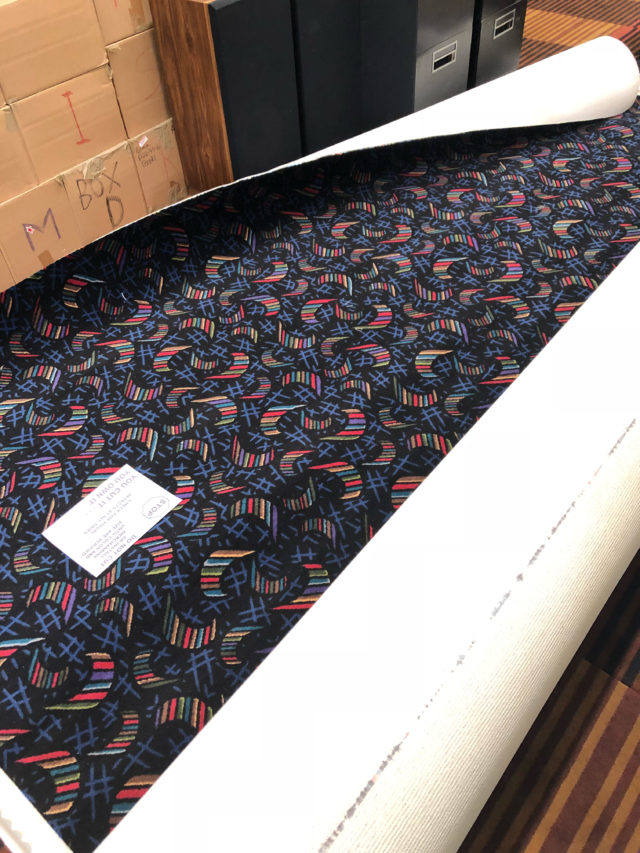 Anyway, after some downtime Sunday morning, I started turning my mind to a bear that had been bothering me since I arrived: laying the groovy new carpet for Fredericksburg’s latest video store. Hmmmm, how to tell this one? Well, I guess tell it straight with a slant. When I was in grad school and living in NYC, which is almost 20 years ago now, I spent a fair amount of my spare time working with my brother laying floors. I learned how to install wood floors, lay tile, and even some carpet. I was better at tile and wood (because those were my brothers specialties), and while I had laid carpet with others—I neither liked it not was as comfortable with it. What’s more, if you have a funky pattern, matching up the seam can be a pain in the ass (more on this soon). So, Sunday I spent time revisiting the carpet laying process and measuring stuff out as well as calling my brother for a quick refresher course. After all of that, I felt fairly confident that we could install the carpet Monday morning, which would give us time to finish the shelves and stock the store on Tuesday. We had a tight deadline because we needed the space at least partially finished to film part of our promo video for #OER18, but that’s classified.

So, Monday morning came around and we started cutting the carpet and preparing the 12′ x 20′ piece for installation. Tim was helping me and everything was going smoothly until we folded the carpet off the wall and glued a 10′ x 20′ section with commercial grade carpet glue (leaving  2′ x 20′ piece unglued to manage the seam). That glue is powerful. After spreading, it was time to roll the carpet back and set it, but after the shift it was 2 feet off the wall. Nightmare. The next 60-90 minutes were the worst I have had in a while. We tried pulling the carpet but it was already setting so we had to go on the glue, which made a complete mess and ruined my boots and Tim’s  sneakers. What’s more, the area was too big and the glue too tacky for us to even adjust the piece. We thought we were kissing $1000 worth of carpet (our only real expense for Reclaim Video besides the awesome storefront sign) goodbye. At one point we were discussing how we salvage the carpet (which was starting to get glue on it), and I was regretting ever deciding to lay the carpet myself. Did I already mention it was a nightmare? After an hour of trudging through glue in our shoes, then our socks, and then bare feet, we finally were able to fold the carpet like a paper airplane and adjust it just right against the back wall. It fell in pretty cleanly, and we were saved! REDEMPTION!!!

Crisis avoided, and we could even get the glue off the carpet before it dried. After what turned into a 3 hour ordeal we finished putting it in and were way too shellshocked to even try and tackle cutting the second piece and thinking through the seam. We just thanked our lucky stars for actually saving the carpet and called it a day. The next day we were back at it, and this went smoother, although we miscalculated the seam by an inch or so, which means the pattern is not perfect, but there is no gap and given the carpet is pretty busy you have to be looking for our mistake. My brother would know for sure. But after our initial call for the refresher, I did not tell my brother about any of this, and I am pretty sure he doesn’t read this blog. A bit of saving face. The final product was actually better then I would have ever have dreamed while I was stepping through commercial grade glue trying to keep from completely freaking out:

The Reclaim Video carpet is finally laid, and I am gonna pretend it went smoothly.

A savvy carpet pattern eye could find the seam, but for all intents and purposes the carpet is perfect for the space, and it really finished it off. Once the carpet was done on Tuesday, we worked on the baseboard, shelves, as well as moving and stocking the counters Tuesday night and all-day Wednesday during a snow storm:

Reclaim Video: “If you will it, it is no dream”

It was amazing how quickly it transformed into everything we had envisioned and more:

The showcase looking good with some Atari 5200, Blip, Reclaim Video shirts, and more

filling up the shelves.

And by Thursday morning we were stocking the shelves with VHS and Betamax tapes, not to mention laserdiscs:

everything we hoped and dreamed ????

It was as done as it could be based on our current inventory, and I could not be more thrilled with how it came together! It made the perfect backdrop for our video work the rest of the day. The only sad part for me is soon after it was finished and we were done filming it was time for me to head back to Italy. It all went so fast! Although I did not leave before finally putting away the innumerable boxes of books that were littering the back office of Reclaim Video, so it felt good to truly get everything on my list to-do this time done.

And while parting Reclaim Video was sweet sorrow, I did snap a couple of selfies to remember it by 🙂

I love you, Reclaim Video

A dream come true, indeed! It was an intense 10 days, but the most rewarding kind of work: helping people manage their domains and creating something fun alongside it!

This entry was posted in Reclaim Video, Workshop of One's Own and tagged ReclaimVideo, WoOO. Bookmark the permalink.

3 Responses to The Life of a Reclaimer is Always Intense