You’ve Got the Network Inside Out 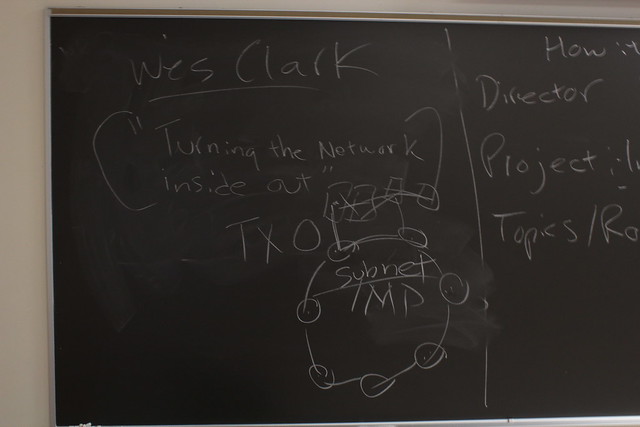 One of the anecdotes related in The Wizards that Stay Up Late that I love occurs during a meeting in Ann Arbor, Michigan in 1967. It was a meeting of all of ARPA‘s principal investigators intended to hash out the architecture of what the ARPANET network would actually look like. Computer pioneers like Larry Roberts, Bob Taylor, Doug Engelbart, Len Kleinrock, and many others, were in attendance. The idea of how to link the various computers at each of the four universities that would make up the original network was being discussed. Fact is, many in attendace didn’t necessarily see the need for resource sharing via a network, they had everything they needed on their own computer. 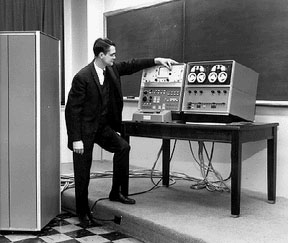 On top of that, the challenge of making four distinct host computers talk to one another seemed far too much work to warrant something few people seemed to need. As the conference was ending, Wes Clark (one of the pioneers of personal computing) passed a message on to Larry Roberts: “You’ve got the network inside out.” The idea was an interesting approach to the challenge of conencting the computers:

Leave the host computers out of it as much as possible and instead insert a small computer between each host computer and the network of transmission lines.

The way Clark explained it, the solution was obvious: a subnetwork with small, identical nodes, all interconnected. The idea solved several problems. It placed far fewer demands on all the host computers and correspondingly fewer demands on the people in charge of them. The smaller computers composing this inner network would all speak the same language, of course, and they, not the host computers, would be in charge of all the routing. Furthermore, the host computers would have to adjust their language just once—to speak to the subnet. Not only did Clark’s idea make good sense technically, it was an administrative solution as well. ARPA could have the entire network under its direct control and not worry much about the characteristics of each host. Moreover, providing each site with its own identical computer would lend uniformity to the experiment.

I love how the idea of the subnetwork solves the issues of each of these machines talking to one another, and this is exactly what Larry Roberts architected into ARPANET. Each of the original four universities on the ARPANET had a Interface Message Processor (IMP) that linked with their computer and was networked with the other three. What I love about the anecdote was that the idea came from Wes Clark, here is the rest of it from WTWSUP:

The most curious thing about the idea was that Clark thought it up. He hadn’t been paying much attention to the proceedings in Ann Arbor. In fact, he was a bit bored by it all. He had already told Roberts in no uncertain terms that he had no desire to put his computer at Washington University in St. Louis on the network. Clark was not friendly toward time-sharing, or even resource-sharing. He had been working on computers designed for individual use and saw no particular reason to share his facility with people on a network. But when he heard the discord over how the ARPA experiment should be deployed, he couldn’t help but hazard a suggestion. Perhaps it was Clark’s antipathy toward time-sharing that enabled him to think of this. By assigning the task of routing to the host computers, Roberts and others were essentially adding another time sharing function. Clark’s idea was to spare the hosts that extra burden and build a network of identical, nonshared computers dedicated to routing.

The historicizing of how these ideas came about is not only fascinating on a technical level, but even more so on a human one. The stories around the individuals who were imagining this remarkable invention make it all real for me. Something imagined and built by poeple with all kinds of different ideas, perspectives, and antipathies. For me this anecdote is a great example that even the most important breakthroughs can be contributed  by someone who isn’t even interested in the project. It’s actually the best argument for sharing resources against one’s will you can make 🙂

This entry was posted in The Internet Course and tagged tic104. Bookmark the permalink.