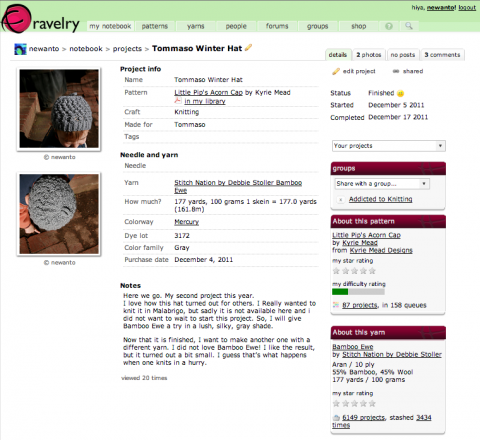 I couldn’t resist the 2.0 designation for the new ds106 assignment bank given that kind of thing is at its nadir in popularity 😉 More than a week ago Alan Levine took me through the new assignment he’s been designing for ds106. I have to say it is pretty rad, and the work he’s done developing this theme is interesting on a whole number of levels. But what struck me most during the walk-through is how he’s taken this opportunity to abstract out the kind of design thinking that’s at the heart of an open, distributed course like ds106, while at the same time materializing it in a WordPress theme that will give anyone the ability to customize their own assignment bank.

For a couple of years I’ve been meaning to write a post about the relationship between the ds106 assignment bank and the knitting community site Ravelry. I think I had conversations with Martha Burtis about Ravelry in early Spring 2011 when she was designing the alpha version of the assignment bank (am I making this up Martha?). Either way, the relationship between the assignment bank and Ravelry came up again during the Q&A of the presentation I gave at the University of North Florida. Like the ds106 assignment bank, Ravelry enables knitters to submit a particular pattern (similar to an assignment in ds106) for others to knit. It has its own page, and you can see who has knitted the pattern, browse what they’ve done, get inspiration from their variations, and even get tips on how they did it.

Like the ds106 assignment bank, the sense of connection emerges around the shared object of desire which in turn enables the emergence of a community. Ravelry is an excellent example of how such a site can foster community, and it’s definitely something more education designers should look to for inspiration. Where ds106 diverges from Ravelry is it’s not centrally controlled, rather it’s a distributed, minimalistic, and syndication driven version of the knitting community.

What’s so cool is that the theme Alan has created captures the essence of a site like Ravelry for building community. The Dog has materialized good community design in a WordPress theme that has immediate applciations for education as demonstrated by ds105, but also has a far broader appeal. I think this is demonstrated by the fact that his example in the demo for the “things” (a generic term for assignments, patterns, etc.) was a series of  food recipes. You want to see the design thinking behind ds106 that proves the work we’re doing with this class can be abstracted to a wide range of disciplines and various contexts? Watch the following video, and behold the greatness that is CogDog!