A Bird’s-Eye View of UMW

A year and a half ago Cathy Derecki and I sat down to talk about possibilities for taking the semi-annual “Faculty Notes”—UMW’s print-version of what faculty have been doing professionally—online. The idea we came up with was to make an online, weekly “Newsletter” (for lack of a better term) that not only features the work of UMW faculty and staff, but also shares top community stories, campus events, and more general happenings around the university. It would all be posted on the EagleEye site as well as emailed every Thursday afternoon as an HTML-based newsletter to all UMW staff and faculty. 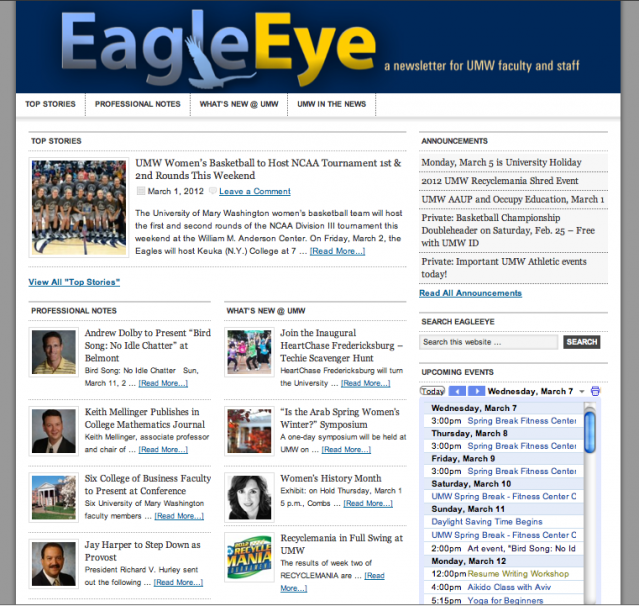 A year and a half later EagleEye has become a community gem for fostering awareness of what is happening intellectually and culturally around UMW. What’s cool about the model we’ve set up is that anyone around campus can post information to the site. All you need is a UMW Blogs account—yes, this is hosted on UMW Blogs, but mapped onto a umw.edu domain :)—and request to be added as an author to the site. As of now we have more than 100 different authors and almost 1400 posts—which works out to almost 3 posts a day every day for the last year and a half! 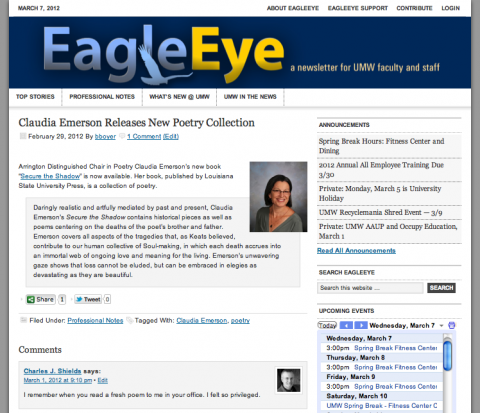 What we effectively did is allow faculty and staff to login and immediately author and publish what they have been doing professionally as well as encouraging them to publicize events and happenings around campus (you can see the workflow here). And while faculty and staff were a bit reluctant to promote their work early on, after a few months of the weekly newsletter arriving in their inbox featuring the work of their peers it seemed far less a stigma of “shameless self-promotion” and much more a community good. Let’s face it, it’s a very beneficial thing that everyone in an intellectual community has a sense of what everyone else is working on. A quick way of sharing the work we are doing as well as promoting what is best at UMW is a bonus for everyone. What’s more, it is right inline with the philosophy that everyone loves to be featured, it is an important piece of recognition that universities need to foster within the professional community, and EagleEye proves to me that something as simple as a WordPress site can do that brilliantly.

This entry was posted in umw, UMW Blogs, umw.edu, WordPress. Bookmark the permalink.

1 Response to A Bird’s-Eye View of UMW