A Ride on the Grav-y Train 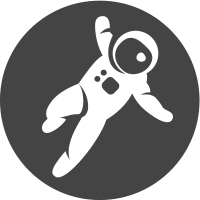 This week I am trying to prepare some resources for our second workshop for folks running a Domain of One’s Own on their campus (i.e., Workshop of One’s Own).  We had a great response the second time around, and we’re continuing to fine-tune the offerings, to some large degree based on the workshop Lauren and I did at Colgate last Fall. One of the big changes is dialing back a bit of the sysadmin focus which took up much of the two days the first time around. We will be focusing on the technical elements of running and supporting Domain of One’s Own for much of Day 1, but Day 2 will be dedicated towards approaches to Domains with faculty and student s as well as showcasing applications like Omeka, Grav, and Scalar (in addition to the rock all our work is built upon: WordPress). What’s more, we are bringing in some Stray Dog from Strawberry, Arizona to talk SPLOTs with Lauren. It will be interesting to see how things go with the new approach, which seems a bit more balanced between managing the system and promoting the options across campus.

As part of this new approach to the workshop I volunteered to do a quick session to highlight the open source, flat-file content management system Grav. It’s one of the applications we feature through Domain of One’s Own, and I have been closely following Paul Hibbitts tireless work to promote Grav in higher ed for some time now—he is a wonderful ambassador for the app. I can deeply relate to his work around Grav given I have an intimate understanding of what it means to try and convince faculty to adopt a new tools for teaching and learning.

So, all this to say I wanted to finally dig into Grav so that I could actually talk about it intelligently. I decided to install a Grav as a package, this is something Paul worked with Tim Owens to make available through Reclaim Hosting. So, rather than just a vanilla Grav install, you can choose from several packages of Grav, each of which comes with a pre-defined theme, plugins, pages, etc.

I decided to install the Open Course Hub, which is a packagePaul developed. Here is how he explains it:

Grav Open Course Hub with Git Sync is designed to give tech-savvy instructors an open, collaborative and flexible platform that they can partner with their current Learning Management System (LMS).

One or more Open Course Hub pages can also be seamlessly embedded into another system (i.e. LMS) with the ‘chromeless’ feature. For example, view a Open Course Hub site and then view the same open and collaborative content embedded within a Canvas LMS site.

A couple of things about this description are interesting. First, Grav is definitely for faculty who are pretty familiar with markdown and want to start playing with something a bit more experimental. What I think is pretty cool about Grav is the fact that it provides an  platform to start wrapping one’s head around technologies like Git via Github. It provides a fairly straightforward framework for creating pages and inserting media, and the Git Sync plugin wizard Paul setup for the Open Course Hub makes getting your Grav site into a Github repository quite easy. I dig that, and if you did want others to fork parts of your course (whether weekly assignments, syllabus, etc.) you immediately have Github as a platform for accomplishing this. I am going to see if I can get the Grav site I created to work as a Jekyl site on Github, and if it can there is a pretty good argument there for archiving and exporting—though all of this would require someone who wants to get their hands dirty a bit. 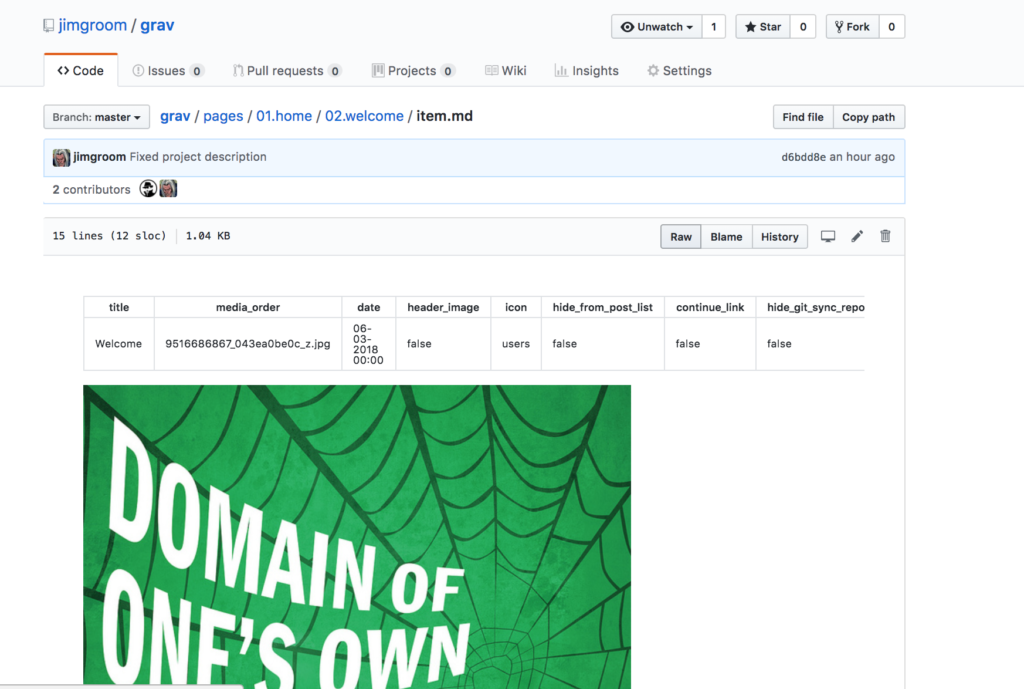 The other thing that I’m interested in is the possibility of seamlessly embedding a Grav site into an LMS. The example he cites is this Simon Fraser University course. I need to get a clearer sense of how this is working—but the idea of embedding a course you created on the open web seamlessly into an LMS might have some appeal. The Chromeless idea is interesting as well, it’s an inactive project from the now defunct MozillaLabs that was trying to re-imagine the web browser interface as a simple HTML, CSS, Javascript app:

Instead [of] building a whole new platform, we suggest that the web itself should be the platform. That a developer could design the browser using standard web technologies combined with a minimal set of new APIs to interact with the underlying operating system and control the application’s user interface.

It seems to be related to the idea of creating headless sites and increasingly decoupling data from architecture. In this vein, Chromeless is a headless browser, only dependent on the basic web standards and “a new set of APIs.”  The idea of headless is everywhere I look now, Bryan Ollendyke’s blog post for EDUCAUSE talks about the headless authoring experience (HAX) he is working on with his ELMS Project.* I’m still afraid to ask if this is all built on top of Drupal though 🙂

Anyway, the idea that Paul is pointing to with Grav that is most appealing to me is that it can provide a means for sharing content both inside and outside the LMS. How seamless that is still remains a question. As for outside the LMS, Github is a fairly steep conceptual and technical learning curve for many, so that would not qualify. As for embedding from Grav to Canvas, I guess that is something I need to learn more about.

I’ll blog more about Grav here shortly as I work on a site in Grav for the workshop, but I really appreciate the opportunity to play around in something other than WordPress—as much as I love it. It puts me back in the position of starting from scratch with a technology and trying to figure out how the hell it works and pushes up against many of the frustrations people I support have with this stuff. It helps me not only explain it, but extend a bit of empathy with those who might have similar experiences with technologies that I take for granted.

*Bryan’s blog post is the first concrete example of the NGDLE I’ve actually read through EDUCAUSE. Until now it was increasingly seeming the NGDLE was little more than vaporware despite all the ink shed in its promotion.

This entry was posted in Workshop of One's Own and tagged Grav, WoOO. Bookmark the permalink.

4 Responses to A Ride on the Grav-y Train