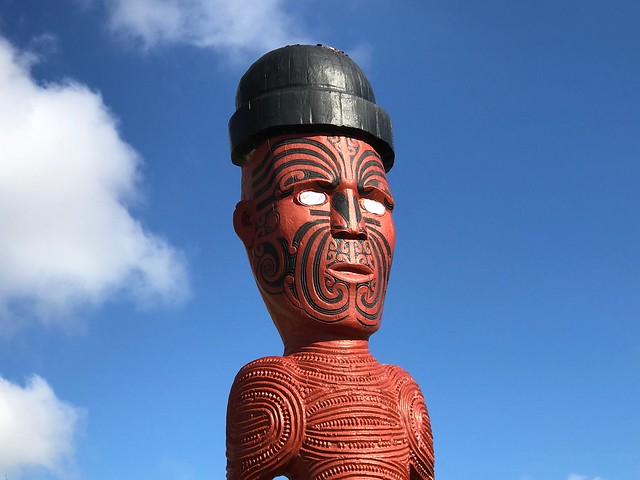 I try not to take for granted how lucky I have been over the last 10 years. And when I specify the last decade I mean, in particular, my “career” as a presenter. I’ve been pretty consistently presenting about my work on everything from WordPress to UMW Blogs to ds106 to Domain of One’s Own for 10 years now. Along the way I’ve been fortunate enough to go to a ton of different places and meet all sorts of cool folks. It’s been a privilege, and I’ve been patiently waiting for it all to dry up. I mean how many times can people listen to me bashing the LMS? I’m tired of me.

That said, since coming to Europe my talks have gotten a bit of a second life. I’ve been on a bit of a tour around Europe for the last 18 months, and that has been fun as hell. But earlier this month I probably got the biggest invite of my meager career, a trip to new Zealand to speak at THETA 2017. I wrote about the conference and my presentations here and here, so this post will be about the awesomeness that is New Zealand. When I got the invite many months ago, I immediately thought about a conversation with Alan Levine back in 2012 while he was staying at Casa Bava. I asked him of all the places he had been, what was the most beautiful. He almost immediately responded New Zealand, and added you gotta see the South island. So 4 or 5 years later when the offer came I jumped at it. What’s more, I knew, if possible, I would try and actually play the tourist as well—something not always possible when traveling for work.

But things got 1000x better when it became apparent Antonella would be able to come with me, with the kids could safely back in Italy. New Zealand was shaping up to be an epic trip. With Antonella’s penchant for research and Nigel Robertson‘s seemingly endless generosity, we began to come up with a plan for the visit. We would arrive the Saturday morning before the conference, and see Rotorua and either Mt Doom or some of the beaches on the North Island Saturday and Sunday. After that we would head back to Auckland and lock-in for the conference over the next several days. Well as they say, the best laid plans…we got delayed almost an entire day in Verona, Italy and were re-routed through London and Los Angeles. As I already posted about, we literally lost all of May 6th and arrived in Auckland that Sunday morning. This wreaked havoc on our plans for exploring the North Island Saturday and Sunday, but we got a 5 AM pickup (thanks Larissa!) from the Aukland International Airport and got to see One Tree Hill at Sunset, which was quite the view of Aukland: 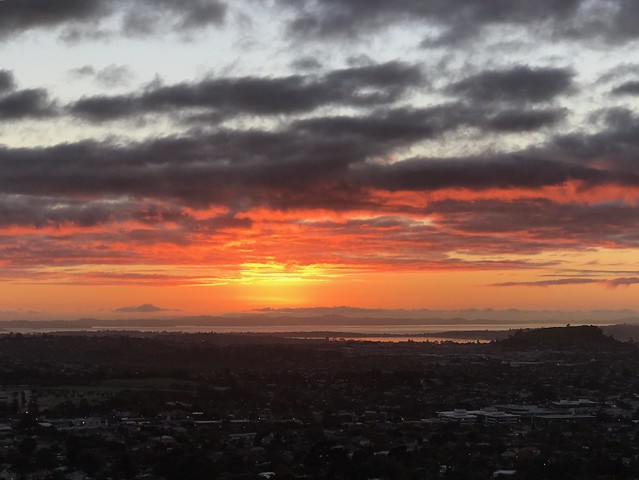 After that we got breakfast at an awesome spot in Morningside called Crave. It comes highly recommended. Not only was the decor amazing: 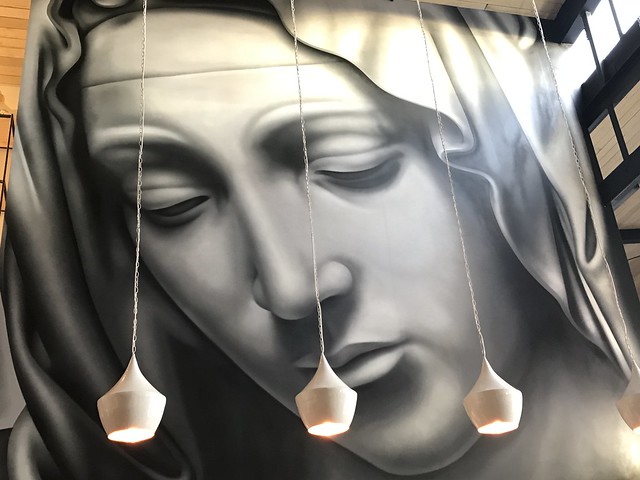 But they also had a quite impressive toy section: 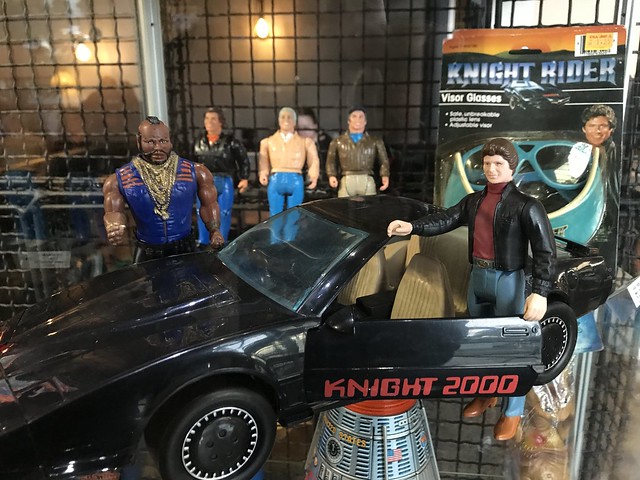 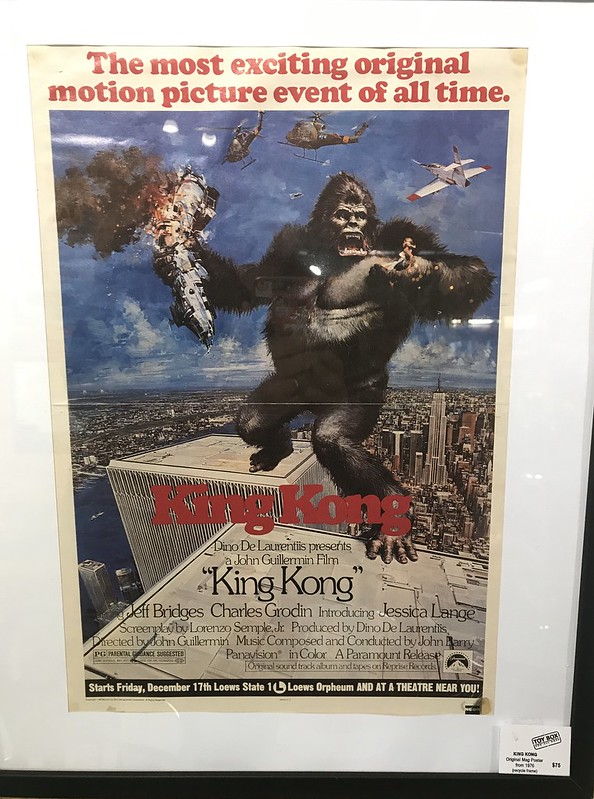 After breakfast we headed to see the venue and drop off our bags at the hotel.  We met up with Nigel, and were able to recoup a little sightseeing time by heading over to Devenport on the Ferry, and that was really quite gorgeous. I’ll let a few pictures speak to that: 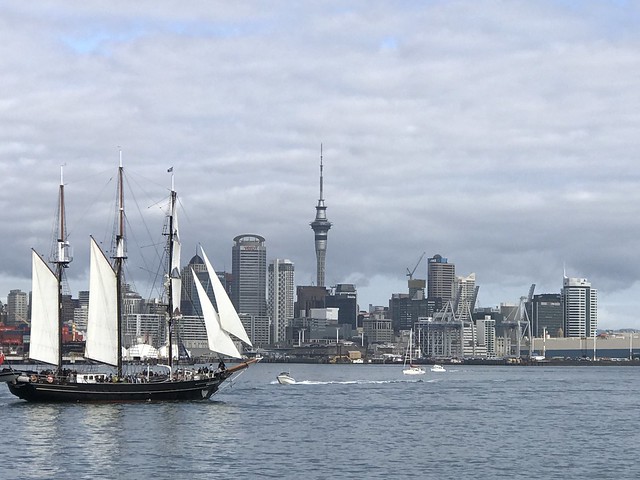 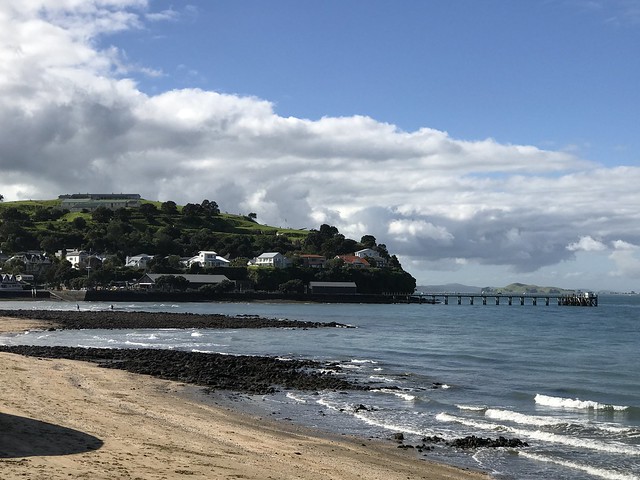 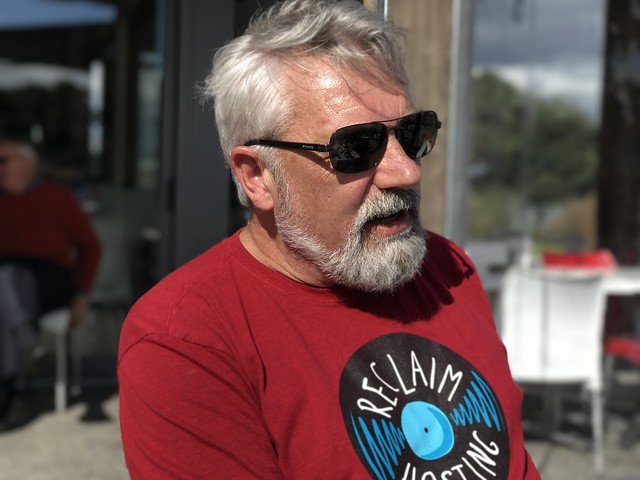 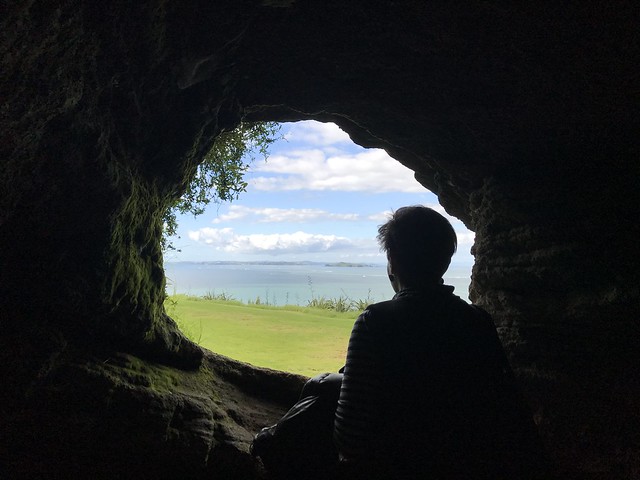 After Devenport we went back to the hotel and crashed. That would be the beginning of a 3-day battle against the jet lag.  The time difference from Italy to New Zealand is no joke. The next few days were pretty locked in conference wise, Antonella was able to see the Aukland Art Museum, which she really liked, and after the presentations the folks at THETA through an impressive gala on the waterfront with live entertainment, good food, and a DJ. I was impressed that with the first sign of  DJ a fair number of the 500-600 people attending got up to dance. 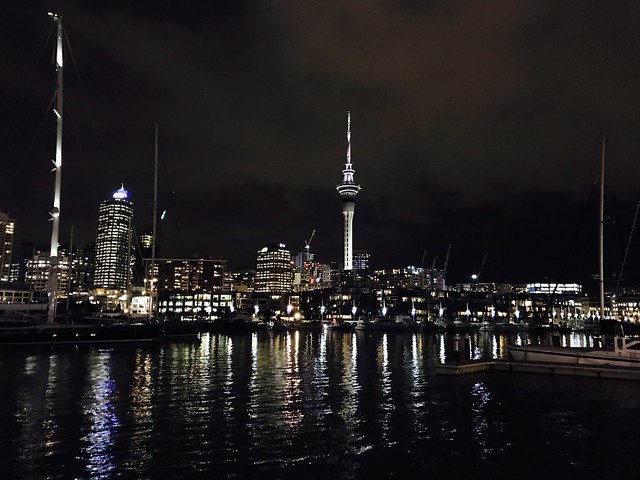 We skipped Wednesday of the conference and tried to make up some of what we missed of the North island over the weekend. We drove to Hamilton to meet up with Anne Robertson who was kind enough to accompany us on a day trip to Rotorua. While briefly in Hamilton on the way there, I got to see the South Pacific headquarters of #ds106radio—it was quite the honor. 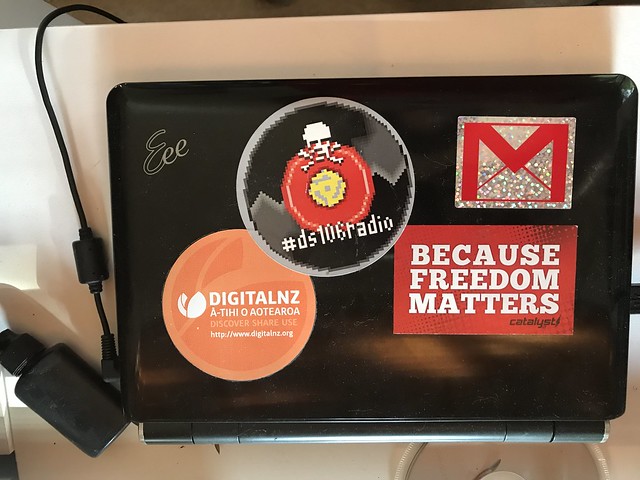 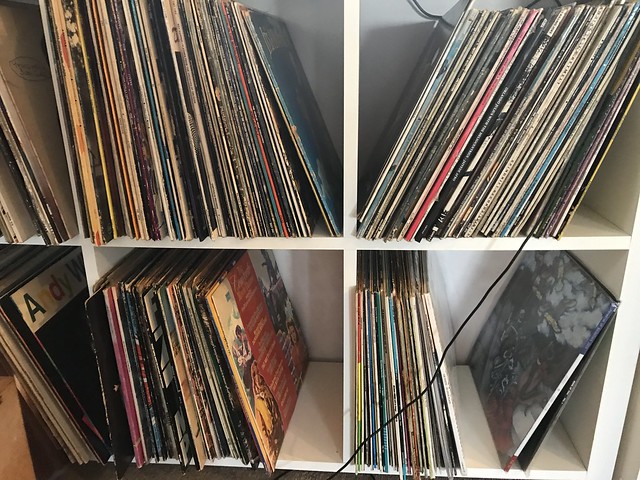 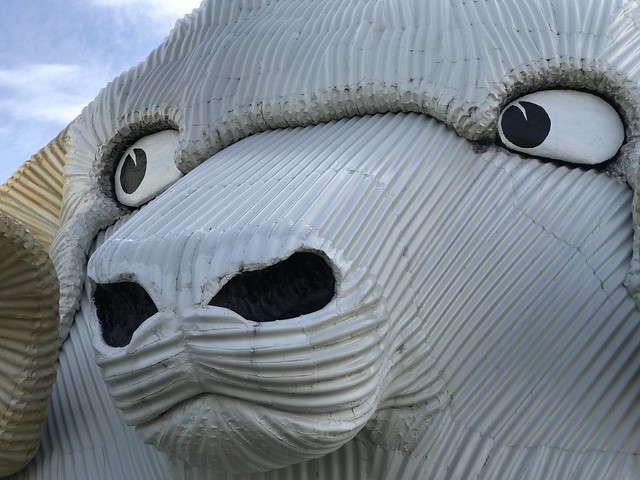 After an hours drive from hamilton we made it to a Maori Thermal Village in Rotorua (Whakarewarewa). 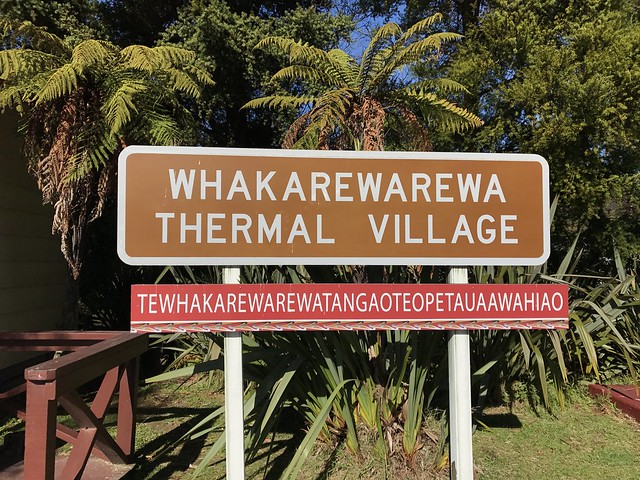 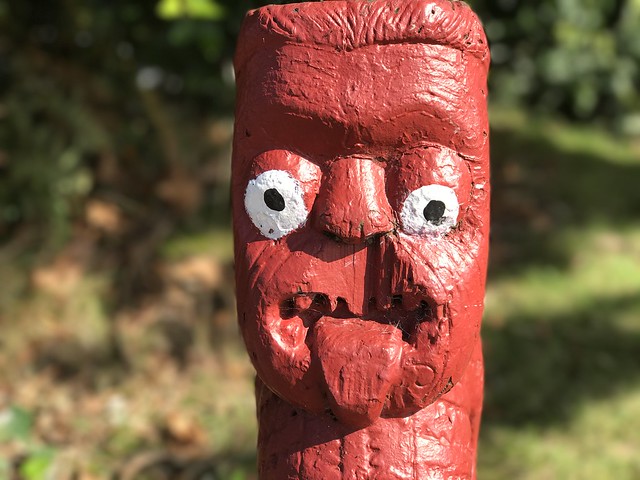 Possibly one of the wildest things I witnessed while in New Zealnd was the thermal springs of Rotorua. This place was literally boiling. 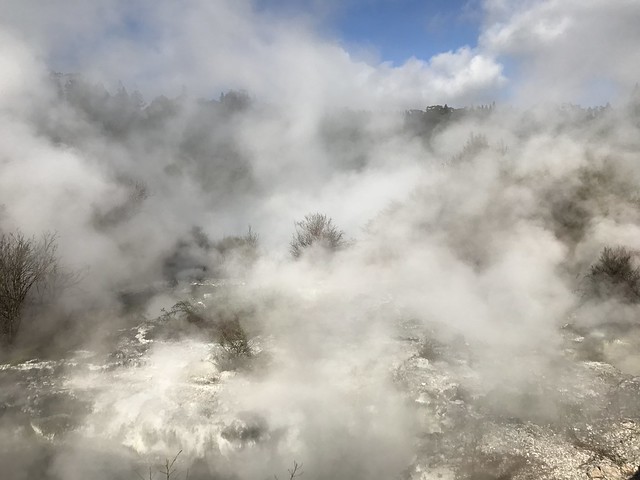 I took a short video of some of the springs around the village, and they were truly amazing.

Anne Robertson captured this shot of my taking the above video, and the scene was as close to being cinematic as I’ll ever be. I felt like I was part of a Terrence Malick vision for just a moment. 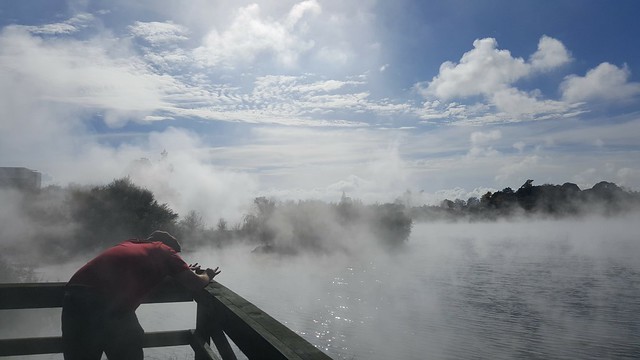 The springs were also all around the village, in fact below is a picture of a house that was condemned because a spring popped up in the kitchen, forcing the residents out of the house. 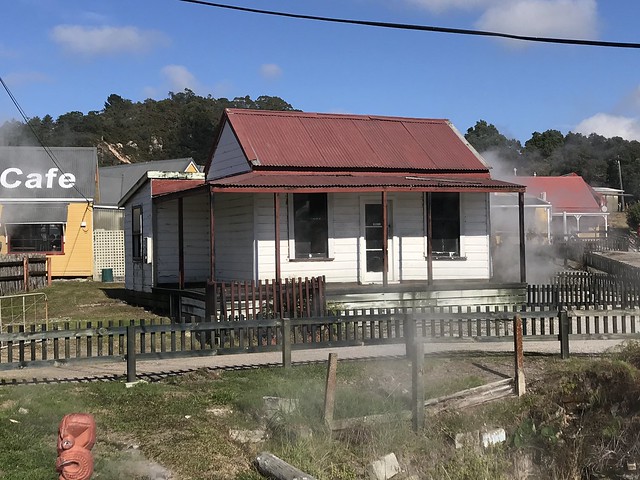 The water was used to cook various foods by the villagers, and below is an image that gives you a sense of how the crust of the earth seems pulled back to show the boiling core below. 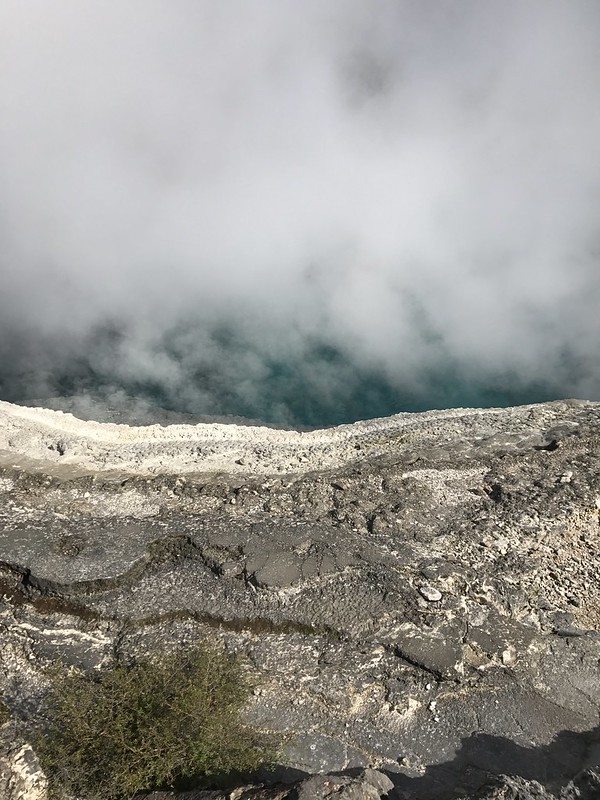 We drove 20 minutes outside of Rotorua to a place called Kerosene Creek, which was an active warm-water stream complete with waterfall.  We were well prepared by Anne and Nigel for this wonder, so we brought our bathing suits and went for a warm water swim in late Fall. I did not want to leave, it was the most perfect bath ever. The evaporating haze above the water says it all. 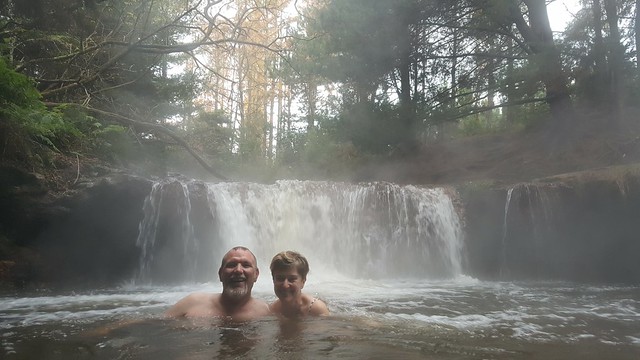 That was just about all we would see of the North island outside of Aukland. I am well aware we missed a ton of beautiful mountain and beach spots, but doing this island any justice in a few days is impossible. You would need years, but I would settle for weeks or months—all the more reason to return.

We returned to Aukland on late Wednesday night.  We drove back and forth to Rotorua from Aukland in one day (after a nice dinner with Nigel and Anne) and I have to say after more than 3 weeks of driving on the wrong side of the road over the last 18 months, I am almost used to it, which is a huge relief because that was a serious source of anxiety for me in Scotland, England, and Ireland. I spent the final morning in Aukland speaking with the good folks at the Aukland University of Technology about Domain of Ones Own. It was a real pleasure to finally meet Thom Cochrane, and the work he is doing with his colleagues around Mobile Social Media Learning Technologies. In particular, he adopted and adapted the #ds106 assignment bank theme Alan Levine developed a couple of years back, you can see it here. It was cool to hear Thom talking about his first meeting with Alan when he came out to New Zealand for the first time back in 2004 spreading the gospel of blogs and wikis, it put a smile on my face. Folks like Alan having been doing this work for a very long time, and to hear that from Thom who has been locked in for just as long gives me great hope. We remain a network of people. 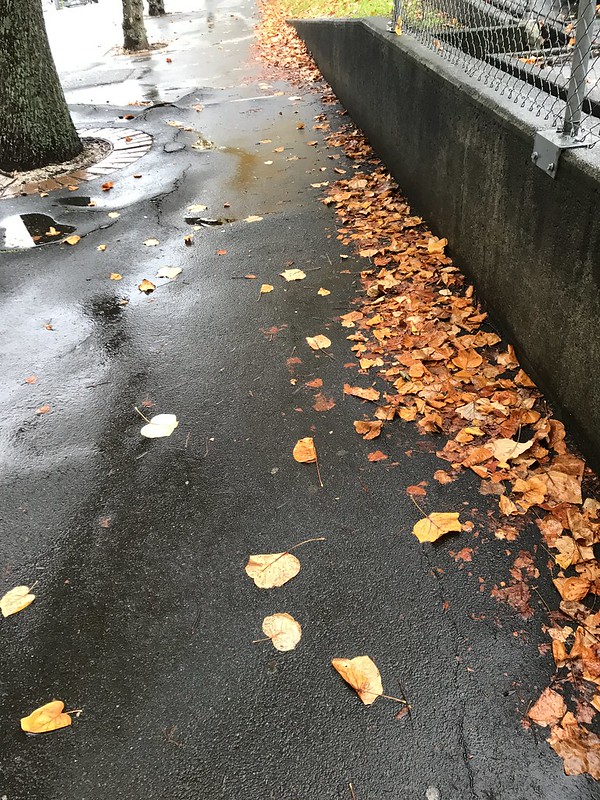 The final morning in Aukland was rainy and very Fall-like. In fact, May is New Zealand’s October/November. So weird. I really love how upside down the whole place seems to a Northern Hemisphere mindset. And, in that vein, we were about to fly South to Queenstown in order to head what us upper hemispherical folks would consider North, as Antonella continually remarked on. But this post is already way too long. So I’ll try and capture the marvels of New Zealand’s South island in part two of this post.

This entry was posted in fun, travel and tagged Auckland, New Zealand, Rotorua. Bookmark the permalink.