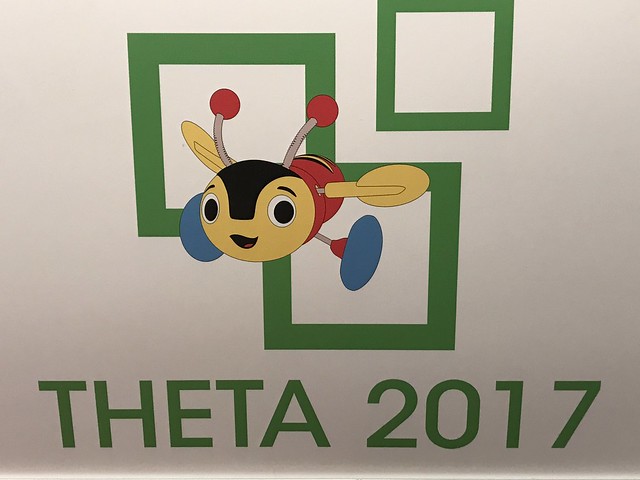 It’s a couple of weeks now since I was at THETA 2017 in Auckland, New Zealand and I am almost fully adjusted before my next trip in a week. It’s been quite the year for travel so far, after the Fredericksburg, Oklahoma City, and LA trip that will span almost 3 weeks, I’ll have been on the road for 3 of the first 6 months of 2017. bava in motion!

As a result of all the travel, I have a backlog of posts stretching all the way back to my Sweden trip in February. It’s really hard for me to blog regularly when on the road. I’m a creature of habit and blogging is part of that routine, travel wreaks havoc on my routine (for better and worse) and increasingly I need more time to adjust before and after any given trip. That said, the time in New Zealand was amazing, I’ll expand on that more in my next post when I’ll talk about some of the non-THETA 2017 travel around the North and South islands. But for now, let’s talk about the conference.

#edupunk @jimgroom giving a #retrofuturism tour earlier at #THETA2017 . #Data is the new oil but how do we secure our own #personaldata ? pic.twitter.com/zoAdcalsrs

I blogged the night before my presentation about my approach to this talk, and overall I think it went pretty well. I had 45 minutes and it turns out I had a bit too much material.  I should have left the UMW Console stuff I opened up with on the cutting room floor. I really do enjoy talking about it, but it was a bit of a time sucking tangent despite my attempt to tie it in talking about 1984 visions from Sweden of technology. If I had left it out I would’ve been able to show examples of student, faculty, and course sites when talking about Domain of One’s Own, as well as the video from Michigan State University College of Arts and Letters.

#theta2017 the cardinal sin of HE: ignoring the importance of personal data @jimgroom pic.twitter.com/2NpWQb1laC

So the preamble on UMW Console was definitely something I would have cut given the time constraints. That said, the talk looked at visions of the future from 1984 with the Console and the Swedish TV clip linked to above, then moved to 1955 while discussing EDUPUNK and the The Glass Bees, and then moved to 1975 with a discussion of The Twenty Days of Turin. I do think the pairing of The Glass Bees and The Twenty Days of Turin worked well in terms of balancing the long history of the imaginary that has predicted our current technocratic moment, while redirecting the critique of our current crisis around digital literacy, privacy, and personal data to higher education’s “inattentiveness toward that which seems invisible around us” —or how the web works and what it means for us culturally.

The calm before the storm. The auditorium before @SarahNisbet takes the stage talking #innovation. #THETA2017 @THETAConference pic.twitter.com/XTxlP3VQZr

I appreciated the presentation space, it was a gorgeous auditorium, and there was both a slide monitor as well as visible timer so that when I realized I had a minute left I could re-calibrate to summarize my remaining slide in a sentence or two and bring the talk to a conclusion smoothly. Fact is, I had made my point about the importance of paying attention to the invisible infrastructure that everywhere frames the information we depend on, so I could simply re-iterate that and leave the examples for another time. I think the advantage you gain as a result of presenting regularly about the same basic topic over the course of 10 years is you can adjust fairly quickly when you mess up your timing. Also, this year’s presentations have been fun because since February I have been thinking of each talk as an iteration of the last. Antonella has seen at least two of my talks in that period, and her feedback and critiques have been crucial. I do think I’ll give some version of this talk again, in fact I submitted The Twenty Days of Turin bit of this talk to the International Conference for Educational Media happening this September in Naples.

“The 20 Days of Ed-Tech: What 70s Italian Horror Fiction has to Teach us About the Perils of Social Media in Education”

This presentation will use the 1970s horror novel The Twenty Days of Turin as a lens to examine the current state of digital agency in higher education. The organizing principle being institutions, professors, and educators have failed to prepare students for the shifting geopolitic that is the web: encompassing everything from basic digital literacy to considerations of online privacy to a wholesale offloading of educational environments (and by extension student data) to vendors. All of which begs the question how can we empower faculty and students within education to harness the distributed,
decentralized vision that drove the foundation of the web to reclaim the “green spaces” of the web that are now everywhere mediated by corporate controls.

We’ll see if that gets accepted, it would be fun to create an entire presentation by way of a close reading of that novel.

The system is unsustainable & unaffordable argues @jimgroom for the naysayers, and it's a conspiracy! #greatdebate #hilarious! #Theta2017 pic.twitter.com/aKRohvrM1H

That last bit about THETA 2017 was I was invited to be part of “The Great Debate,” a session which was built around the question “Do Higher Education’s best days lie ahead?” I was asked to be on the negative side where I joined a team that argued against the above statement. Can someone say softball? I had not really prepared for the debate, but luckily my teammates Kerry Holling and Anita Schjøll Brede took the lead. In fact, Kerry had done extensive prep, and one of his main sources was Bryan Alexander’s monthly newsletter Future Trends in Technol0gy and Education. Gotta love that the Ed-Tech Goth Man extraordinaire has a well-deserved and quite loyal following down under. Kerry was going to talk about the changing model of access that to MOOCs and various other resources, Anita was framing the role of AI in undermining the relevance of faculty, and taking a role out of the OER marketing textbook I decided for the easiest path: the increasing costs of higher ed. I used my own personal journey in 1989 from dropping out of GMU because my family could not afford it to heading to Long Beach City College and paying $35 a semester while working as a bus boy to paying my way through UCLA at $500 a quarter. I am American, after all, a little Horatio Alger goes a very long way 🙂 After that, I cribbed Kerry’s notes from Bryan’s newsletter and talked about how sky rocketing costs for an education in the US paired with a casualization of the workforce spelled higher ed’s doom. And this is not a recent phenomenon we can simply blame on Trump or DeVos (as much as I would have liked to), but a 35 year old trend in the US that has only intensified in recent years.

Last year student debt in US was $1.3 Trillion. Labour is being casualised. How do Unis look after people? #TheGreatDebate #THETA2017

I had 5 minutes to speak, and I really can’t remember exactly what I said. I think I did blame the audience, called them eunuchs, and generally was in prime reverend form. The funny thing is that folks were laughing and having a blast, but I was dead serious. I was in full fire and brimstone mode, it was scary how easily I became a harbinger of death and destruction. I imagine it as some minuscule taste of what Cormac McCarthy felt like while writing Blood Meridian 🙂  That said, the debate was fun, even if negativity won the day—sign of the times?

So, that is my post mortem post on THETA 2017.  I’d like to give a special thanks to Nigel Robertson for putting my name in the mix to speak. #ds106 is #4life. It was truly a great experience, and the conference was just the beginning of my amazing time in New Zealand.

This entry was posted in presentations and tagged presentation, theata17. Bookmark the permalink.